The Ataturk Cultural Center: The New Cultural Icon For Istanbul

ISTANBUL  Just last month, the new Atatürk Cultural Center (AKM) was introduced in Turkey.   The new contemporary culture center will appeal to a general public greater than other facilities have previously been possible to accommodate.  Although it will mainly serve as a new opera house, the center will also have venues ranging from cinema and theater to exhibition halls, cafes and restaurants.

The Atatürk Cultural Center will be built to accommodate performances of international stature and designed to contemporary requirements and current technologies. As a very comprehensive urban structure, the center is also expected to be a major attraction for the city’s residents and thousands of tourists visiting from around the world.  The announcement of the new Ataturk Cultural Center was made by Turkish President Recep Tayyip Erdoğan. 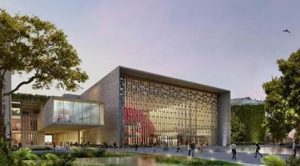 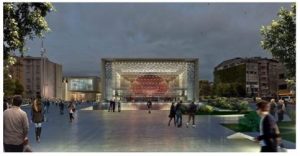 Murat Tabanlıoğlu, founder of Tabanlioglu Architects, architect for the center, said: “It is very gratifying to have taken over such a heritage, beyond that, of course, we see this building to be a permanent cultural symbol for Turkey and the world. I was very excited to be invited by the Ministry of Culture and Tourism months ago to work on this project.” He shared his feelings and added,” Since the needs and functions of a cultural establishment and the building have changed over time, they have to be renewed in spatial, structural, and modern terms with current solutions. It is inevitable to incorporate technical requirements and possibilities into such a structure, especially at the point of performing a very special and complex function like opera. Eventually, architecture, technology, infrastructure and systems needed fresh blood for the performance of opera and ballet, and the recent condition of the center did not meet the need, moreover like people, in terms of structure the buildings get old and weaken. So, of course with the principle of staying true to the collective memory of the city, we kept the dimensions and its significant façade of the 60’s, and conveyed the building into the 21st century. ”

The building is planned to measure highly on sustainability criteria, and evaluated to the highest standards of technological performance and architectural design, in the context of its surroundings as well.  AKM will be one of the world’s most prominent opera houses and cultural centers, providing unrivaled, rich performances that often require complex technologies for staging, lighting, and acoustical excellence.

The arts and culture units articulated in the main building, which will have 2500 seats, include a large hall with natural acoustics. Hence, the new AKM will be transformed from a single unit into a large, comprehensive cultural complex.

Alternative and secondary features such as smaller concert halls, theater halls, cinemas, libraries, design shops, and cafes and restaurants between them, will be located at various levels along the culture street that is passed through the annex; the low-rise serial buildings connected to each other, and ultimately to the main building, via their lobbies. These capacities are also independently accessible from the street level.

Through the cascading extension with a green landscaped roof, a second entry, or a secondary piazza, is granted that will be formed in the direction of the congress valley where Atatürk Library and Technical University are located.

Being public buildings, one of the most notable elements of opera houses are squares. AKM defines the edge of the Taksim Square, and the new project enhances the relationship with its unifying and connective accomplishment through art and cultural activities.

More transparent than the old one, AKM’s façade will be reconstructed,  enlivened by one of the biggest screens of the world, so that the performances realized on the stage inside will simultaneously broadcast on the screen for the public, through high quality display.

This transparency will provide a clear view of the red outer shell filling the volume of the main opera hall; the powerful image of the bright semi sphere will emphasize the presence of the Opera House.

On the roof of the main structure, there will be a restaurant affording panoramic views of the Bosphorus. Along with opening the spectacle to public, it is envisaged that this meeting place will provide opportunity for financial support for the operation of the cultural center.

Besides the unquestionable cultural advantage to be gained through the re-establishment of AKM,  local products and natural materials will be used in the construction, recalling the fact that many of the materials came from abroad during the period when AKM was first built.  Now, thanks to the modern production capacity that Turkey has achieved today, local products will be used.

A New Center in the Context of a Great City, with a Keen and Sensitive Eye to the Past

Architecturally, with its multi-layers and alternative functionalities, AKM is also defined as a basis for sociocultural consensus; a valuable metropolitan tool that lives every hour of the day, with contemporary aesthetics and a high representation value, and at the same time, an inclusive and embracing urban magnet.

One of the most important modernist buildings of Istanbul, AKM will survive preserving its significant values through the creativity and richness of the original architecture while updating the requirements of its functions, as well as meeting the qualities of urban life of the new century.

The new Ataturk Cultural Center, planned to be completed in 2019, will also serve as a case study on the architectural structures of the 60’s, a base for academic discussions in setting the principles of their protection and preservation, as many of the countries in the world today retain much older buildings, while the 1960’s buildings are being demolished.

Headed by Murat Tabanlioglu and Melkan Gursel, the practice focuses on residential, commercial, mixed-use, public and cultural projects realised mainly in MENASA, CIS and Europe, and lately in the USA.  Tabanlıoğlu Architects has a long family tradition and is the culmination of over 60 years’ architectural experience. Tabanlioğlu Architects believes that one of the big issues inherent in urban development is to create city spaces that are interactive, to allow citizens to truly mingle; that in order to make better cities; buildings should be multifunctional and take inspiration from both ceremonial and informal public spaces.  With offices in Dubai, Doha, London and New York, the practice strives for new efficiencies in terms of global and environmental needs, incorporating new technologies with smart local solutions into their work. For more information about Tabanlıoğlu Architects, visit www.tabanlioglu.com.