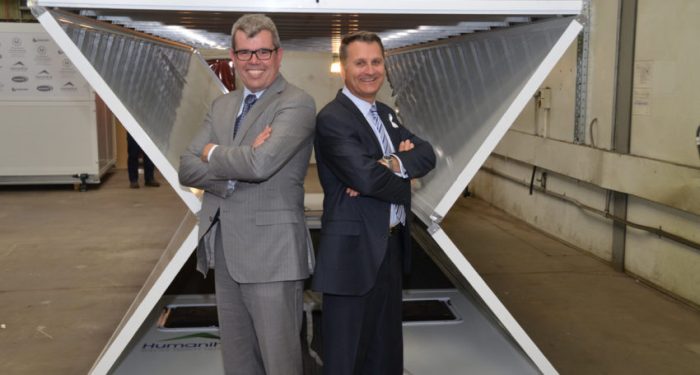 Parul Dubey on December 19, 2017 - in Buildings, Structural components
Humanihut will deliver its first ‘Base Camp’ to South Australia’s State Emergency Service (SES) in the first half of 2018.

The autonomous camp can be transported on trucks in six 20-foot shipping containers and can be assembled by five people and a forklift in four hours.

The camp includes includes 32 dormitory huts that sleep up to eight people, two bathroom containers, a community room and a canopy shelter.

Humanihut started in 2013 in the South Australian capital Adelaide with an idea to help house the thousands of refugees in the Middle East, North Africa and Europe.

The Base Camp model is the starting point for the fully scaleable design, which also has a “Village” model suitable for refugee camps of up to 2500 people.

Co-founder and Managing Director Neale Sutton said the first deployment to the SES was a “huge” milestone for the company.

He said although the camp, with four double bunks in each dormitory hut, could sleep 256 people, the SES planned to use it for 128 personnel, reserving the ground level bunks in each hut for luggage and equipment storage.

“There’s quite a lot of expectation globally but the international market was looking for some confidence in the product and wanted to see an Australian buyer to be the first,” Sutton said.

“It will be mainly used when they have to set up a deployment for fighting a major wildfire but it can be used in any event where emergency services are sent to support a community that’s been hit with some level of crisis.

“It’s a mobile camp so the emergency services personnel can come into an area to add value to either fight the fire or conduct the cleanup without drawing off the local infrastructure.”

The walls of the huts are steel skinned and insulated, helping the shelter to maintain a comfortable temperature, and have a lifespan of at least 20 years.

About 65 per cent of the volume of each hut is manufactured in South Australia with help South Australian companies Enviroclad and Kadego. The remainder, including the fitting inside the shipping containers for transportation, is done in China. Sutton, who spent 35 years in the Australian military where he undertook senior roles in response to humanitarian crisis, said the company would use the first deployment as an opportunity to target similar agencies around the world.

“Now we’ve got our foot in the door we will be introducing ourselves to all the emergency services agencies in Australia and New Zealand and we’ve already started conversations with their compatriots in the UK and US,” he said.

“We’re also dealing with the Italian Government who are looking to put refugee camps into Libya.

“The State Emergency Service in South Australia conducted due diligence that involved an eight-month operational evaluation against known competitors so not only have we won a sale, we have won a competitive evaluation and that’s important because other governments like the comfort of knowing that someone else has already conducted their due diligence on us.”

The camps have a payback period of 3.5 years when compared to the cost of replacing tents in a refugee camp setting. Sutton said this would save the camp managers millions in maintenance and tent upgrade costs over its 20-year lifespan.

However, Sutton said in a refugee situation the huts were not designed to be an immediate response to a crisis.

“It’s not designed to be as quick as a tent in the first instance,” he said.

“When it comes to refugees and displaced people, we are there to put them into comfortable accommodation after the event has occurred because the average time a refugee spends in a camp around the globe is 12 years.

“So we don’t rush to the site, we plan and move carefully with the client to ensure that at some point within six months we can deploy a comfortable camp that will last them 20 years.”

Humanihut is looking for a significant investor to help it ramp up its production to tackle larger projects.

“We have no difficulty in delivering the smaller solutions like the SES Base Camp but if we want to get to a point where we can really take effect quickly on the international market then we are looking for an investor to join us and help us to do that,” Sutton said.

The $941,000 SES Base Camp was funded through the National Partnership Agreement for Natural Disaster Resilience with the South Australian and Australian governments providing $470,500 each toward its purchase.

South Australian Manufacturing and Innovation Minister Kyam Maher said the base camp would allow SES members and volunteers to get the rest they needed between shifts when attending major natural disasters like bushfires and floods.

“Adelaide is rapidly becoming the default place for innovative companies to start and grow their business, and the state-of-the-art Humanihut is testament to that,” he said.