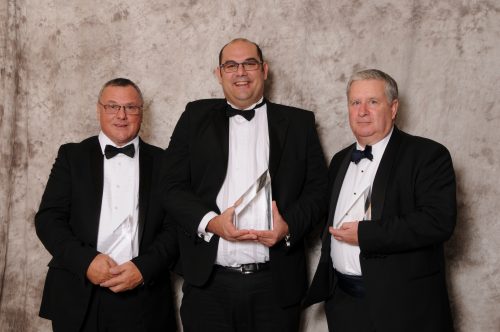 The accomplishments of Fugro drilling practitioners at different milestones in their career have been recognised at the British Drilling Association’s (BDA) annual awards.

The coveted Lifetime Achievement award was picked up by John Smith as he marks almost 50 years in the geotechnical industry, over 30 of those with Fugro.  Lead Driller of the Year was won by Lee Donachie who has made rapid progress since joining Fugro as a drilling assistant in 2011.

Fugro was also highly commended in the Safety Initiative/Improvement category for its Safety and Management approach to site investigations at the Moorside project (UK), notably completing the project without a single lost time incident.

John Smith was praised for his exemplary career, distinguished by a dogged commitment to quality practice in the face of any challenge, and being a motivational force in training standards and development of industry talent for the future.

The award panel highlighted his input to the BDA Accreditation initiative, aimed at raising training standards and recognition of drilling competence. Also singled out was his pivotal role in establishing and promoting technical competence and industry confidence in the use of high quality polymer flush Geobore coring, a technique in which Fugro heads the field.

Mr Smith joined Fugro in 1986 as a Field Operations Director. In his role as Drilling Manager since 2004, he has overseen all rotary drilling operations in the UK and specific projects overseas.

John Chaytor, a commercial manager in Fugro’s site characterisation team and long-time colleague, said: “John has continued to make an outstanding contribution to Fugro, in particular by driving up standards for the benefit of clients around the world and by encouraging ongoing training and development of our drilling staff.”

As well as enhancing the reputation of the UK drilling industry internationally, his technical ability and stature in the industry has influenced Fugro’s emergence as a “Centre of Excellence” for drilling in the worldwide arena.

Delighted with his Lead Driller award, Lee Donachie is one of many starting their careers with Fugro to benefit from Mr Smith’s expertise and mentoring. With personal development support and in-house training from the Fugro Academy, Mr Donachie has progressed exceptionally fast in developing the competence and site skills needed as a lead driller.

The BDA is a UK-based trade association for drilling companies, equipment manufacturers, and service suppliers to the geotechnical and ground investigation industry (excluding oil and gas). For over 40 years, it has been a leading light in improving standards in health and safety, quality of workmanship, and technical proficiency for the benefit of the geotechnical sector and its clients.