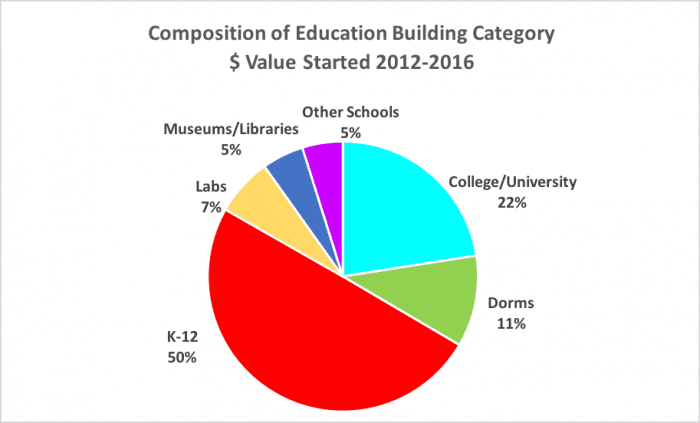 Sluggish Start to 2017
Despite the start of several major projects during the first half of 2017, education construction square footage begun fell 10% compared to the same period last year. Large projects do seem to have prospered: twenty-four projects valued at $100 million or more broke ground in the first half of the year. The largest education project was Harvard University’s $327.3 million John A. Paulson School of Engineering and Applied Sciences in Allston MA. Three other projects valued over $200 million also broke ground – the $288.8 million Seattle Children’s Research Institute: Building Cure in Seattle WA, Stanford University’s $252 million Chem-H Building in Palo Alto CA, and NYU’s $218 million Zipper Building in New York NY. In comparison, only 12 projects valued over $100 million broke ground in first-half 2016 and only one of those projects was valued over $200 million. Yet the overall market seems to have faltered: nearly 4,900 education projects got underway in the first six months of 2016 versus only 3,500 in first-half 2017.

Fortunately, the Dodge pipeline of upcoming education projects seems to hold promise since a number of large groundbreakings are slated for the second half of 2017 and should support upward momentum in education construction starts.

Top Five States Dominate Education Construction
A major issue in the lack of progress for education starts has been the unevenness of recovery across the nation. In fact, only a handful of states are driving the current recovery and even fewer are making robust new investments in school construction. In state rankings using five-year aggregates of square footage for education construction starts, Texas consistently topped the lists. Rounding out the top five states for consistently strong education construction were Georgia, California, Florida, and Ohio. From 2008–2016, these five states were responsible for 37% of total U.S. education square footage started. During the last downturn U.S. education construction starts declined an average of 16% each year. The recovery has been meager by comparison. Through the last complete year of the current recovery (2012–2016), education starts grew at an average annual rate of just 3%. Trends for the top five states have been more pronounced with a compound annual decline of 22% and a comparably stronger 9% annual recovery to date.

Without the top states, in fact, the recovery would have barely materialized. The top five states in aggregate accounted for 91% of the U.S. gain. Because they have been so important to the recovery in education construction, here’s a closer look at trends and what’s driving activity in the states with the largest amount of education starts:

Texas: The Lone Star State has been the clear leader in education construction. Texas groundbreakings peaked in 2008 at 39.6 msf and bottomed out in 2012 at 13.7 msf. Since then, the state has enjoyed the strongest recovery in education construction — largely due to its willingness to pass numerous bonds to support education building projects. In addition to the many local bonds passed over recent years, state voters in May 2017 passed over $3 billion in additional school construction bonds, and the state’s Senate recently approved another $100 million for the construction of public and charter schools.

California: Education construction in California has been on an uneven (but mostly downward) trend since 2003 despite the 2006 passage of Proposition 1D, a $10.4 billion bond initiative. That trend may now be turning around with a boost from the passage of a new $9 billion effort – Proposition 51 – in November 2016. It’s now expected that this new funding initiative will support a nascent rebound in construction. Early estimates suggest that $594 million in bonds will be issued in 2017–2018. Moreover, another $23 billion in local bonds also passed last November that should provide additional support for construction of California schools.

Florida: School construction starts in Florida peaked earlier than the nation in 2006, and then began a steep decline that ended in 2012. The recovery has been weak thus far, but the modestly upward trend is expected to hold. Governor Rick Scott recently approved issuance of $233 million in school construction bonds, and Senate President Joe Negron is expected to prioritize higher education construction.

Georgia: Education construction starts in Georgia peaked in 2007, and then continued to decline to a cyclical low in 2015. In fact, Georgia is the only one of the top five states to continue weakening over the 2012-2016 recovery. Over those four years, starts fell at an annual rate of 4%. The state’s FY2018 budget proposal will provide some support for education construction, but growth is likely to remain muted over the near term.

Ohio: Since sinking to a cyclical low in 2012, Ohio’s education building recovery has been tepid, despite significant need. In an effort to boost available funding, the Ohio Facilities Construction Commission approved $184 million in January for school construction. Local sources have provided an additional $127 million to expand school construction.

North Carolina: In 2016, North Carolina narrowly edged out Ohio for the fifth position in state rankings, and so the state merits a closer look at trends and drivers. In North Carolina, two associations recently requested that a $1.9 billion school construction bond be put on the 2018 statewide ballot to help fund an estimated $8 billion in needed school construction over the coming five years. As long as the economic recovery holds, odds look good for passage of this measure.

With many of the top states focused on increasing funding for education construction, the nation’s starts should see increased activity over the coming year. As the recovery further matures, more states are expected to join the effort, encouraging a bit more acceleration for construction of public schools and colleges.

Dodge Data & Analytics is North America’s leading provider of analytics and software-based workflow integration solutions for the construction industry. Building product manufacturers, architects, engineers, contractors, and service providers leverage Dodge to identify and pursue unseen growth opportunities and execute on those opportunities for enhanced business performance. Whether it’s on a local, regional or national level, Dodge makes the hidden obvious, empowering its clients to better understand their markets, uncover key relationships, size growth opportunities, and pursue those opportunities with success. The company’s construction project information is the most comprehensive and verified in the industry. Dodge is leveraging its 100-year-old legacy of continuous innovation to help the industry meet the building challenges of the future. To learn more, visit www.construction.com.