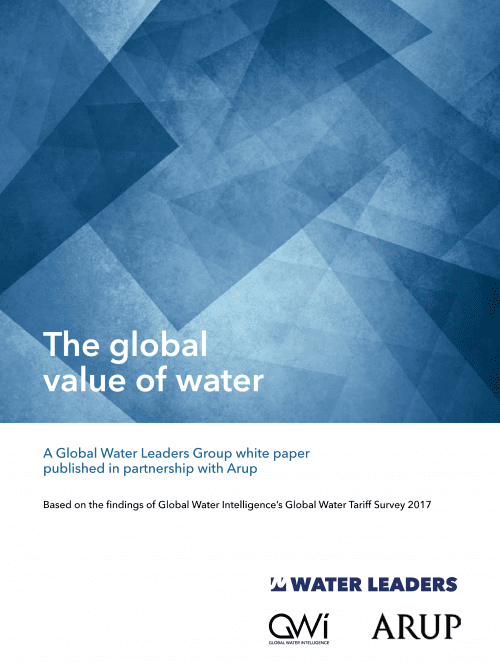 The results of the 2017 Global Water Tariff Survey’s Affordability Index, published last month by Global Water Intelligence (GWI) and the Global Water Leaders Group (GWLG), have revealed that Mexico City residents spend around 3.71% of their household income on water bills, well above the 3% affordability threshold advised by the UNDP.

The results are based on data collected for the 2017 Global Water Tariff Survey, and were released in a new White Paper entitled The Global Value of Water, published by GWI and the Global Water Leaders Group (GWLG) in partnership with Arup. The White Paper features commentaries from GWLG members and Alexander Danilenko, Senior Water and Sanitation Specialist at The World Bank.

The Index examined the affordability of water tariffs across 20 major capital cities from around the world, and which components among household income, water consumption and water price, are responsible for it. The ‘Affordability Index’ is measured as the percentage of household income that goes towards paying the water bill.

The Index found that cities where water tariffs are less affordable have, on average, larger levels of water consumption per capita, and lower average household incomes than more affordable cities. Water consumption levels in Mexico City are currently at more than 300 litres per capita per day.

A reduction in water consumption to 15 m3 a month for example, would decrease the percentage of household income than an average Mexican household would spend of their water bill to 0.91%, well below the 3% UNDP affordability threshold.

Ankara, Warsaw and Beijing were also found to be some of the least affordable cities in the Index, with the pressure on affordability in these locations also driven by high average water consumption in contrast to a low household income.

The Index found that water consumption in the top four cities averages out at 22 m3/month, well above the average of 15 m3/month found across all the Index cities. Meanwhile average household income rests at $13,700, in contrast with $61,000 among the most affordable cities.

The Index results also showed that residents in cities such as Paris can easily accommodate an increase in tariffs because of the high household incomes, while lower incomes in Lisbon, Madrid and Rome mean residents have less room for tariff growth.

High average household incomes in Washington D.C also kept spending on water bills below the 3% affordability threshold, despite high levels of water consumption by residents in the US capital recorded by the Index.

Meanwhile, Copenhagen’s high water tariffs are affordable because water consumption per capita is so low – the government is expecting to reach consumption levels of 100 litres per capita per day in 2017.

The Global Value of Water and The Global Water Tariff Survey are available as part of a subscription to GWI Magazine, visit www.globalwaterintel.com/gwi/tariffsurvey