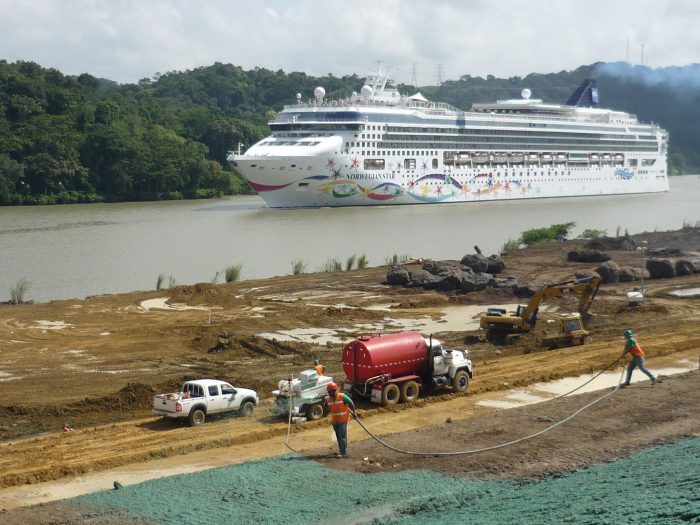 In a country that receives more than 100 inches of rain per year, on slopes as steep as 45 degrees, controlling soil erosion is crucial. In 2006, when the $5.7 billion Panama Canal expansion project kicked off, headlines were awash with news about the engineering feats required to expand one of the world’s busiest shipping lanes.

What received much less attention—but just as critical to the project’s success—was the stabilization of the banks along the nearly 50-mile-long canal. After seeding and erosion control blankets failed to prevent massive rutting and erosion, the Panama Canal Authority (Autoridad de Canal de Panama; ACP) turned to a hydroseeding solution from Profile Products. The results were dramatic and sparked a nationwide interest in the technology.

More than 100 years after opening, the Panama Canal is still a world-renowned engineering feat and one of the “Seven Marvels of the Modern World.” Looking to shave 8,000 miles and months of travel time to ship items from the east and west coasts of the United States, politicians and businessmen on both sides of the Atlantic envisioned a canal through the narrow land mass connecting North and South America.

The first attempt to make this vision a reality began in 1881 by the French in the Colombian province of Panama. After excavating 78 million cubic yards of soil—losing 20,000 lives to malaria, yellow fever and other tropical diseases as well as spending more than $240 million—France abandoned the project.

In 1902, the United States negotiated a treaty with Colombia to build the canal through Panama. Although the treaty was signed by U.S. Secretary of State John Hay and the Colombian Foreign Minister Tomás Herrán, it ultimately was rejected by the Colombian congress. This prompted Panama’s bid for independence from Colombia in 1903, with the backing of the U.S. military. 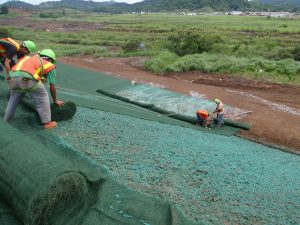 Shortly thereafter, the United States negotiated with the newly independent Panama government the Hay-Bunau-Varilla Treaty, creating the Panama Canal Zone. In 1903, under the terms of the treaty, the United States was provided with a 10-mile-wide, 50-mile-long strip of land for the canal, and Panama received a one-time payment of $10 million and an annual payment of $250,000.

In 1914, the Panama Canal opened to commercial shipping. It took 40,000 laborers from 50 countries working 10 hours per day, 6 days a week for 12 years to excavate more than 268 million cubic yards of material. At its peak capacity prior to the modern expansion project, the largest vessel the canal could accommodate was a Panamax ship, measuring 965-feet long by 106-feet wide, with a maximum cargo capacity of about 4,400 TEUs (a “20-foot equivalent unit,” which is the volume of a standard 20-foot shipping container.) In December 1999, control of the Panama Canal transferred from the United States to the Panama Canal Authority (Autoridad de Canal de Panama; ACP). For nearly 100 years, the canal was able to meet global shipping demands, but the global economy of the 21st century demanded greater capacity. 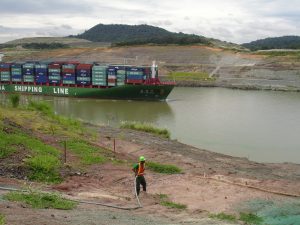 A laborer works the banks as a container ship moves through

Work began on the Panama Canal expansion project in 2007, with the goal of increasing the size of the canal’s locks to accommodate massive “neo-Panamax” ships, which are 1,200-feet long by 160-feet wide and can carry nearly 14,000 TEUs, more than three times the capacity of a Panamax ship. (Even with the upgrades, the Panama Canal still is not capable of passing the world’s largest shipping vessels, such as the Maersk’s Triple E class ships which are 1,312-feet long by 194-feet wide with a capacity of 18,000 TEUs.)

To accommodate the larger ships, two new locks were built, one at each end of the canal. As the ground was cut and blasted to form the new channel and channel banks, controlling erosion of the bare earth and maintaining proper functionality of the new canal was a top priority.

When raindrops fall on freshly graded soil or soil lacking vegetation, the force of the drops dislodge soil particles, washing them downslope and depositing them at the naturally occurring or man-made low points. Where these low points are streams, rivers or man-made canals and channels, some of the washed-out soil continues its journey downstream and some settles to the bottom of the channel. This sediment can negatively impact natural habitats and degrade the functionality of the stream or canal.

Back on the slope, the loss of topsoil results in an inability for new vegetation to grow, resulting in more soil washout, more sediment flowing to the canal and further functional degradation. Uniform, smooth, freshly graded slopes such as those on the sides of the newly constructed canal are even more susceptible to the effects of such erosion.

Due to negative natural and economic impacts of soil erosion and sedimentation, farmers, engineers and others who worked the land through the centuries developed a variety of methods to prevent soil erosion, including manually planting vegetation, building stepped terraces, and applying erosion control blankets and seeds. 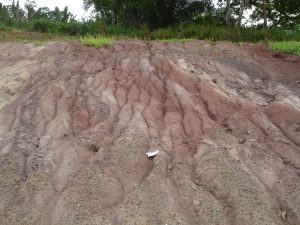 A test area was heavily rutted and had no vegetation.

On the Atlantic side of the Panama canal, the average annual rainfall is 130 inches, while the Pacific side averages 70 inches. All this water is delivered in torrential downpours that power-wash the country on a near-daily basis.

To prevent erosion and deposition of sediment in the new canal as well as the multi-million-dollar price tag associated with dredging, the canal design team specified hydroseeding and turf-reinforced mats (TRM) for slope stabilization. First, a seed mixture is sprayed on the bare soil, and then the TRM is laid atop the seed and mechanically affixed to the ground. This labor-intensive method was used for the first two phases of the five phases of construction.

Almost immediately, the design and construction team and ACP realized they had a problem with erosion. As they degrade, TRMs generate heat, which can burn the seeds below, resulting in lower germination rates and less vegetation growth. On uneven surfaces, water can work its way under the TRM, causing small channels and ruts. Seeds that manage to germinate in these ruts are on soil that can be several inches below the TRM and thus never grow through the TRM to reach the sunlight and ultimately die. With little plant growth and ongoing rutting, the banks beneath the TRMs erode, washing into the canal. After spending $5 billion digging a canal, the developers didn’t want mother nature filling it back in. When the methods chosen to stop erosion didn’t work, a new solution was needed.

Although hydroseeding used in conjunction with a TRM is common and has many practical applications, it’s not appropriate in many situations, and an alternative is needed. Through the years, a variety of spreadable alternatives have been used with varying degrees of success. At one time, seed was mixed with water, sprayed on the soil and then covered in straw. In subsequent iterations of this technique, straw was replaced with shredded paper and eventually wood fiber. ACP previously allowed the use of one of these alternatives and had terrible results, which resulted in stringent guidelines for acceptable erosion control methods, and these guidelines called for hydroseeding plus TRM. 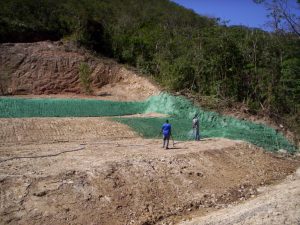 Hydroblanket (dark green) was applied to the test area

In many parts of the world, another popular TRM alternative is a “hydroblanket.” Rather than using a seed and water mixture with a biodegradable cover, engineers developed a sprayable hydroblanket, an engineered slurry of mechanically separated natural wood fibers thermally refined to make them long and curled as well as biodegradable manmade fibers. Added to this is a biodegradable chemical “tackifier,” which is a type of glue designed to bond to the fibers and the soil on which it’s sprayed.

With the seed mixture added to the slurry, the entire product can be applied in a single spray-on application, making installation much easier and less labor intensive. The process starts by creating the blanket mixture in a tank. The slurry then is sprayed on soil to which it bonds instantly. Under normal conditions, no surface preparation is needed because the slurry conforms to and bonds with irregular surfaces. 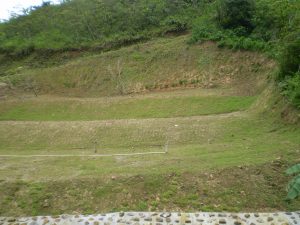 Within a month, appreciable amounts of vegetation growth were obvious.

Ideally, if erosion has already occurred, the surface should be smoothed to remove large ruts. This erosion control technique is very popular in the United States, Canada and many other parts of the world, with thousands of contractors using it on hundreds of thousands of projects.

In Panama, this technique wasn’t popular, as previous projects had terrible failures with earlier forms of hydroseeding and TRM alternatives such as paper or wood mulch. Because of this, ACP’s stringent set of guidelines specify the standard for slope stabilization and erosion control as hydroseeding plus TRM.

Due to the failure of hydroseeding plus TRM on phases one and two of the project, the erosion control consultant, Grasstech, believed hydroseeding with “Flexterra,” an engineered hydroblanket solution from Profile Products, would be well-suited for conditions in Panama. It had already been used successfully in thousands of applications in other parts of the world, but convincing ACP of its effectiveness, or to even let the team try it, wasn’t easy.

Starting in 2008, a months-long lobbying process began with conversations and presentations to introduce the hydroblanket technique to ACP. After several months of presentations, providing referral projects and meeting other ACP requirements, Greentech and Profile Products were given a test area consisting of 5,400 square feet of badly eroded and scarred slopes along a section of the earlier phases.

Slopes in the test area had been exposed to harsh rains for several months, with little to no vegetation or erosion control measures. After the better part of a year, the Grasstech and Profile Products team had one chance to prove the effectiveness of the technique and product. If Flexterra could succeed on these slopes, under these conditions, it likely would work everywhere along the canal.

With no advance surface preparation, and under the skeptical watch of the ACP, the team applied Flexterra. Within a few days, grass began to germinate; within a month, the slope was appreciably covered in growth. Further, the slope showed little to no sign of soil erosion. The test was a success, and ACP revised the project specifications to approve the use of Flexterra for phases three through five.

Throughout the eight-year construction of the remaining phases, from 2008 to the canal’s opening in 2016, Flexterra was used on nearly 3.3 million square feet of exposed slope, resulting in savings of $1 million in labor and materials.

Mark Scacco, P.E., has been an AEC industry consultant since 2001. He is the president of Scacco LLC and can be reached at mark.scacco@scaccollc.com.