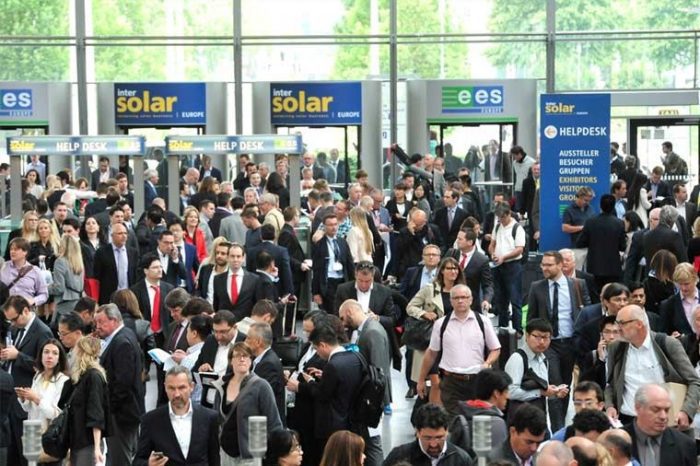 The renewable energy revolution is here and it has been here for some time. An infographic from Bloomberg New Energy Finance summarizes the past 10 years in a nice and concise way. For the most part it is graphs pointing up and to the right.

Greenbyte, the company behind renewable energy management software Breeze and Bright, participated at this years’ Intersolar in Munich to market its product offering. Being at Intersolar, Jonas Corné, CEO and founder of Greenbyte, made some interesting observations shared in this article.

No dominant players, a lot of small companies

In most other energy industries, there are large incumbents protected by heavy moats due to the highly capital intensive nature (and regulation) of energy production. Think oil, nuclear and coal.

Solar is distributed and not capital intensive while being subject to less regulation. It is open for almost anyone to play. This can clearly be observed by looking at what companies are exhibiting at Intersolar and what they are communicating. All the usual suspects in heavy industry are there – the Siemens, ABBs, and so on. Most of them communicate fluffy visions of the future. Then there are the small technology and service companies with very specific products and services, such as micro inverters and machinery for cleaning solar arrays. And much like in the wind industry where turbine manufacturers dominate the landscape of an exhibition hall, the exhibition halls in solar are dominated by the inverter and module manufacturers.

A new industry is being created and it is still unclear who will be winners and who will be losers.

Energy storage is about to go big

About two years ago we all witnessed the Tesla Powerwall be unveiled and finally understood that Tesla was not a car company. The launch of Powerwall has spurred seemingly every company at Intersolar to have their own battery in a sexy packaging on a wall. This puts a pressure on technologists who may have been toiling away at making batteries for many years and suddenly comes a company great at marketing such as Tesla and pushes the idea into the main stream.

In fact, batteries were so prominent at Intersolar that walking through the exhibition halls one might have thought it was a battery exhibition and not a solar exhibition.

In a recent McKinsey report, the management consultancy says:

“Cheap solar is already proving a challenge to business as usual for utilities in some markets. But cheap storage will be even more disruptive because different combinations of storage and solar will likely be able to arbitrage any variable rate design that utilities create.”

The combination of solar and storage will enable consumers of electricity to defect from the grid which of course creates a great challenge for owners of grid assets.

System integration, no one really knows what will happen

In such a historically stable market as the energy market it is refreshing to see that things can change. The fundamentals for solar are here and it will have big implications.

Given that solar is open for everyone to play, electricity from solar is unbundling the energy market. There are new owners of assets and there is a new technology and service value chain being established.

At the same time, there is a lot of speculation in what the energy system of the future will look like. But, as is true of any real revolution where it is the grass roots movement calling the shots it is difficult to predict. At Greenbyte we don’t pretend to know either but we have a strong hypothesis, which is that data will play an integral role in the transformation to something new.

Nowadays, people connected to social media have most likely witnessed their news feeds exploding with headlines such as ‘Corporate Clean Energy: Not Just for Google Anymore’, ‘Big Oil needs to spend $350 billion…. on wind and solar’ and ‘Global Wind Day Photo competition – and the winner for ‘Wind at Sea’ is…’ but even though the fundamentals are here and technology is emerging there is still a strong need for political support. This means that people not in the business also need to be enlightened to the potential of renewable energy. One of the more interesting initiatives in recent years is the Green Tea Party. They do not frame renewable energy as imperative to counteract climate change, which a surprising number of Americans still seem to be in denial of. Instead they frame renewable energy as a form of freedom and independence. Freedom to choose and independence of foreign countries.

The renewable energy revolution is a grass roots revolution becoming main stream. There will be winners and losers. It is Schumpeter’s idea of creative destruction at work. Exciting and bright times ahead.