Drone equipped with thermal camera is the best choice for solar panel field inspection, as in most cases it saves costs compared to manned aviation and saves time compared to visual control with handheld IR camera.

Semi-professional drones with changeable cameras like DJI Inspire can also be used, but this will require double amount of time – to enable survey flight first with daylight camera and then repeat the flight after changing to IR. To minimise time required for inspection usually both sensors (cameras) are used simultaneously requiring a drone with enough lift-off capability.

The two major defects visible with IR camera are connection issues and physical damage.
Connection issues – such as when a panel or a string of panels are not connected to the system – power being produced from the panel(s) cannot flow through the system and on to the grid so that power is converted to heat and the entire panel(s) will heat up slightly.

For example (see Figure 1) the panel marked Bx7 presents little bit higher average temperature comparing to other panels and should be checked for both – defects and connection issues.

Where there is physical damage to the underlying panel – it causes small areas of more extreme heating as power flows around and backs up behind the damaged area. Such defects can be visible on sample – bright point in rectangle marked Bx3 with maximum temperature 169.4 F (76.3 C). Also physical damages are visible in other zones.

Both kind of defects usually are clearly visible on images in IR spectrum what makes defects localisation relatively easy even on stitched orthophoto. 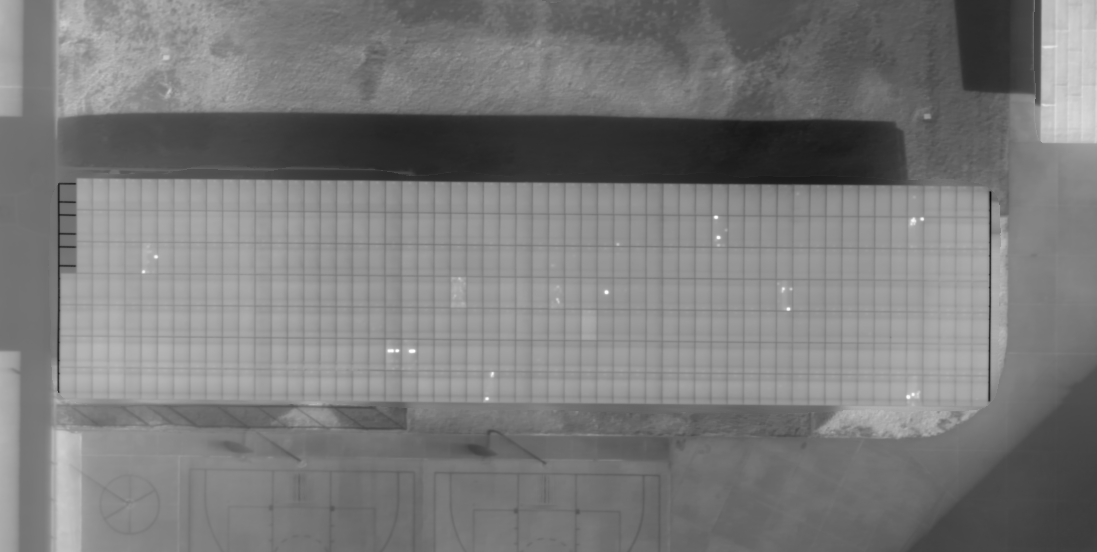 In visible spectrum (using daylight camera) usually only debris on panels can be detected. It helps to determine if the hotspot is the actual panel heating up or if it is the debris (dirt, bird droppings, etc) heating up. 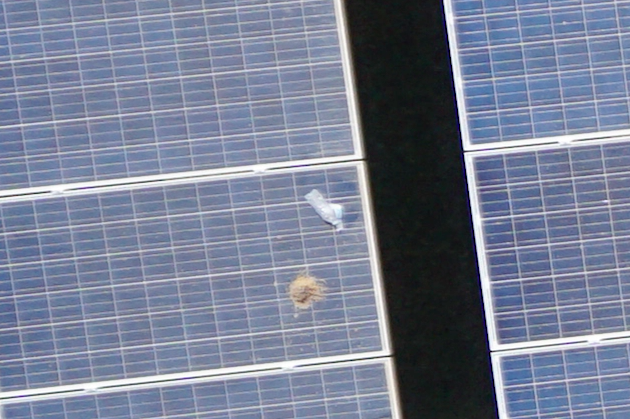 Figure 3: Photo of PV solar panel taken with daylight camera with visible debris on the panel.

Glass breaks are usually not detectable unless drone will fly very low as the cracks are small. Only in case of severe damage situations glass breaks will be visible on photos. 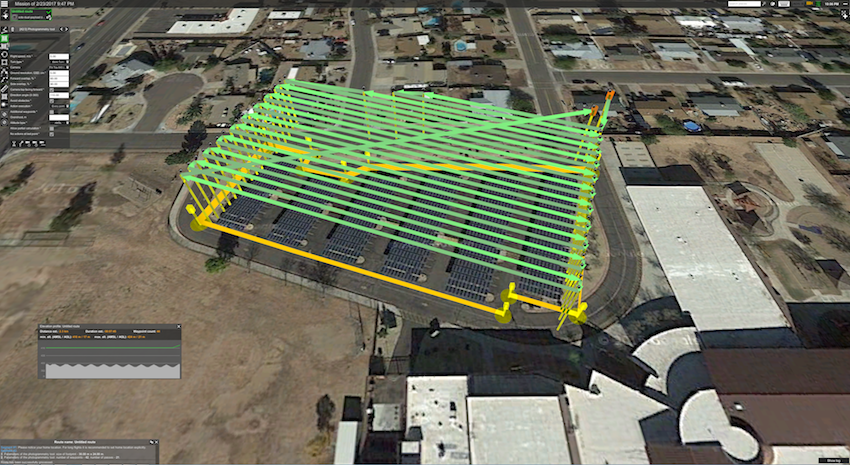 For photogrammetry mission ground sampling distance (GSD) is defined by client and it is the main characteristic of survey’s output data.

In case of solar panel inspection client has to define which defects have to be detected. To detect panels with connection issues GSD for IR images should be set 25 cm. To detect physical damage or hotspots smaller than whole panel the GSD should be set from 5-16 cm.

For survey missions when drone carries IR and daylight cameras simultaneously the GSD for daylight camera isn’t relevant as it will produce pictures with much better GSD than IR sensor because of low resolution of thermal cameras. For example, an optical camera with a 16 mm lens to match the 7.5 mm FLIR lens will produce images with 1.3GSD while the FLIR images are at 15.7GSD.

For solar panel survey missions when a drone with changeable cameras will be used set GSD > 2 cm – this will enable to detect even small debris on panels but will not produce thousands of images from flight.

Mostly camera will be set to nadir position. In situation where tracker system can’t be positioned at a set angle or for some fixed array sites – based on the time of the day and sun position oblique setup can be used.

Optimal angle of solar panels for thermal images is from 5 to 30 degrees to avoid reflection and inaccurate temperatures. If such images can’t be acquired with nadir camera position, the camera angle has to be adjusted to ensure pictures of panels in range from 5 to 30 degree angle. 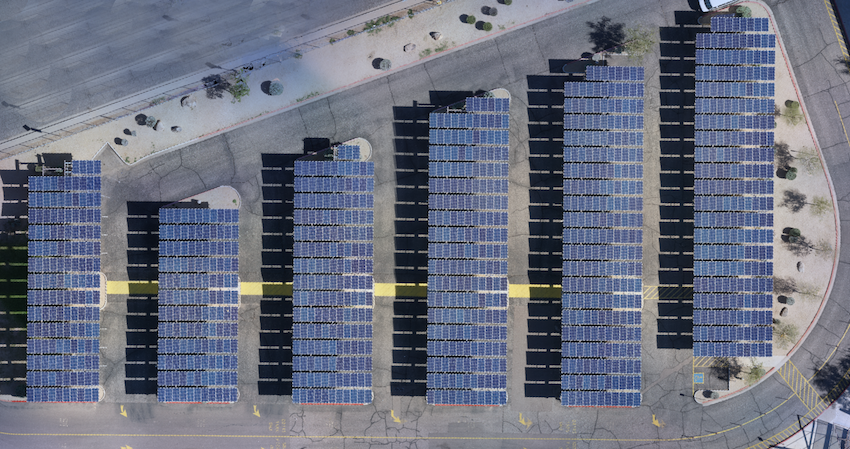 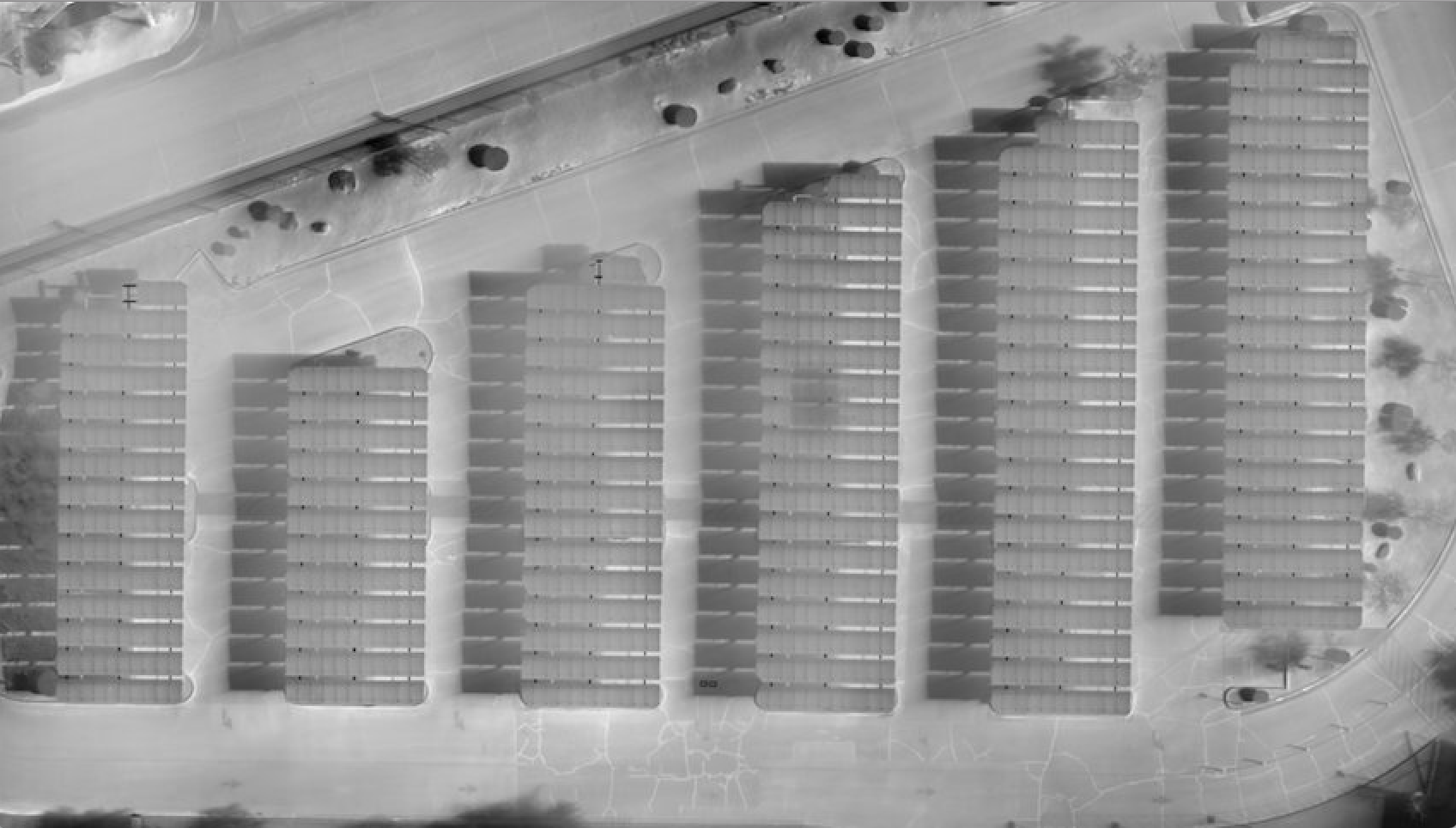 Orthophoto maps of relatively small solar panel fields can be analysed manually with different zoom level. To enable rapid evaluation for large fields with millions of panels automated defect detection should be used. Defected panels are marked and further inspections can be accomplished manually.

Without doubt the usage of UAV for area surveying or infrastructure inspection is time and cost saving. Drone mission planning features and tools of UgCS enable UAV professionals to customise each mission according to application requirements.