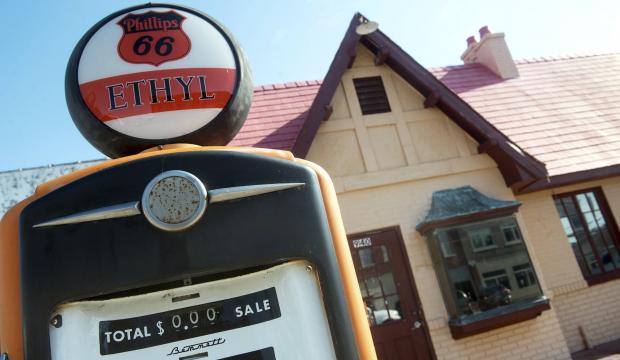 BAXTER SPRINGS, Kan. (AP) — One of Baxter Springs’ most iconic stops on its most iconic highway owes a lot to a federal program that could soon reach the end of its road.

Likewise for historic sites in Carthage and elsewhere along Route 66, which linked the Midwest to the West Coast, The Joplin Globe (http://bit.ly/2ruGWz5 ) reported.

The Independent Oil and Gas Station in Baxter Springs and Boots Motel in Carthage, Missouri, are just two of more than 150 projects that have received funding via the Route 66 Corridor Preservation Program, which has played a key role protecting, preserving and promoting sites along the 2,500-mile route that John Steinbeck called The Mother Road.

The federal program was established by Congress in 1999, is overseen by the National Park Service and offers cost-share grants and technical assistance. It was intended to last only 10 years but was extended for another decade in 2009 because of public interest in the program. Under the current administration, it is set to expire in 2019.

“Unless there’s legislative action taken to extend it, we are expecting it to sunset on Oct. 1, 2019,” said Kaisa Barthuli, program manager with the National Park Service for the Route 66 Corridor Preservation Program.

Since its inception, the program has provided about $2.1 million in grants and has been matched by an additional $3.4 million in private investment, Barthuli said. Other grants were used to repair the roof of the Historic Navajo County Courthouse in Holbrook, Arizona, for example, and a free-standing neon sign for Donut Drive-In in St. Louis, Missouri.

The program is credited with helping bring back to life forgotten landmarks along the route, many in disrepair because of lower traffic volume after Route 66 was decommissioned in 1985.

Preservationists fear that small towns along the highway will miss out on much-needed investment if the funding program is not extended, or if the route does not get federal historic trail designation, said Frank Butterfield, director of the nonprofit group Landmarks Illinois.

“Route 66 runs through a lot of very small towns where there is not a lot of economic development,” Butterfield said. “It has been quite impactful, so it would be a great loss to the town where Route 66 passes.”

“There were quite a lot of small-business owners or historic property owners that received some of those matching funds and were able to accomplish some much-needed projects at their properties,” he said. “Several projects within the city of Tulsa and their Vision 2025 project received some funding. They’ve also helped with research into historic properties and what to do to rehabilitate it. All across the state of Oklahoma, there have been properties that did receive some kind of funding.”

Mary Billington, Baxter Springs Heritage Center and Museum director, said she has seen the positive impact that the Route 66 Corridor Preservation Program has made in the region.

“They have definitely played a role with Route 66 in this area, for the simple fact that, even if they didn’t have funding or with a grant specifically, they could always point you in the right direction to find that grant or funding,” Billington said.

The station was placed on the National Register of Historic Places in 2003. Two years later, the Baxter Springs Historical Society bought the station at 940 Military Ave. The building was restored to its 1940s appearance in 2007 and now houses the Kansas Route 66 Visitors’ Center.

Beth Auman recounted the assistance they received not only from the money but also the technical expertise. Beth is the wife of Dean Auman, who served as president of the Museum Board at the time. The Baxter Springs Historical Society and the Museum Board work hand in hand to preserve the region’s history.

“For some of us who can’t afford to fix our businesses, get advertisements or make brochures for our businesses, the Route 66 Corridor helped with those situations, too,” she added. “It did a lot and the National Park Service was a big help in all of that.”

The loss of the grants also could be felt in Carthage.

With her sights set on winning the Boots Court Motel a place on the National Register of Historic Places, co-owner Deborah Harvey used the grant program to remove a tacked-on gabled roof that would have hurt her chances of receiving the designation. In 2015, Harvey received another grant to refurbish neon lighting that traces the outline of the structure, returning the structure to its 1940s appearance.

Without the combined $32,656 in grants for the two projects, “it would have been very difficult,” Harvey said.

And after a deteriorating foundation threatened the Best Budget Inn, also known as the Lake Shore Motel, the owners were granted $30,000 to repair it in 2015.

Business owners along Route 66 cherish the program, which they say boosts its appeal with tourists.

“It already expired once, and everybody worked very hard to get it approved again,” said Glenda Pike, who founded the Route 66 Association of Missouri along with her husband, the current president.

Pike hopes Congress will compensate for the expiring grant program by naming Route 66 a National Historic Trail. A bill sponsored by U.S. Rep. Darin LaHood, an Illinois Republican, to create the designation, has support from a bipartisan group of 12 other members of Congress from Illinois, Kansas, Oklahoma and California.

As a Historic Trail, Route 66 would receive funding from the National Park Service for signage and online guide resources that could continue to support tourism, though not for physical improvements to businesses.

Supporters of the bill and the grant program say Route 66 brings tourism to states in the middle of the country. Much of Carthage’s tourist traffic comes from the highway, according to Wendi Douglas, director of the Carthage Convention and Visitors Bureau, who referenced a survey of tourists conducted by her organization.

“It seems that a great deal of our traffic does come from Route 66,” she said. “A lot of people are here visiting Route 66, and they’re visiting and staying the night.”

Barthuli said a study was conducted by the National Park Service in the 1990s to evaluate the significance of Route 66 and potential options for federal support. Designation as a National Historic Trail was considered then.

“At the time, while Route 66 was determined eligible to be designated as a National Historic Trail, the interest from the public was in this program — financial and technical assistance,” Barthuli said. “That was nearly 20 years ago. At this point in time, it’s our understanding that public interest is in looking at a more permanent National Park Service form of involvement, and that there’s interest in designating it permanently as a National Historic Trail. This would provide Park Service involvement in perpetuity.”

An AP Member Exchange shared by The Joplin Globe.