Penguin Perfect: Providing a Picturesque ‘Penguins Plus’ Path and Pavilion 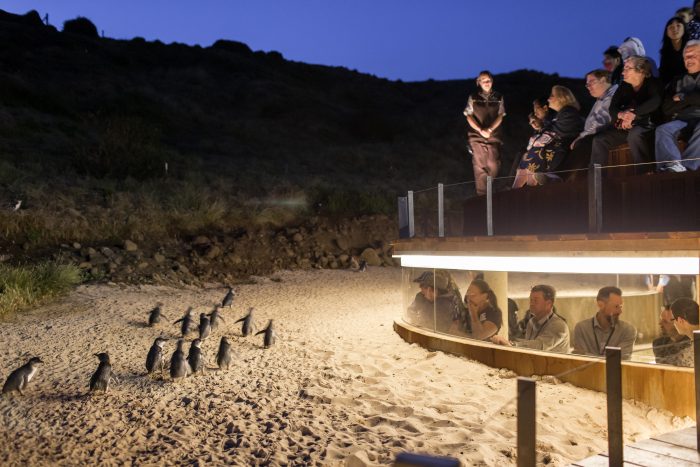 Consultants employ the latest in design technology to create a non-invasive world-class viewing area and walking path for the Penguins Plus View Experience at Phillip Island Nature Parks in Victoria, Australia. Phillip Island is located in the southeast corner of Australia.

Every evening at sunset on the coastal beaches about an hour and a half’s drive south of Melbourne, Australia, something magical happens. Located on the southeastern tip of Australia on the Summerland Peninsula, Phillip Island Nature Parks is home to more than 32,000 Little Penguins. As the name implies, Little Penguins are the smallest of all penguin breeds, weighing just more than 2 pounds and standing slightly taller than 12 inches. Little Penguins spend more than 80 percent of their time at sea, foraging for food and swimming. It’s not until the sun sets that they return to their burrows to rest, breed and raise chicks. It’s this return from the sea, this magical “parade of penguins,” that attracts more than 600,000 annual visitors.

Opened in 1996, Phillip Island Nature Parks was created by the State of Victoria government and is a not-for-profit ecotourist attraction. In addition to the most-popular Penguin Parade exhibit, the parks host several other attractions on the 4,460-acre nature preserve. The profits generated from the park attractions are reinvested into a variety of activities and initiatives within the Nature Parks, including conservation and research. This success and popularity also brings with it challenges of balancing the preservation of the natural wildlife habitats with providing responsible and enjoyable access by the public.

In 2012, the parks reached out to landscape architecture firm Tract Consultants to develop a master plan to redevelop the Summerland Peninsula on which the Nature Parks are located. The master plan was based on the philosophy that the facilities should blend seamlessly into the natural features of the surrounding landscape, providing a varied and multifaceted ecotourism experience while protecting the natural resources and wildlife.

Conceptual designs for the penguin path were created early in the process.

In June 2015, the parks, in partnership with the Royal Automobile Club of Victoria (RACV), embarked on an ambitious project to renovate the penguin exhibit facilities. The $2.25 million project, Penguins Plus Viewing Area, is the first major facility renovation to be completed under a new design and master-planning philosophy. The parks turned again to Tract Consultants to help bring the project to life.

Using OpenRoads, the team performed a variety of analysis tasks on the proposed design.

Headquartered in Melbourne and with additional offices in Sydney, Brisbane, Adelaide and Geelong, Tract Consultants is a national design practice specializing in landscape architecture, urban design, town planning and associated digital media. Tract Consultants is owned and operated by its senior practitioners and has a staff of more than 150 people. As planners and designers, Tract Consultants’ charter is to “positively impact the social through molding the physical.”

The design constraints and requirements of the new facility presented many challenges to the team at Tract Consultants. To preserve and (where possible) enhance the natural habitat, the viewing areas had to blend seamlessly and unobtrusively into the surrounding landscape. Changes in elevation above or below existing ground elevations were restricted to a maximum deviation of 6 inches. Further, the site had to accommodate an average of 1,600 visitors per day and adhere to DDA (similar to the U.S. ADA) accessibility requirements. And, of course, design of the new facility had to meet the primary goal of providing close, unobstructed views of the parading penguins. To meet these challenges, the team at Tract Consultants turned to powerful design and visualization tools from Bentley Systems.

The team’s first task was to layout possible routes for the new path along the existing terrain. Working from an existing ground-surface model, Will Dodgin, a Tract Consultants associate located in Melbourne, and his team traced out possible routes in vertical and horizontal planes. Using the built-in rules-checking functions of OpenRoads, Dodgin and the team would be instantly alerted to any violations to the maximum or minimum slope requirements. This allowed the team to quickly iterate through a variety of options to arrive at the desired layout. Although only charged with completing the conceptual design for the new facility, using Power InRoads with OpenRoads technology, Tract was able to go well beyond conceptual design and started looking at the details of the final design much earlier in the process than was previously possible. An iterative design led to this final path solution.

Further, using OpenRoads, the team at Tract Consultants linked the design components to the cost estimates. This allowed them to see in real time how changes to the design would impact the budget. “Costs would automatically update as we modified the model,” says Dodgin.

“Typically, for projects like this, the 3D modeling is done near the end of the process, after the final design is done,” says Dodgin. However, the Tract Consultants team was able to “flip the design process on its head. Optioneering with OpenRoads allowed us to bring the 3D modeling forward in the process.”

The 3D models allowed them to analyze not only the slopes, but also the views from various viewpoints. In fact, visualization was used heavily during the design process and had a “huge impact” on the final design. “We used the dynamic visualization capability of OpenRoads during our design meetings to see if there were problems. We also used them in meetings with owners and other stakeholders. We could make changes on the fly, and easily convey the pros and cons of various decisions.” A photo shows the completed section of the viewing areas.

Trust Had to Be Gained

Penguin Parade Plus was the first Tract Consultants project to use OpenRoads. As such, the users anticipated a steep learning curve and were pleasantly surprised when that hurdle never materialized. “This was the first time we used OpenRoads on a real project,” notes Dodgin. “We had played with it a bit, but never really put it to the test on a live project.”

There was some hesitance from the team to use the new technology. “A lot of landscape architecture design is at the bottom of the food chain in terms of technology adoption, so trust [in the software] had to be earned, and it was,” says Dodgin. Due to the positive results of this project, the Tract Consultants design team has much more confidence in moving forward with using OpenRoads on future projects. “We only used a subset of the product’s features, and it was fantastic,” adds Dodgin. “OpenRoads makes everything so simple. Compared to how we did things 15 years so, this is amazingly simple.” Visitors get up close to watch the Penguin Parade.

The project, delivered in collaboration with Woods Marsh Architects, opened to the public in November 2015 and has been very popular with both the tourists and penguins. As they have for generations, the penguins still make their evening waddling parade from the sea to their burrows, but now under the eager gaze of a fascinated public viewing from the remarkable vantage points afforded by the renovated exhibit.

Comments are disabled
NEXT ARTICLE
Change Leaders Interview: Technology Is Changing Construction More Than Ever Before
June 8, 2017
PREVIOUS ARTICLE
From the Editor: Variety and the Growth of Community
June 8, 2017