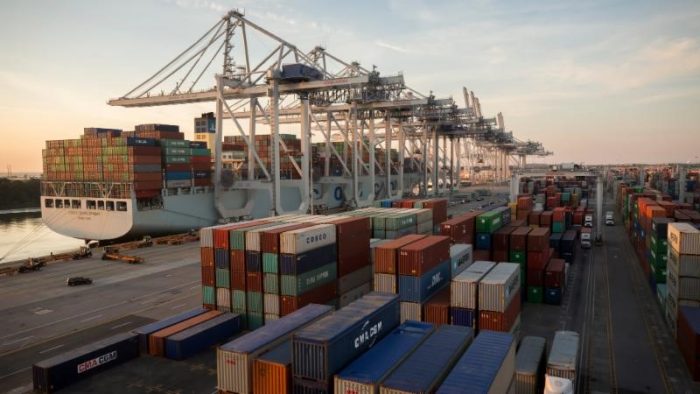 Savannah, Ga.  – The Georgia Ports Authority handled 333,006 twenty-foot equivalent container units (TEUs) in April, an increase of 11.7 percent, or 34,966 TEUs, compared to the same month a year ago. Across all ports, GPA’s total tonnage increased by 13 percent, or 334,950 tons, to reach 2.94 million tons and the Authority’s busiest April ever.

“Savannah has established itself as a premier gateway serving the Eastern United States,” said Griff Lynch, GPA’s executive director. “Our team is not only keeping pace with record volumes, but has managed to set new industry standards in cargo velocity, berth productivity and congestion free gates.”

Lynch cited the recent visit of the COSCO Development, the first 13,000-TEU vessel to call the U.S. East Coast, as an example. During the 30 hours the vessel was in dock, six cranes moved more than 9,700 TEUs on and off the vessel, with a net berth productivity of 220 boxes per hour.

Last month’s performance continues a surge of growth for the GPA across the first four months of the calendar year, with TEUs increasing to 1.3 million, up 10.2 percent (121,258 TEUs) compared to the same period in 2016.

“Our goal at Georgia’s ports has been to stay one step ahead of demand in the marketplace,” said GPA Board Chairman Jimmy Allgood. “As a result of this approach, we can accommodate more and more vessels like the COSCO Development without delays.”

Lynch said the scale and scope of Garden City Terminal is perfectly suited for the massive exchanges coming on and off Neo-Panamax vessels. “As the size of vessels grows, so does the need for larger terminals with significant assets to handle increased volumes. At 1,200 acres, handling nearly 10,000 truck moves per day and 38 trains per week, Savannah is perfectly positioned to fill this need,” Lynch said.

Measured in containers, total refrigerated cargo – a sector that includes export poultry, peanuts, pecans and blueberries among other farm produce – grew by 8.2 percent in April. For the calendar year to date, refrigerated cargo is up by 11.6 percent, 2,466 additional containers through April, for a total of 23,661 containers.

Auto and machinery units via Savannah and Brunswick were up 3.5 percent (7,406) to reach 217,729 units during the first four months of the year.

In other business, the GPA Board on Monday approved the purchase of three new electric rubber-tired gantry cranes for use at the Appalachian Regional Port (ARP) in Chatsworth, Ga. The e-RTGs virtually eliminate diesel usage, run quieter and require less maintenance than diesel-powered RTGs. The ARP, an inland port to be operated by the GPA, will open additional markets across Alabama, Tennessee and Kentucky while converting tens of thousands of containers from truck to rail. The ARP is projected to begin operation in 2018.