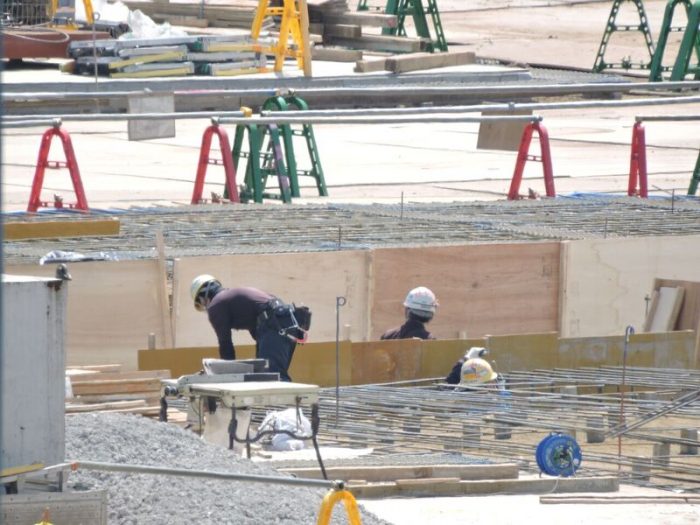 Citing a significant breach of the commitment to a sustainable 2020 Olympics, Japanese and international environmental groups today called for an urgent independent investigation of the use of tropical formwork plywood that appears to originate from the notorious Malaysian logging company, Shin Yang, in the construction of the new National Olympic Stadium in Tokyo.

The International Olympic Committee (IOC) and the Tokyo Olympic organizers have been repeatedly informed about the high risk of using illegal and unsustainable timber for Olympic construction.[1] In December of last year, just days before construction started on the new Olympic Stadium, over 40 environment groups delivered a letter to the IOC warning that efforts by the Tokyo Olympic organizers and the Japanese government were inadequate to ensure the timber used for the Olympic construction would be legal and sustainable.[2] NGOs maintained that failure to promptly mitigate the risks by requiring robust due diligence measures on the timber used for the Olympics could result in harm to biodiversity, the climate and local communities.

On April 3rd, investigators found tropical plywood being used to mould concrete for the Stadium construction with markings that appear to belong to Shin Yang. (See photos (a) &(b) in the attachment). The markings resemble other Shin Yang produced plywood sold in Japan. (See photo (c) in attachment). Use of tropical plywood at the Stadium site was again confirmed on April 18th.

Shin Yang is notorious as one of the ‘Big Six’ logging companies of Sarawak, Malaysia, where illegal logging is widespread and the destruction of forests is one of the most extreme cases in the world. Shin Yang has been systematically logging and clearing pristine rainforest, including a large area in the transboundary conservation area known as the Heart of Borneo. In 2016, it was found to be clear cutting over 40 football pitches of intact rainforests a day.[3] Local communities and former employees of the company have independently alleged that Shin Yang hires armed gangsters to

intimidate and assault those who voice concerns or act against the company’s interests. Shin Yang is implicated in human rights abuses affecting Indigenous People who claim customary rights to forest. [4]. The “E-panel” marking on the plywood found at the construction site does not guarantee environmental sustainability or freedom from human rights abuses.

“Shin Yang is one of the most notorious exploiters of Sarawak’s tropical forests, and plywood from this company would fail to meet any sustainability criteria. Use of Shin Yang plywood would be a clear breach of Japan’s commitment to host a sustainable Olympics. ” said Peg Putt of Markets for Change.

“To use Shing Yang timber products is to deprive the vulnerable Indigenous Penan and Iban peoples of their customary rights, livelihoods, and cultural practices,” said Nicholas Mujah of Sarawak Dayak Iban Association.

An additional concern is that the Tokyo Olympics Organising Committee has allowed a loophole in its wood products procurement policy that exempts formwork plywood used to mould concrete from environmental sustainability and human rights standards.[5] The only policy that is applied is the extremely weak legality provisions of the Green Purchasing Law which has been repeatedly criticized for allowing wood at high risk of illegality to be imported into Japan as “legal wood”.[6]

“The National Stadium is a building constructed by the National Government and should be a place of national pride, but given the weak social and environmental standards being applied to the Olympic construction and the preliminary evidence that wood from a rogue company is being used, we fear this could be a scandal for the Olympics and Japan.” said Junichi Mishiba of Friends of the Earth Japan. “This evidence demands an urgent investigation into how the Olympic organizers are procuring timber for the Olympics and immediate adoption of stronger measures to ensure the timber is legal, sustainable, and not associated with human rights abuses.”

The environment groups are seeking an explanation from Japanese Olympics authorities and an open investigation to be conducted by a credible third party environmental auditor. The groups urged that until the issue is resolved, no more tropical plywood should be utilised on site.