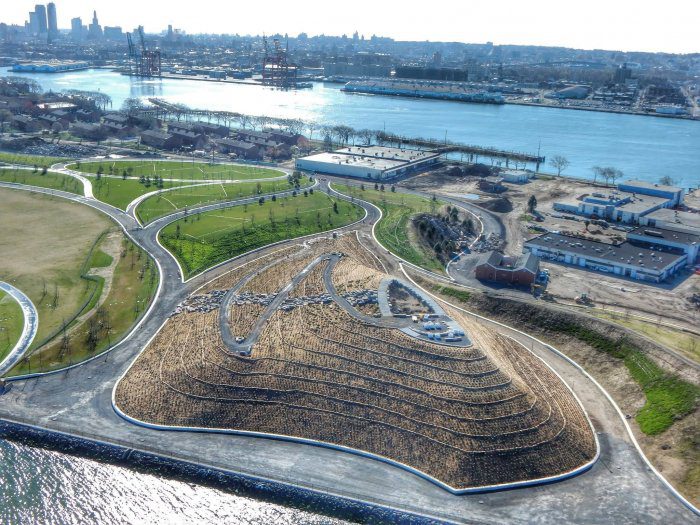 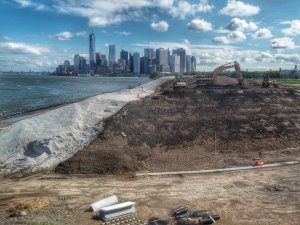 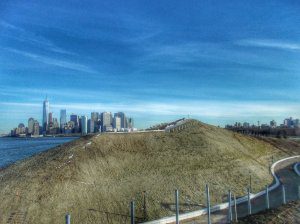 When backfill was placed and grading completed, Outlook Hill approached 60 feet of MSE height, while the crest of the hill sits 70 feet above sea level.

Construction on an island is no picnic. All equipment and materials must be barged in from remote sites. Managing the shipment of equipment and materials, in part through the congestion of New York City, is no picnic, either. Combine the two, and you have a challenging project in the heart of the world’s financial capital. Add in the creation of multiple hills, some in excess of 50 feet in height, and designing and installing them in such a way that they blend into what appears to be a natural environment, and you have the unique circumstances of the Governors Island Park project.

Governors Island has a unique history, sitting in the New York City harbor about 800 yards from the southern tip of Manhattan and 400 yards from Brooklyn. When standing at the edge of the island, it feels like you’re living in another time period while overlooking a cityscape from the future. The island feels as though it was plucked out of the mid 1800s, a throwback to a time when stone forts protected our cities and harbors. Some of the buildings on the site date from the early 1700s and 1800s, having been constructed as royal governor housing as well as military housing and support buildings.

The natural island is but a portion of the island that exists today. In the early 1900s, the army corp of engineers supervised the deposit of excavated materials from the New York City subway on the island’s southern end. This more than doubled the size of the island, but the fill material was left as a flat open area, which was later used for additional government service buildings and offered limited bearing resistance for oversized structures due to the relatively weak soils placed in the area.

The city of New York took ownership of the island from the U.S. government in the late 1990s, and many proposals were put forth during the next several years for how to utilize the island. Ultimately, the chosen proposal included transforming the island’s southern end into a park-like setting, incorporating the feel of naturally graded slopes into the environment, while blending the setting with art as well as views overlooking Lady Liberty and Manhattan. 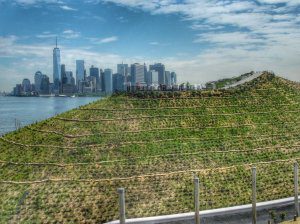 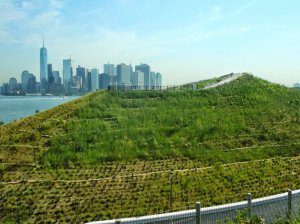 Outlook Hill is shown with vegetation established. The Manhattan skyline is in the background.

Building the natural slopes into the project required many rounds of engineering analysis as well as creative thinking and collaboration. West 8, the project design team, brought in Hart-Crowser Engineering as the geotechnical engineering expert in the early stages of project design. The team recognized the need to develop and analyze plans with a geosynthetics company who specialized in reinforced slope applications and offered a product that could withstand a wide variety of soil conditions and chemical properties.

Tensar was the geosynthetic manufacturer chosen, featuring an inhouse design team capable of supporting the project from conception through installation. Tensar was brought into the project to provide this support and proved to be a critical member of the team, with many design cases required to find the proper fit for the geometry and feel of the hills while meeting the project’s budget.

There were several hill geometries considered, with varying heights, slope angles and backfill material options. The project proposal included the construction of four main hills on the south side of Governors Island; two of which, Discovery and Outlook Hills, would be reinforced with geogrid to stabilize steepened facing at heights of 40 and 70 feet above sea level, respectively. It was important to design and shape the hills in such a way that the contours felt natural, as if Mother Nature had a hand in the process. 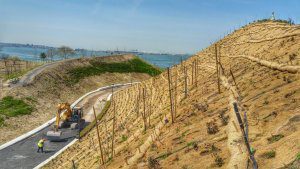 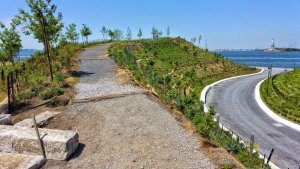 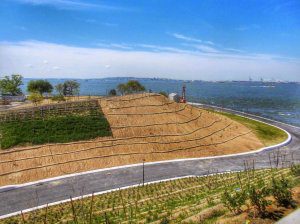 Discovery Hill’s Mechanically Stabilized Earth (MSE) segments fill the inside sweep of the hill and transition to a graded slope as the hill reaches toward the ocean.

Creating natural curves and contours while utilizing wire-basket facing and High-Density Polyethylene geogrids presented another challenge. Shaping the wire and reinforcing the slopes had to be laid out perfectly to create the desired natural feel. This was handled utilizing computer-aided design (CAD) 3D software, with plan views in 2.5-foot elevations with the facing laid out by segment around the complete curvature of the reinforced slopes. Beyond the reinforced slopes, part of the hills’ backfill was processed material from the island itself: crushed concrete from building foundations as well as barged-in lightweight pumice stone. 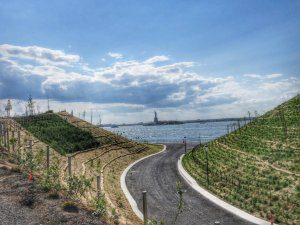 A view of Lady Liberty is encountered as you peer through the ravine between Discovery Hill (left) and Outlook Hill (right).

The lightweight pumice backfill was an expensive—but necessary—addition to the project to lighten the mass of Outlook Hill without lowering its desired height. Reinforcing the hill in areas with geogrid allowed for steepened, more-natural-feeling slopes. This unique combination of multiple fills within the hills required expert construction methods with a high level of detailed placement.

Bedford Carp Construction Inc. bid and was awarded the contract for construction of the Hills. Their prior experience transporting materials and equipment to the island proved to be hugely beneficial given the challenges such a project presents. 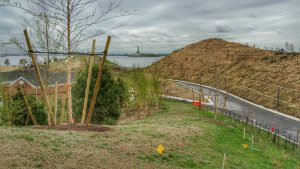 Outlook Hill (right) and Discovery Hill (left) blend into the natural enviroment, with slopes seemingly having been formed by mother nature.

The reinforced slopes change shape and steepened facing angles countless times within Outlook and Discovery Hills. The wire baskets were customized with special angles and lengths created to suit the project in a seamless fashion. To assist in the layout of the slopes to the precisely defined contours, shapes and elevations, Bedford Carp brought in Andrew Filshill, a local Mechanically Stabilized Earth construction expert. Together, they utilized the Tensar-reinforced slope geogrid and design plans to place materials with the required precision, while incorporating North American Green Turf Reinforcement Matting throughout to provide superior erosion protection.

Prior to construction being completed, the views of the Manhattan skyline were limited to the north end of Governors Island. One of the project’s highlight features was the overwhelming height of Outlook Hill, which rises 70 feet above sea level. Now, when standing atop the carefully crafted hill, the result is a terrific overlook of a grand vista, encompassing the harbor and city skyline as well as the island. The Hills on Governors Island reshaped the city of New York by becoming a must-see destination for visitors and New Yorkers alike.