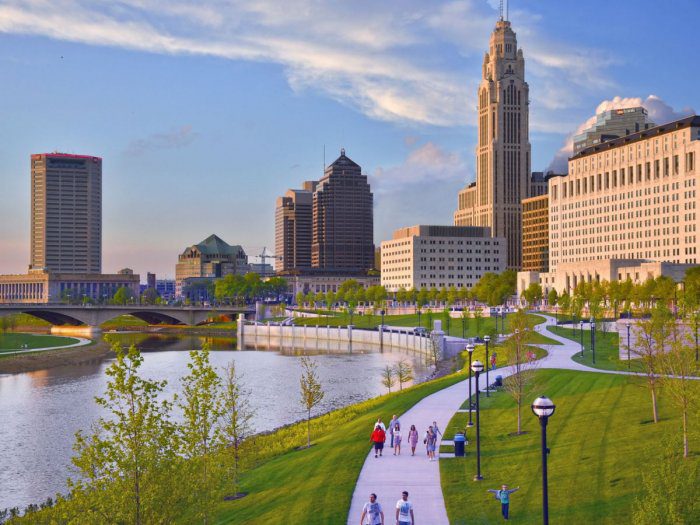 Scioto Greenways, Columbus, OH
Grand Award
In Columbus, Ohio, the Main Street Dam had—over the course of time—altered the natural channel and over-widened the river, damaging river health. In 2012, Stantec was brought in to lead a multidisciplinary team that would design and oversee the removal of the dam and restore the impacted reach of the Scioto River. Working closely with the City of Columbus and the project’s landscape architects, Stantec designed the dam removal, river restoration, multi-use trail connections, and public spaces. This project has created a stunning 33-acre greenway and restored river through the heart of downtown Columbus. In 2016, the Scioto Greenways project won a top national award from the American Public Works Association.

Fourth and Summit Complete Streets, Columbus, OH
Outstanding Achievement Award
The City of Columbus hired Stantec to author a plan to “better balance the travel modes” in an area where many did not own a car. A “Road Diet” was prescribed and then integrated into a resurfacing project designed by Stantec. In the end, one of three travel lanes were removed to bring capacity more in line with traffic volumes, allow for shorter crossing distances, provide 6.3 miles of bike lanes and ease time-of-day parking restrictions. This project demonstrated the exceptional collaboration among multiple stakeholders, firms, and the public in order to create a dynamic, accessible  travel route to be used by all in the City of Columbus by car, bike, or on foot.

Toledo Waterways Initiative – Dearborn CSO Storage Pipeline, Toledo, OH
Honor Award
Working on behalf of the City of Toledo and as part of the Toledo Waterways Initiative (TWI) Team, Stantec provided detailed design, construction phase engineering and RPR services for the Dearborn CSO Storage Pipeline project that consists of 2,200 lf of 132″ reinforced concrete pipe, installed through open-cut methods at depths exceeding 40 feet, within an extremely narrow construction corridor. The facility is designed to provide 1.6 MG of sideline storage for the City’s East Side Interceptor and includes three cast-in-place concrete structures, reconfiguration of the existing CSO regulator structure, influent screening, and baffles for control of floatable and settleable solids, flow regulation to the downstream interceptor and relocation of an existing CSO from the local marina to the main stem of the Maumee River. Dearborn is a key component in the implementation of the TWI Program in reaching its goals for water quality enhancement to the Maumee River, Maumee Bay, and Western Lake Erie.