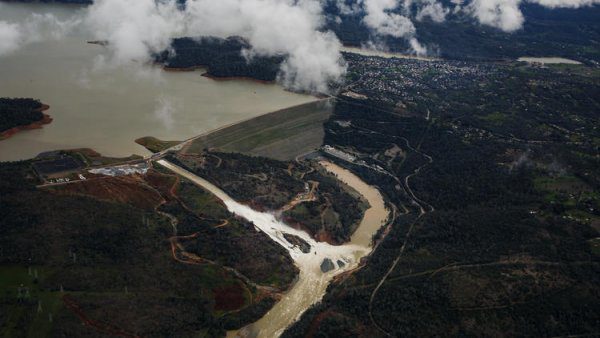 The badly damaged main concrete spillway at Oroville Dam was pounded by massive volumes of stormwater this month, but its failures occurred well short of the maximum flow that engineers designed the system to handle.

The spillway began breaking apart when its gates were opened Feb. 7, allowing 55,000 cubic feet of water per second to roar down the slope. That was only 18% of the 300,000 cubic feet of water the channel was designed to carry per second, one of the factors that raise significant questions about its design integrity, engineering experts said. Eventually, the gash that opened up had grown to 500 feet in length and dug a hole 45 feet deep in the earth.

Weakness in the aged concrete, inadequate repairs of cracks and instability in the ground under the spillway caused large pieces of concrete to break apart and tumble downhill, said Robert Bea, a retired civil engineering professor at UC Berkeley who led one of the investigations into the failures of the New Orleans levee system in Hurricane Katrina’s wake.

The failures in the concrete spillway will be investigated for a long time. But some of the nation’s top civil engineers are already pointing to some likely suspects: design flaws, misunderstood geology and poor maintenance over the years.

The Federal Energy Regulatory Commission, which has jurisdiction over the Oroville Dam, ordered the state on Feb. 13 to conduct a “forensic analysis” of the damage and said it was appointing an independent board of consultants that would have broad powers to review the investigation and oversee the repairs.

Nancy Vogel, a spokeswoman for the Department of Water Resources, which operates the dam, said in a statement: “Everyone will benefit from a full analysis of this incident, which is exactly what we will do. Right now our top priority is public safety and managing the active emergency response.”

The spillway is not part of the dam, but it is one of the most crucial safety systems at the site. It must sustain tremendous forces when storms fill the reservoir to its capacity, which was the crisis facing state engineers after continuous rains in Northern California had swollen the Oroville impoundment. When they opened the control gates, water rushed down the 3,000-foot-long spillway, which drops about 700 feet in elevation, at estimated speeds of more than 50 mph.

The forces the water imposed on the 50-year-old structure were enormous, far greater than those of a big rig truck pounding a highway. The dead weight of the water alone was more than 5 tons per square foot, and as it poured down the spillway its undulating motion exerted even more force on the concrete, Bea said.

Bea, a member of the National Academy of Engineering, bases his analysis on a review of inspection documents, original design documents and photographs of the damage, as well as interviews with engineers who helped design the dam.

Inspection reports show that trees had been growing next to the spillway, which could have damaged the ground that supported the heavy structure. When they were removed, they left bare ground adjacent to the spillway, a weak point, Bea said. Recent photos show that trees continue to line the area of the damage, which undercut the spillway’s vertical wall. In New Orleans, the failure of levees well below the forces they were designed to withstand was traced to a poor understanding of the strength of the soil.

An incident report by the Department of Water Resources also raises the possibility that the spillway was undermined by water running downhill outside the spillway, which eroded rock and soil that supports the structure. Any previous damage by the tree roots could have allowed the runoff to more easily wash away rock and soil, Bea said. A photograph of the damaged area shows erosion outside the wall of the spillway.

The dam was one of many built in a flurry of construction in the 1960s, when engineering analysis was far less sophisticated than it is today and engineers had to rely on slide rules rather than computational models.

“It was an accident waiting to happen from Day One,” said Don Colson, a retired engineer who worked on the Oroville Dam design in the 1960s and went on to a 36-year career at the state water agency. “This was a mistake that went back to the very beginning.”

Colson, who worked on other parts of the dam, said the design of the spillway never fully analyzed the potential for cavitation, which occurs when roiling water creates air pockets that cause high-pressure intrusion into cracks and fissures. The action can chew through thick concrete and even steel.

Dam spillways have a long history of problems with cavitation. The spillways at Hoover Dam have been used twice, and both times they sustained heavy damage, similar to what happened at Oroville. Cavitation caused concrete to fail and resulted in scouring of the surrounding rock. Glen Canyon Dam, also on the Colorado River, sustained massive damage in 1983 when its underground spillways were put to use. Dams in Pakistan and Brazil have also proved the potential for cavitation to damage spillways.

J. David Rogers, a dam expert at Missouri University of Science and Technology who has written books on past dam failures, said long spillways such as the one at Oroville create difficult engineering problems. A 3,000-foot stretch of concrete can shrink 15 feet as it cures, creating gaps between panels. Thermal expansion and contraction over the years reopens gaps, allowing cavitation to expand the holes.

Oroville’s spillway was also fighting gravity, having a tendency to slide downhill, opening more gaps on its surface over the years, Rogers said. Meanwhile, the long drought probably caused the underlying soil to shrink, creating underground fissures that the drenching rains this year would have easily filled in the foundation, he said.

“You have to grout these things in perpetuity, and that is what we are doing a poor job on as nation and a state,” Rogers said.

The Army Corps of Engineers and the American Society of Civil Engineers have long warned that many of the nation’s dams are not receiving adequate maintenance. Rogers said that over the years, dams have operated closer to their maximum storage, providing less space for flood control, as political pressure has grown to maximize water storage and electrical generation.

All of the engineers said the state will likely have to replace the entire spillway, given the damage that occurred at such a moderate rate of discharge. That could cost more than $100 million, they estimated. And there are hundreds of thousands of cubic yards of debris that were deposited in the Feather River that will have to be dredged out to allow the dam to operate normally.