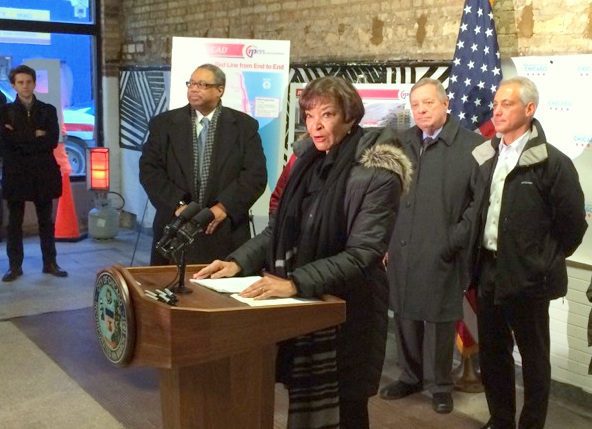 CHICAGO – The U.S. Department of Transportation’s (DOT) Federal Transit Administration (FTA) today announced approximately $1.07 billion in federal grant funds to the Chicago Transit Authority (CTA) for the first phase of the Red and Purple Modernization Project. The project will reconstruct a section of the rail lines on the north side of Chicago in order to expand capacity on one of the busiest corridors of the CTA system.

“For the past eight years, the Obama Administration has been committed to investing in transportation infrastructure projects that will help more Americans access jobs and new opportunities,” said U.S. Transportation Secretary Anthony Foxx. “That’s why we are proud to support the Red and Purple Modernization Project, which will bring better transit service to thousands of Chicagoans who take the train to work, school and other destinations throughout the region.”

The project involves construction of track improvements north of the Belmont Station to relieve a bottleneck at the junction of the Red, Purple and Brown lines; reconstruction and expansion of four stations to better accommodate current and projected demand; upgrades to the power, track and signal systems; and the purchase of 32 new railcars.

“FTA is awarding highly competitive grant funds for this project because there is a clear need for transit improvements in this busy, crowded corridor,” said FTA Acting Administrator Carolyn Flowers. “When completed, this project will make a big difference for CTA riders with increased service, less crowding aboard trains, and better waiting conditions at larger reconstructed stations.”

FTA Acting Administrator Flowers made the announcement to commit the funds during a ceremony today with Senator Dick Durbin, Chicago Mayor Rahm Emanuel, representatives from CTA, and other local officials.

DOT is contributing approximately $1.07 billion toward the $2.067 billion project. Federal funds include a core capacity construction grant agreement for $956.61 million through FTA’s Capital Investment Grant (CIG) Program, and approximately $116 million through the Department’s Congestion Mitigation and Air Quality Program. The CIG funds will be provided over the course of nine years on an annual payment schedule, subject to Congressional approval during the annual appropriations process.

The CIG Program is the nation’s primary grant program for funding major transit capital investments. Projects accepted into the highly competitive program must go through a multi-year, multi-step process according to requirements in law in order to receive program funds.