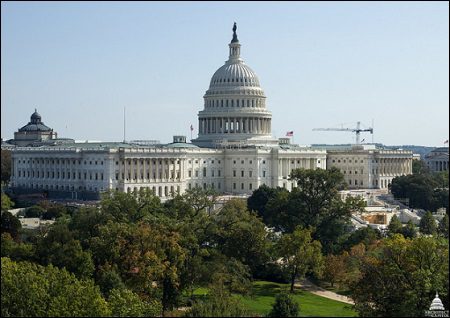 The Senate completed work late on Dec. 9 on a continuing funding resolution that would keep most federal programs operating at fiscal 2016 levels through April 28, passing it 63- 60 36. That sent the measure to President Obama just in time to avoid a shutdown of most federal agencies that could have taken place starting Dec. 10.

Its passage means state departments of transportation and transit agencies will not be able to tap into the scheduled funding hikes that were originally to begin Oct. 1, under the Fixing America’s Surface Transportation Act that Congress authorized and funded last year.

capitol0816.jpgThe stopgap continuing resolution or CR includes $1 billion for the Federal Highway Administration’s emergency relief account, which it often taps to provide initial or “quick-release” funds to state DOTs to help with immediate costs in the aftermaths of major storms or other natural disasters. The FHWA also uses that account to periodically reimburse DOTs for larger amounts after the states have been able to assess their longer-term costs from such events.

The $1 billion the CR provides to the FHWA’s emergency account is out of general funds, and is in addition to the annual $100 million authorization the agency receives for emergency relief aid out of the Highway Trust Fund.

The CR also provides the Army Corps of Engineers with $1.025 billion more for repairs to flood and coastal storm protection projects and dredging, and $4.1 billion in disaster relief through the Federal Emergency Management Agency and perhaps other federal offices to address damages caused by recent natural disasters including Hurricane Matthew, plus floods, drought and other severe weather events.

Earlier, the initial stopgap funding bill had delayed the scheduled FAST Act funding increases through Dec. 9, with the expectation that Congress might complete a full-year budget this month that would allow states to use those funds.

The delay into next calendar year allows states and transit agencies to access about 55 percent of the federal highway and transit funding they received in 2016. However, it also means states cannot tap those increases in highway and transit funds that Congress provided for fiscal 2017 in the FAST Act until well into the period when they plan their yearly project schedules.

But the delay will allow the incoming Trump administration to weigh in on current-year budget issues after Donald Trump assumes the presidency Jan. 20.

Democratic leaders on the House Transportation and Infrastructure Committee had asked appropriators in a Nov. 28 letter to allow the scheduled FAST Act increases for fiscal 2017 to take effect.

The T&I Democrats warned that by delaying the increases into next spring and the start of the 2017 construction season, some infrastructure projects that state DOTs and transit agencies would want to begin next year could be delayed along with the economic benefit they would bring.