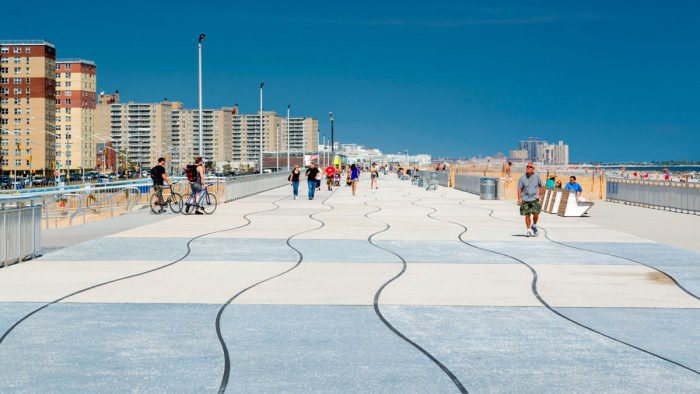 NEW YORK – The reconstruction of the iconic Queens, New York, Rockaway Boardwalk, which was destroyed during Superstorm Sandy, was honored recently in Washington D.C. with a 2016 Excellence on the Waterfront Award.

The annual awards program, sponsored by the nonprofit Waterfront Center, recognizes top-quality waterfront projects from around the world for their design, economic feasibility, participatory planning, environmental sensitivity and provision of the maximum amount of public access.

As noted by one of the award jurists, “…even by New York standards, this (Rockaway Boardwalk) project is ‘amazing.'”

The New York City Economic Development Corporation and the city’s Department of Parks and Recreation, working with the U.S. Army Corps of Engineers, commissioned a team led by CH2M, along with RBA (an NV5 Company) and WXY, to reimagine the approximately 5 miles of beachfront with a storm resilient, creative vision.

Central to the community’s history and identity, the boardwalk project combines resiliency and recreation in a unique way for a better-protected and more active Rockaway peninsula. The design replaced the formerly wooden structure with concrete, elevated the boardwalk which is 3 feet above the Federal Emergency Management Agency’s 100-year storm elevations and incorporated modular elements for rapid construction.

Through an extensive public outreach process, the residents of the Rockaways made it clear that the landmark – their “Main Street” – needed to be returned to its former greatness as a destination.

The new boardwalk is decked with light blue and sand-colored concrete planks undulating to mimic the ocean waves that lie to the south. Designated bike lanes and a multitude of curved, ADA-compliant ramps allow patrons physical and visual access to the waterfront along the length of the boardwalk.

CH2M’s maritime professionals undertook detailed coastal modeling to determine the effectiveness of the USACE’s associated beach nourishment and flood protection projects, which included seawalls, dunes and other protective structures. The sand dune’s augmentation and enhancement, reinforced by sand fences, plants and dune walkways, was the project’s primary environmental aspect and of great concern to the community since the planted sand dune acts as the first line of defense during storms. The dune also provides a habitat for the piping plovers that are native to the peninsula along with other ecological species.

The reconstruction of the boardwalk was key for the sustained economic development of the Rockaway peninsula, and the NYCEDC put a high priority on rebuilding and improving the waterfront structure to help the community recover.

Residents are moving back, businesses and shops are being restored and reopened, and commercial and residential buildings are going up. As the longest and largest resiliency project completed to date by the city of New York, the Rockaway Boardwalk has once again become a thriving public open space and major recreational destination.