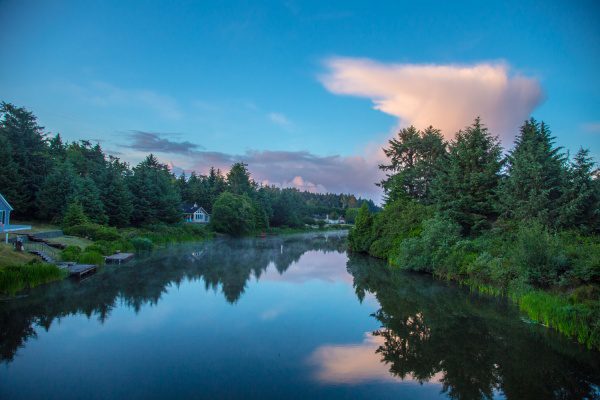 But there have been lingering questions about long-term operations and maintenance (O&M). Will a vacuum sewer with its valves and pumps hold up for multiple decades? Will it require constant attention as the system ages? Are the components durable and easy to work on? These are important questions when spending public dollars.

The city of Ocean Shores, Wash., offers a valuable test case for vacuum sewer reliability and endurance. The city’s vacuum system is one of the largest in the world, and it’s also mature; most of its components are more than 20 years old and must function in a challenging operational environment.

What makes Ocean Shores even more valuable as a sewer system comparison study is that it also has gravity sewer and grinder pump systems to maintain. The Ocean Shores wastewater department gets a daily comparison of the various systems and can offer an informed comparison of its maintenance issues.

Like many seaside communities, Ocean Shores began as a collection of mostly vacation homes and campsites. Located about 50 miles west of Olympia, Wash., the small community incorporated in 1970 with a population of about 900. At the time, lot sizes averaged about 7,600 square feet and nearly all had septic sewer systems to handle wastewater. AIRVAC vacuum stations are unobtrusive, odor free and have a relatively small footprint.

Its location on the Pacific Ocean encouraged growth and tourism. Up to 8,000 people were in Ocean Shores on summer weekends by the mid 1970s. Predictably, the high concentration of septic tanks and limited wastewater treatment led to a eutrophication problem that showed up as algae bloomed in the area’s many canals and ponds. In 1980, a consultant recommended gravity sewers be installed throughout the town, but residents were cool to the idea due to the staggering cost estimate: $80-$90 million.

“That was quite a chunk of change,” notes Miles Beach, who recently retired as the city’s waterworks superintendent. “A lot of that cost was to excavate and then repave the streets for collection lines, and install more than 50 lift and pump stations.”

That solution proved too expensive for Ocean Shores. The septic tank problem sat on the back burner until the 1990s, when the state of Washington implemented a new environmental policy stating that house lots had to be a minimum of 15,000 square feet to accommodate a septic sewer system. This resulted in a construction moratorium in Ocean Shores and stagnant economic development.

“That led us to look at alternative sewer systems,” adds Beach. “It turned out that vacuum sewers were the lowest cost. Our public works director at that time got in touch with AIRVAC. After some research, we decided to do a test project. We worked with their engineers and came up with a design estimated to cost $4.5 million for about 2,400 connections. It actually cost less—about $3.8 million.”

That initial test project was completed in 1995 with minimal disruption to the community. After three years of successful operation, the city council decided to install vacuum sewers throughout the town with the exception of three areas: downtown, which already had a gravity sewer, and two small areas (a school and a state park) that relied on grinder pumps. The city imposed a tight timeline of two years to complete its new vacuum sewer system, but the project took only 18 months with five different contractors collaborating on the effort.

Marshall Read has operated the city’s vacuum sewer for more than 20 years—he and a crew of three inspect the system daily. They’re intimately familiar with every detail of the AIRVAC system and have two decades of data to back them up.

“In flatland conditions like we have, with a high groundwater table, vacuum sewers are by far the best alternative of all sewer systems,” says Read. “Maintenance on vacuum sewers is very easy, even after 20 years.”

The current AIRVAC system in Ocean Shores was designed to serve 11,520 lots. Service currently is provided to more than 10,000 lots, some permanently occupied and some not. There are approximately 4,800 active vacuum valve pits, 96 miles of vacuum mains and seven vacuum stations. A $12 million treatment plant built in 2000 serves the city and some of the surrounding communities in Grays Harbor County.

Daily sewer maintenance includes stops at the seven vacuum stations. The duties are divided among the three members of Read’s team.

“We do a daily inspection at each station, which takes about 30 to 45 minutes,” notes Read. “We do a little cleaning, and we check the systems. We typically change the oil in the vacuum and sewer pumps once or twice a year. The oil that comes out of them looks new. These pumps are all 17 years old or more, with about 9,000 hours of operation each.” Marshall Read and Miles Beach have been instrumental in Ocean Shores’ vacuum-sewer operation for the last two decades. Here they conduct a daily vacuumstation check in a clean working environment.

There are about 4,800 active valves in the Ocean Shores vacuum sewer system. It’s estimated that the combined active valves in the system cycle or “fire” approximately 4.8 million times per month. Because of the area’s high water table and sandy soil, many of these valves and controllers are in standing water for six to eight months a year. Yet the durability of the devices is remarkable, according to Read.

“In the course of a year, we probably replace less than a dozen valves,” explains Read. “Typically it is because an internal breather popped out and is allowing sewage to get around the valve. We’ll replace that valve with a working valve, and take the one that was removed back to the shop for a good cleaning and testing. We keep it and reuse it when another valve needs to be cleaned and tested. We keep very few replacement parts in stock.

“In 20 years, we’ve probably purchased less than $3,000 in component parts,” he adds. “Most of the controllers and valves have been in daily use since 1996 and never needed repair.”

Read notes that most call-out situations involve a vacuum valve sticking in the open position. Rarely do they have more than five or six callouts in a month and, in the summer, when the groundwater is lower, that number drops to two or three callouts per month.

A stuck valve doesn’t impact homeowners, as their service typically is unaffected. In fact, most homeowners are unaware when valves stick open. A stuck valve most often is detected by an alarm at the vacuum station. An auto-dialer system alerts Read, who either handles the problem himself or dispatches one of his crewmembers. The issue is usually resolved within 90 minutes.

On very rare occasions a valve has stuck in the closed position, which can potentially lead to a sewage backup. However, Read notes that while there are cases of minor, non-reportable backups, a sewage backup resulting in a significant claim against the utility has occurred only twice in 20 years of service.

Leaks in a vacuum main or lateral likewise are rare. Leaks typically are caused by another utility damaging a main or lateral with a backhoe. Read said his team can detect the location of small leaks by looking at the diagnostic data at the vacuum station to determine the specific area, then listening for the sucking sound of air rushing in.

“That’s one of the things we appreciate about vacuum sewers; if there is a leak in the line, vacuum pressure sucks in whatever is around the hole rather than sewage pouring out into the environment,” notes Read. “We don’t have to do a line repair standing in sewage. We can usually locate a leak in less than 30 minutes. If you can’t find it in 30 minutes, it must be a very small hole.”

Vacuum sewer line repair usually is quick and easy, because collection lines are buried only 3 to 4 feet deep. A small backhoe typically is all that’s required to excavate a leaky pipe.

20-Plus Years and Counting

In 1998, Ocean Shores completed a near citywide installation of an AIRVAC sewer system. Beach says the cost was approximately $36 million, far less than the $90 million estimated to install a gravity system. Although the savings were significant, there were those lingering questions about the long-term maintenance costs of vacuum sewers.

“When we did the pilot project study in 1993, we calculated that the present value estimate comparison for vacuum sewers and gravity sewers would intersect in 20 years,” he notes. “At that point, we predicted that vacuum sewers would be more expensive due to maintenance and upkeep. This was based largely on data known at that time.

“It has been 23 years now, and we’re still not close to seeing the O&M costs that were originally estimated,” Beach continues. “We have not crossed the present worth value line, and it will likely be another 10 years before these lines intersect.”

Beach’s comments raise a question: Are the O&M cost data published in the Water Environment Federation (WEF) Manual of Practice (2008) representative of today’s vacuum sewers? The O&M cost information in the WEF manual often is cited when engineers project the long-term costs associated with vacuum sewers. Although the information in the manual is the latest available, it only cites data from vacuum sewers installed prior to 2004, including some of the earliest vacuum systems installed in the 1970s when the technology was in its infancy. Many vacuum station operations can be monitored and adjusted from a control desk.

Clearly, vacuum sewer component design has improved significantly since then, to the point where O&M costs are far less than the WEF data would indicate, as evidenced by Ocean Shores’ experience.

Beach and Read are enthusiastic about the value of Ocean Shore’s AIRVAC system. Both have extensive experience with gravity and low-pressure systems, and they believe vacuum sewers are easier and less expensive to maintain than the other sewer systems.

“Compared to grinder pumps and STEP (septic tank effluent pumping) systems, I’d choose vacuum sewers every time,” confirms Read. “In my mind, it’s the way to go with regard to operational integrity. It’s the least prone to trouble, and, if you do have trouble, you are not wading in sewage.”

“I would invite people to look at Ocean Shores’ sewers today after nearly 25 years and see how low the O&M costs are,” adds Beach, who spent 36 years in public works before retiring in 2013. “I’ve never been more pleased with a system in all my life.”

Steve Gibbs is a freelance writer in Memphis, Tenn., with more than 25 years of experience writing about public works infrastructure; e-mail: stevegibbsmemphis@gmail.com.