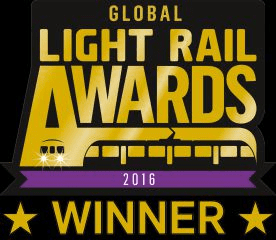 The joint venture took home a trio of awards including the Significant Safety Award – for the range and variety of initiatives developed and implemented by the team; to enhance the safety and well-being of all concerned and impacted by the work – and the Project of the Year(under 50m Euros), for the works at the new Exchange Square Metrolink stop.

This is the fourth time MPT has secured the project of the year award, beating off fierce competition from at home and abroad. Exchange Square, which opened in December last year, scooped top spot due to the high quality, unique and stylish piece of infrastructure built by MPT, in the heart of Manchester’s retail district.

Collecting the award on behalf of Transport for Greater Manchester (TfGM) and MPT, Peter Cushing, Metrolink Director, said: “I speak on behalf of everyone who worked on delivering the project, on time and within budget, when I say that we are all absolutely delighted to pick up this award. The Exchange Square stop is a fantastic piece of architecture that not only looks great but serves to provide our customers with the quality waiting area they deserve.”

MPT were also highly commended by the judges in the Best Environmental and sustainability initiative for the “Leaving a legacy without leaving a footprint” programme.

Peter Jones, MPT project director said: “It’s true to say that this latest addition to the Manchester Metrolink network, delivered by MPT, has had a profound and positive effect on the city.  Working in partnership with TfGM, we have formed a strong and dynamic working relationships with stakeholders, that has helped deliver a truly world class light rail transit system for Manchester, once again acknowledged by these prestigious awards.“

Formed of Laing O’Rourke, VolkerRail and Thales, MPT is tasked by Transport for Greater Manchester with delivering the £900m expansion programme for the Manchester Metrolink network.