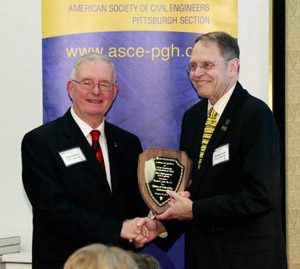 Based in the Pittsburgh, Pennsylvania, office, Leech managed major bridge, tunnel, and highway design projects during his 47 years with Gannett Fleming. Before retiring in 2014, Leech led significant western Pennsylvania projects, including the Hulton Bridge, the Joe Montana Bridges, the Bloomfield Bridge, the Squirrel Hill Tunnel rehabilitation, and the forensic evaluation of the Kinzua Viaduct collapse.

Leech has published more than 50 articles in national and international journals, conference proceedings, and magazines and made numerous presentations at national and international conferences. In addition, he was the editor of the book, “Reflections…of the Greatest Engineers and Architects of the 20th and 21st Centuries” and the lead technical author of the panel text illustrating the “Bridges of Pittsburgh” mural at the Greater Pittsburgh International Airport. Leech coauthored his most recent book with Linda Kaplan. The new book, titled “Bridges…Pittsburgh at The Point…A Journey through History,” features a detailed historical record of all the bridges that have ever been built within one mile of The Point in Pittsburgh between 1818 and today.

During his career, Leech was an active member of the ASCE, the Engineers Society of Western Pennsylvania, the Association for Bridge Construction and Design, and the Association of Highway Engineers. He continues to serve on the International Bridge Conference Committee.

ASCE is America’s oldest national engineering society, and the Pittsburgh Section has nearly 1,700 members, representing engineering and construction interests for communities throughout western Pennsylvania. The society presented the awards as part of the National Engineers’ Week celebration.