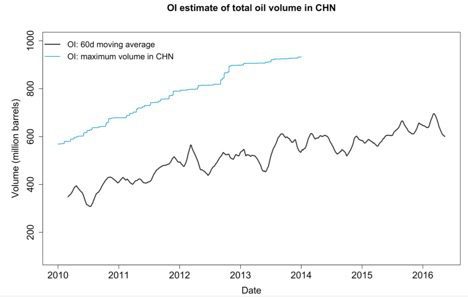 Orbital Insight, a US-based geospatial analytics and software company, today announced the general availability of China Oil, the latest addition to its global oil supply monitoring tools. Using a proprietary combination of machine learning and computer vision, Orbital Insight can analyze satellite imagery to accurately estimate how much oil is being stored in China at any given time. This product joins other offerings from the company, which include retail parking lot car counts, freshwater reserves, poverty mapping, and more, to bring transparency to decision makers.
To obtain an accurate estimate of oil supply, Orbital Insight analyzes high-resolution satellite images from DigitalGlobe and Airbus to identify oil tanks around the world. Then, the company’s algorithms track the changing shadows cast by the floating roofs of the tanks. The shadows lengthen and shrink as the roofs rise and fall with the changing oil levels. From the shadows, the company calculates the fill level of each tank across the region to measure total oil storage in China.

This product has been available for US markets since June 2016 and has proven to be highly reliable and accurate. Orbital Insight compared and backtested its US findings against six years of data from the U.S. Energy Information Administration (EIA), closely matching the EIA’s weekly reports. Trusted data on the number of barrels stored in China is harder to find, but since the estimates are done using the same satellites and the same processing techniques, the company believes the accuracy is similar.

In trials of the China Oil product, Orbital Insight has found oil storage tanks that were previously unknown to international organizations. Orbital Insight identified 2,100 strategic and commercial petroleum reserve tanks capable of storing 900 million barrels of oil at the end of 2014 — four times more than the 500 tanks reported in the industry standard database of tank farms, TankTerminals.com.

The company’s most recent estimate counts approximately 600 million barrels of crude oil supply in China in May 2016. The value of this product is that it provides an independent and unbiased measurement for oil supply that relies on satellite imagery — not third-party surveys or Chinese government data — to derive its numbers.

“We’re excited to help make the Chinese oil supply more transparent for stakeholders around the world with this new product,” said Dr. James Crawford, founder, and CEO of Orbital Insight. “This product has proved a reliable tool in US markets, so we’re thrilled to expand it to China, the world’s second-largest economy.”

Orbital Insight works at the intersection of big data and the commercialization of space and is the first mover in large-scale analysis of satellite and UAV imagery. The company has developed algorithms to count and measure objects like cars, agricultural fields, buildings, and more to provide a big-picture understanding of the world that’s quantitatively grounded in observation. The company works with more than 70 asset management firms, several U.S. government agencies, and two global non-profit organizations.