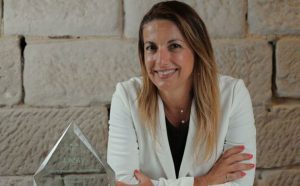 SYDNEY — AECOM, a premier, fully integrated global infrastructure firm, announced today that Athena Venios, its Transport Technical Director for Australia and New Zealand, has won the Judy Raper Award for Leadership; an award that celebrates a female University of New South Wales (UNSW) graduate who has made a significant contribution to the advancement of Australia’s engineering profession.

“Athena’s passion for excellence in engineering not only ensures that she excels in her work, but that she inspires all who come into contact with her,” said Alexandra Bannigan, manager of the UNSW Women in Engineering program.

Ms. Venios has been a dedicated leader and mentor over her 20 year career in the engineering industry. In receiving the Judy Raper Award for Leadership, she has been recognised for her legacy-creating leadership of transport and infrastructure programs for the 2000 Sydney Olympic Games, the 2004 Athens Olympic Games and the 2006 Melbourne Commonwealth Games.

In her position as a technical director at AECOM, Ms. Venios leads multidisciplinary teams responsible for delivering complex transport projects, in collaboration with government and other key stakeholders. She is currently heading up a diverse team which has been tasked with preserving a new corridor for the future Outer Sydney Orbital, as part of New South Wales long term transport master plan. Ms. Venios is also passionate about mentoring staff, particularly women and she believes this is a vital part of professional growth. She is a committee member of AECOM’s Diversity & Inclusion Committee.

Commenting, Ms. Venios said: “As an engineer I have been fortunate to be involved in some truly transformational projects, working with some inspiring individuals here in Australia and overseas. I’m honoured to accept the Judy Raper Award, for me leadership is about inspiring and lifting the capability of those around you, enabling them to achieve their true potential. I’ve had some great mentors over the years and I am delighted that I’ve been able to fulfil that role for others in return.”

As the recipient of this illustrious award, Ms. Venios joins an elite group of female influencers with past winners of the award including Vicky Binns, vice president for Copper Marketing at BHP Biliton, Pia Seeto, portfolio director for managed services at Ericsson; and Dr. Mehreen Faruqi, Greens Upper House MP, New South Wales Parliament. The annual awards are an effort by UNSW’s Faculty of Engineering, to attract more women into engineering.

“Today, we are at a crossroads in engineering – engineering is still 87 percent male. At just 13 percent, women remain under-represented both in industry and academia, and this needs to change,” Mark Hoffman, UNSW dean of engineering said in a speech at the awards. “Although it brings so much good in the world – from medical devices that save lives, to access to water in poor regions –engineering has found it hard to integrate women into every facet of the discipline.”

Hoffman, who became Dean of Engineering in 2015, has set a goal to raise female representation among students, staff and researchers to 30 percent by 2020.