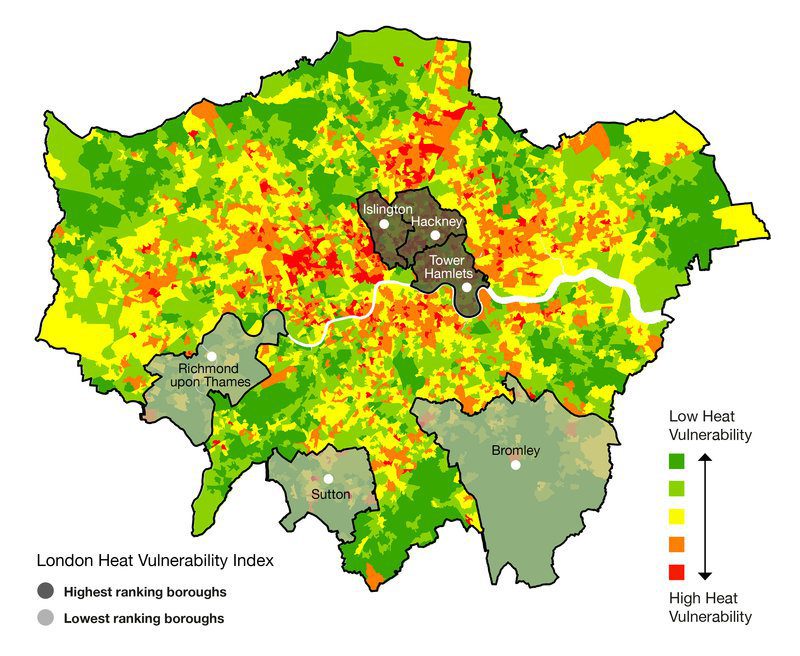 New report reveals Hackney, Islington and Tower Hamlets have the greatest number of high vulnerability areas, where elderly are especially at risk from heat related illnesses as the capital gets hotter.

These areas combine risk factors including; high population density, a greater proportion of elderly with health and mobility issues and poorer quality housing. The warning comes at a time when the capital is on track for its warmest summer on record, with recent temperatures reaching over 33°C.

The Arup-led study highlights the risk of heat waves to the elderly in London and aims to improve awareness of the practical steps that can be taken to alleviate the problem. Satellite data was used to obtain surface temperature maps for the capital, revealing differences of as much as 10oC during the 2003 heat wave. The phenomenon known as the “Urban Heat Island Effect” occurs when heat is absorbed and released by buildings and paved surfaces, resulting in a warmer micro-climate. Built up areas in cities with a lack of trees and green space are most impacted.

The report combines satellite data with socio-economic factors, including population density, health, mobility and quality of housing, to understand where the population is most at risk. The borough of Hammersmith and Fulham has high land surface temperatures, but due to socio-economic factors scored low on the heat vulnerability map. Richmond upon Thames, Bromley and Sutton contained the lowest concentration of those at risk.

High temperatures present a particular risk to the elderly, with the over 65s being susceptible to heat-related illnesses such as heat stroke and exhaustion. Heat waves can also exacerbate impairments associated with pre-existing health conditions such as asthma, heart disease and diabetes. Major heat waves hitting the capital are expected to increase from being once every two decade events, to occurring every three years by 2050. Heat waves are identified as prolonged periods of excessively hot weather where the temperature exceeds the average maximum temperature by 5°C for five consecutive days.
“The combination of climate change, rapid urbanisation and ageing populations is increasing the impact of extreme weather events, such as heat waves, experienced by global cities like London. We all – planners, urban designers, engineers, property developers and politicians – have an opportunity to help vulnerable members of our communities cope with increasing heat waves. Measures don’t need to be expensive – but we need to take action now. For example, something as simple as planting more trees now will provide vital shade for communities and significant cooling benefits in decades to come.”