/ Buildings / The Man Who Saved the Skyscraper

The Man Who Saved the Skyscraper 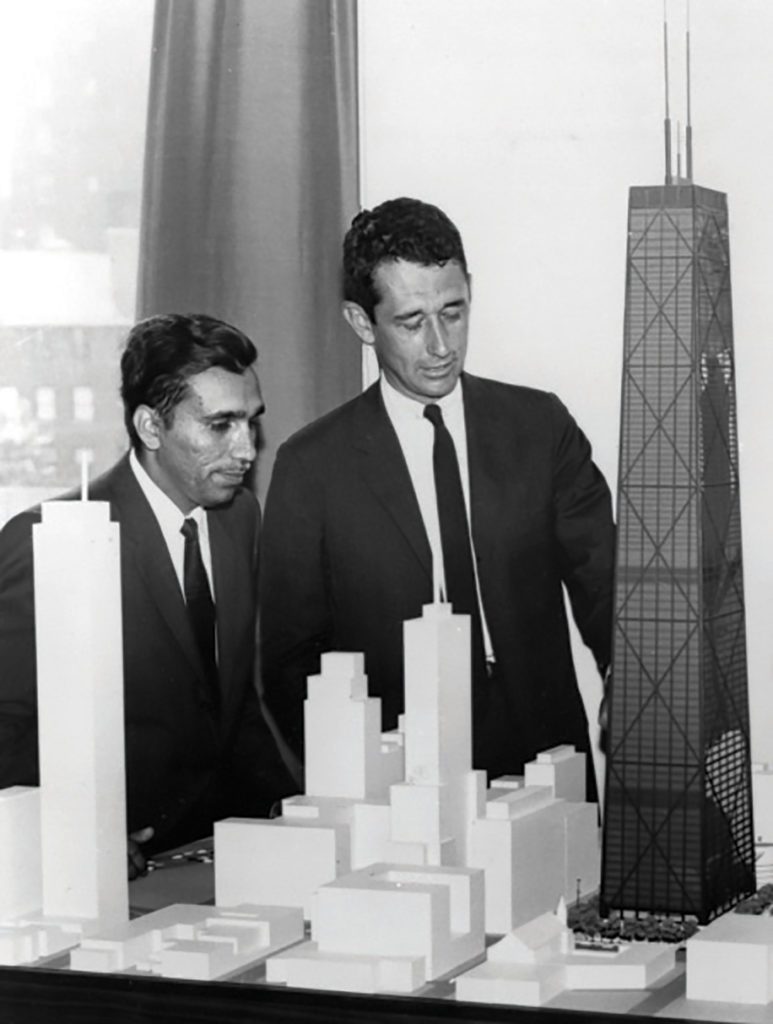 Parul Dubey on August 24, 2016 - in Buildings
In December 1965, the psychic Jeane Dixon made a prediction: Chicago’s John Hancock Center would come tumbling down. The astrologer and syndicated columnist had risen to fame after predicting the assassination of John F. Kennedy, and now she foresaw the demise of the Windy City’s newest, and soon-to-be tallest, skyscraper—before construction had even begun.When Dixon spoke out, crews had just broken ground on a plot of land north of Chicago’s main business district. Those involved may not have admitted it, but the prediction likely made them nervous—and not just because of Dixon’s track record. The 100-story building was to become the second-tallest structure in the world, and its radical design was unprecedented.Structural engineer Fazlur Rahman Khan, the man behind that design, was only 35 years old when he submitted his plans. He had worked at the Chicago architectural firm Skidmore, Owings & Merrill (SOM) for just a decade. For the architecture world, he was remarkably young. But if he was wet behind the ears, he didn’t show it.Khan’s easygoing nature was legendary among his colleagues. And he had his own read on the future. At upper-crust Chicago parties, he’d entertain high-society women by reading palms and telling fortunes, a trick he’d learned as a boy growing up in Dhaka, Bangladesh. Khan was unmoved by Dixon’s prediction. A tumbling John Hancock Center would end his career, but he had worked hard to prove the integrity of his design, and no newspaper astrologer could convince him otherwise.Then, one day in March 1966, he received a phone call: His skyscraper was sinking.

Fazlur Khan seemed an unlikely candidate for engineering stardom. The tallest structure in his hometown of Dhaka was fewer than three stories high. He didn’t see his first skyscraper in person until he was 21 years old. In fact, he likely had never even stepped inside a mid-rise building until he moved to the United States to study structural engineering at graduate school. But Khan, the son of a mathematician, proved to be a civil engineering wunderkind. He received two master’s degrees in just three years.

At the University of Illinois, he studied under Hardy Cross, a legendary engineer who taught Kahn not to see buildings as concrete monoliths, but as living things. Cross had a mantra: “You must learn to think as the structure thinks.” Many ridiculed Cross’s ideas, writes Khan’s daughter, Yasmin, in her book Engineering Architecture, but Khan took the advice to heart.

The Hancock was a muscle-bound, Prohibition-era gangster clad in a tuxedo.

“I put myself in the place of a whole building, feeling every part,” Khan said in an interview with Engineering News-Record. “In my mind I visualize the stresses and twisting a building undergoes.”

Khan preached “structural empathy,” believing that buildings should absorb stress and react accordingly. If someone pushes you in the chest, your ribs alone don’t prevent you from falling—your stomach clenches, your calves brace, and your heels dig into the ground. The pieces work in tandem. The same went for skyscrapers.

When Khan and his friend and design partner, architect Bruce Graham, sat down to design the Hancock Center, the architectural world was in the midst of a break from skyscrapers. “Conventional” skyscrapers like the Empire State Building had proven prohibitively expensive. The higher a building, the more weight is exerted from the top. The building must also withstand winds, and these forces—downward and lateral—turn skyscraper construction into a riddle. A lot of steel and concrete is needed to keep a super-tall building standing, and all that material shrinks usable open space, riddling floors with dark, labyrinthine corridors. If you don’t have floor space to sell, what’s the point of making a building tall?

Khan had a solution. A few years earlier, Graham had asked him what the most economical building would look like. Khan replied, “A tube.” Like the bamboo that sprouted around Dhaka, a hollow tube lent a high-rise vertical durability.

Graham and Khan put the theory into practice while constructing Chicago’s 42-story Dewitt-Chestnut Apartments. The building was supported not by an inner grid of concrete and steel, but by its facade. Structurally, it had more in common with a grain silo than a traditional skyscraper—but it worked. The duo now had the blueprint for pursuing more ambitious structures.

Indeed, Khan’s plans for the John Hancock Center used the same tubular design to an extreme. But to achieve heights topping 1,000 feet, it needed more support. Rather than fill the interior with columns—and retreat back to the thinking of Stone Age architects—he applied a theory he had cooked up with one of his students at the Illinois Institute of Technology. The student, Mikio Sasaki, wondered how to build a tall, cost-effective tubular building. The solution? Reinforce the facade with large x’s.

“It became a proven new structural concept waiting to be tested on a real building,” Khan wrote. “John Hancock Center offered that opportunity.”

Elegant and economical, Khan’s design for the John Hancock Center was supposed to usher in a new generation of skyscrapers. But when it came time to hoist thousands of tons of steel up into the sky, his employer got cold feet. To dispel any doubt, Khan brought in something new to his team at SOM: computer models. Two young programming experts calculated the equations in record time. (Soon after, they left SOM to work on Star Wars.)

Unconvinced by newfangled computers, SOM’s brass insisted on asking outside experts to determine the safety and feasibility of the project. When one recommended a different design—and that it be overseen by a new team—an infuriated Khan issued an ultimatum: Either they let him proceed, or he’d leave the firm.

Khan also needed to soothe investors, who were worried about wind. The building was designed to be pliant, and Khan’s models showed that the skyscraper was 25 percent stronger than what Chicago’s wind code required. But he needed to prove that gusts would be imperceptible on the building’s top floors.

“We were like one architect-engineer,” said design partner Bruce Graham, right, with Khan, above. “The purity of his thinking was what I fell in love with.” (K&S Photographics courtesy SOM)

One Sunday afternoon, Khan took his family to Chicago’s Museum of Science and Industry. There, at a washing machine exhibit sponsored by Maytag, he and his daughter stood on a rotating platform designed to mimic the oscillating motion of a washing machine. When the tub rumbled to life, his daughter flinched—and Khan had an epiphany. He persuaded the museum to let him use the exhibit to stage a motion perception test, asking eight volunteers to stand, sit, or lie down at the base of the empty tub. As the motor rotated the floor, everyone tallied their perceptions of movement. Using that data, Khan ensured the Hancock’s sway would fit into the comfort zone. Shortly after, he got the OK to build.

Chicago is not an easy place to build skyscrapers. Unlike New York City, with its easy-to-reach bedrock, Chicago is swamp and sand. For centuries, it was difficult to walk there. That’s why Chicago built 561 miles of wooden sidewalks in the 19th century—which became the 561 miles of kindling that fueled the Great Chicago Fire of 1871.

None of that stopped the engineers rebuilding Chicago from reaching for new heights. In 1885, they completed the 138-foot-tall Home Insurance Building, the world’s first modern skyscraper. Other steel Goliaths followed. An 1891 New York Times article offered begrudging but skeptical praise about the towers sprouting from the “slimy ooze,” asking, “Who shall restrain the great layer of jelly in Chicago’s cake?”

If Chicago was built on swamp, the site of the John Hancock Center was soup. The area was water until the city dumped ash and debris from the Great Fire there as landfill. In 1886, an eccentric con artist named George Wellington Streeter claimed the land after running his steamboat ashore. (Constables tried to evict him, but Streeter fired buckshot whenever they approached.) The area, now called Streeterville, is home to the deepest bedrock in  Chicago. Khan was building right on top of it.

Khan’s design called for 57 caissons—8-foot-thick concrete columns—to be plunged into the bedrock to support the building’s 46,000-ton steel frame. One of those caissons had to be extended up to 197 feet below the surface, then a world record. But soon after the caissons were put in place, Khan received bad news from his field man at the site: One of the caissons had shifted seven-eighths of an inch: The base of the $100,000,000 building was sinking. Khan immediately called a meeting at the building site, looked at the concrete pillars, and cleared his head.

Khan always had a knack for identifying invisible problems. In Mir M. Ali’s Art of the Skyscraper, a friend of Khan’s relays a story about having lunch with him at engineering college in Calcutta. After the food was served, the friend was about to dive in when Khan asked the waiter to change his plate. “There is a hairline crack in your plate where bacteria may grow,” he explained. The waiter whisked the dish away.

Looking over the Hancock’s groundwork, Khan knew the design wasn’t at fault. It had to be the caissons. He ordered sonic tests to find weak spots and found that the contractors, in an effort to save time and money, had poured concrete while the drills were in place. When they pulled the machinery out, the concrete was still setting. Chicago’s soil had seeped into the gaps, causing the shift.

Crews had to check all the caissons, setting the project back six months. After it was deemed safe, Khan made sure the 100-story building was finished on time—and it only cost as much as a conventional 45-story building. Suddenly, skyscrapers made financial sense again.

There were only minor quibbles about the wind. Employees at the restaurant on the 95th floor noted that bottles in the wine rack clanked. (They moved the wine to the basement, to be fetched via express elevator.) When one woman was upset her chandelier swayed on breezy days, Khan reinforced the fixture himself.

One day, Khan was sitting in the Hancock’s open-air plaza when two women began admiring the building. As his daughter writes, Khan couldn’t help but eavesdrop. “‘The diagonals,’ one woman explained, ‘were placed on the facade with artistic intent by the architect.’” Khan was flattered: His design was so elegant, it could only be explained as an artistic addition.

Upon its completion in 1969, the John Hancock Center was the second-tallest building in the world. Today, it’s the 41st. Every skyscraper ahead of it on the list of the world’s tallest buildings (with the exception of the Empire State Building) is a descendant of Khan’s design. Thanks to the clever structural engineer, who knew that strength comes from flexibility, the skyscraper shed its status as a relic. Today, it is how a city reinvents itself. A growing skyline is a reminder that we will never stop reaching for greater heights.

In 1982, Khan died of a heart attack in Jeddah, Saudi Arabia. Today, construction is underway there on the Jeddah Tower, a skyscraper that, upon its completion in 2020, will become the world’s tallest: 3,307 feet high. Its “buttressed core” evolved from Khan’s tubes. The innovation earned William F. Baker, the engineer behind the concept, one of architecture’s highest honors: the Fazlur Khan Lifetime Achievement Medal.