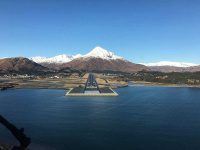 ADOT&PF, the Federal Aviation Administration (FAA) and project consultant HDR developed a plan to extend two federally required runway safety areas by 600 feet into the Gulf of Alaska and use engineered material arresting systems (EMAS) that will stop aircraft from runway overruns and undershoots.

The department then worked with Kiewit Infrastructure West to extend the safety areas and install two EMAS beds. This required creating a land base made up of about 14,000 armor stones, each weighing 12,000 pounds mined from a rock quarry 800 nautical miles away in Wrangell. Each stone was shipped by barge to Kodiak.

In total the project required:

“The entire project delivery team did a remarkable job with this challenging airport project. Kiewit’s careful coordination of material delivery to this remote location and working closely with the airport’s stakeholders, resulted in a superbly orchestrated safety project that will greatly benefit Kodiak and the U.S. Coast Guard Base,” said ADOT&PF Commissioner Marc Luiken.

The project was completed in less than 18 months for $59 million and was funded primarily through the FAA’s Airport Improvement Program. The project also included building new taxiways and service roads to access the extended safety areas, airport lighting systems upgrades and culvert work.

The Alaska Department of Transportation and Public Facilities oversees 249 airports, 11 ferries serving 35 communities, 5,619 miles of highway and 720 public facilities throughout the state of Alaska. The mission of the department is to “Keep Alaska Moving through service and infrastructure.”