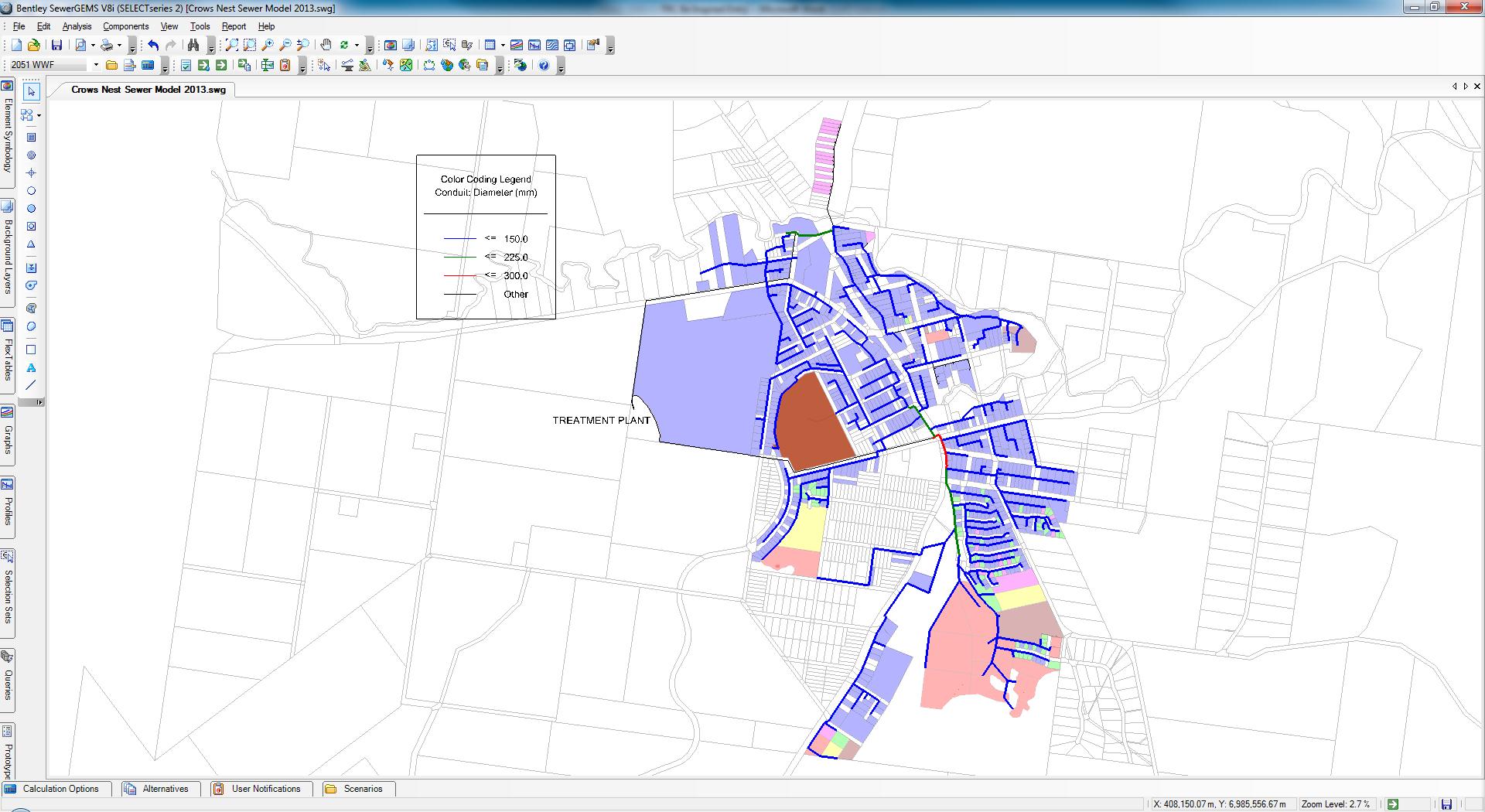 In Queensland, Australia, in 2008, eight local governments were merged into one to form what is now the Toowoomba Regional Council (TRC). This council serves a population of approximately 120,000, and maintains water and wastewater networks totaling 3,200 kilometers in reticulation mains. TRC undertook a study in 2011 focusing on the township of Crows Nest as its flagship for assessing the existing infrastructure and the development of a future sewer system.

The study was designed to identify whether a conventional gravity system would be a more cost-effective option than a pressure sewer system. Consideration of various conditions such as population densities, topographic constraints and the presence of the existing infrastructure were all major factors important to TRC. The need for improved water quality, better-performing sewer systems, and reduced capital costs were the primary objectives, but TRC also had to ensure regulatory requirements were met when choosing the most effective system.

Using Bentley’s SewerGEMS for sanitary and combined sewer modeling and analysis, TRC engineers assessed that AUD 2 million could be saved building a conventional gravity system instead of a pressure sewer system. In a region that is facing catch-up challenges from recent significant flooding and other issues, if correct planning can be implemented via the use of software and some out-ofthe- box thinking, significant cost savings can be realized for the community.

The amalgamation of the eight local governments posed a real challenge for the TRC, specifically how to assess the conditions of the varied sewage assets and networks in the region for the newly adopted township. The conditions of the existing systems varied from underperforming treatment plants to state-of-the-art activated sludge treatment plants. As this was a new assembly of townships, under the governance of the TRC, the wide and varied nature of the infrastructure triggered a comprehensive assessment of the existing assets and networks, as well as the creation of a new system to improve the quality of water, and reduce the effects of sewage overflows and poor effluent quality.

Issues with the Existing System at Crows Nest The first system addressed was a regional system operated by TRC, known as the common effluent drainage (CED) system in the town of Crows Nest, Queensland. The CED system services a population of approximately 1,500 and consists of 24.5 kilometers of sewer mains with five pumping stations. This system was chosen because of its poor track record of effluent issues and wet weather overflows. Located within the catchment of Toowoomba’s largest water supply reservoir, Cressbrook Dam, the CED system at Crows Nest relies on primary treatment at each property and a collection system delivering effluent to final treatment lagoons. This process relied heavily on the property owners to ensure the effluent produced was of acceptable quality.

It was not uncommon to find effluent entering the systems or pumping stations at Crows Nest, which posed a real threat to water quality with an undesirable environmental impact. Another major issue with the CED Crows Nest scheme is regular sewage overflows during wet weather events. The study concluded that there was a compelling need to investigate an alternative to the existing sewer system. 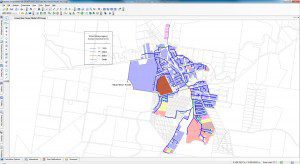 SewerGEMS significantly reduced the model build time from days to a matter of hours, which allowed the council to spend additional time evaluating options.

SewerGEMS was selected to create a preliminary design for future conventional gravity and pressure sewer network options. This software was selected as it was already used in-house, understood by TRC engineers, and very capable of conducting the analysis required. Esri’s ArcMap was used to review the existing CED scheme and identify existing mains that could potentially be used for a future system. These mains were then imported into SewerGEMS using its ModelBuilder tool and a future network was developed around the existing mains. Existing demands were analyzed in ArcMap and then imported into SewerGEMS using its LoadBuilder feature. Elevations were then extracted and assigned to the model nodes using the TRex feature.

Toby Millikan, senior engineer, at Toowoomba Regional Council, explained: “These features in SewerGEMS significantly reduced the model build time from days to a matter of hours, which has allowed the council to spend additional time evaluating alternative sewer options.” By building and analyzing additional scenarios in the SewerGEMS model, the effects of inflow and infiltration were investigated in order to optimize the sizing of the future system. Analyzing the existing infrastructure and the assets in the network could allow for reduced capital costs for the overall project. The User Data Extension feature in SewerGEMS enabled a priority to be assigned to each asset based on the criticality of the asset. The priority was then used as a basis for the staging of the proposed network and will ultimately allow for the dispersal of capital costs across multiple budgets. 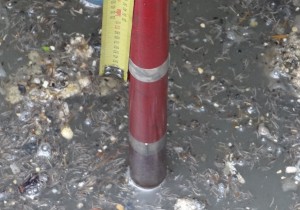 oor quality of effluent in one of the Crows Nests pumping stations.

Assessing the WSAA Requirements of a Pressure System

SewerGEMS was used to validate a formula produced by the Water Services Association of Australia (WSAA) in the Pressure Sewer Code (WSA-07 2007), which details the requirements of a pressure sewer system. The formula itself determines the flows through pressure sewer mains, and was used by SewerGEMS for pipe sizing to provide rationale and calculated decisions for the system chosen after the study. A pressure sewer model was developed for part of Crows Nest, applying demands directly to the wet well using a standard diurnal pattern.

A typical pressure sewer pump was then modeled to distribute flow into the network. Checks were made in various parts of the network to plot flow versus demand and to develop a formula that replicates the model results. The sample study in this situation found that the WSAA formula underestimated the expected flow rates, which would have resulted in an undersized network at Crows Nest. It also showed that flow versus demand was not a linear relationship and required a new relationship to be determined. As a result, the TRC proposed similar studies using SewerGEMS for other locations to validate the authenticity of the new formula.

The sewer model was exported to WaterGEMS to estimate costs using its Darwin Designer functionality. Pump station costs were then added to provide a comparison between the two options for the overall cost of the design and build. In Crows Nest, since trunk infrastructure (including gravity mains and pumping stations) already existed, they could continue to be used in a conventional gravity system. As a result, a preliminary capital cost estimate found that the conventional gravity system could be as much as AUD 2 million less than the pressure sewer system.

The results were contrary to general opinions that assumed that a conventional gravity system would be more costly. SewerGEMS also proved that using the WSAA formula would have undersized the pressure sewer mains (and consequently appear less expensive than it needed to be), which may have affected the recommendation to proceed with the conventional gravity system. Once the new sewer network is constructed, sewer overflows will be minimized or eliminated altogether. This will have significant benefits for the residents of Crows Nest, as well as environmental improvements in terms of water quality in Cressbrook Dam.

Extension of the Study to the Region

Toby Millikan, senior engineer at Toowoomba Regional Council, concluded “The determination of flows through a pressure sewer system was greatly simplified with the use of SewerGEMS. These flow results were then used to develop a formula to apply to the remainder of the network to confidently size the pressure sewer network. This enabled us to make the recommendation that minimizes capital costs while maximizing the network performance.”

Aidan Mercer is a Senior Industry Marketer at Bentley with 6 years’ experience in high-technology environments. Aidan has worked at Bentley Systems since 2010, joining from the Exor, an asset management technology organization. He has held various roles in Geospatial and Utilities and now heads up after industry marketing for Government. He holds a masters in marketing from the University of Gloucestershire and various CIM chartered marketing qualifications. He resides in London, United Kingdom.