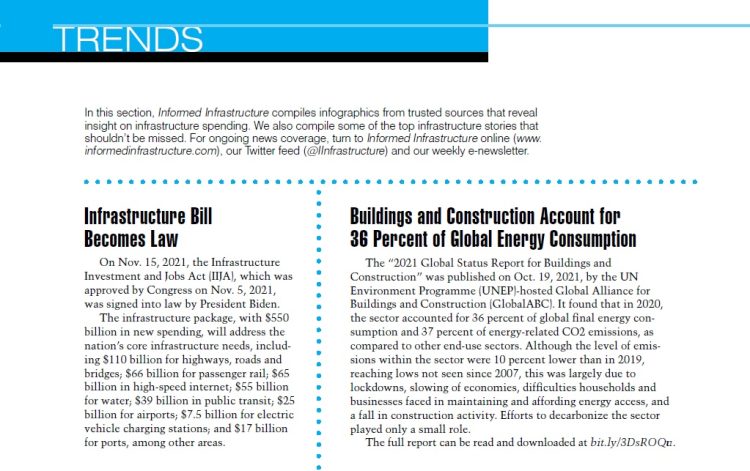 Buildings and Construction Account for 36 Percent of Global Energy Consumption

The “2021 Global Status Report for Buildings and Construction” was published on Oct. 19, 2021, by the UN Environment Programme (UNEP)-hosted Global Alliance for Buildings and Construction (GlobalABC). It found that in 2020, the sector accounted for 36 percent of global final energy consumption and 37 percent of energy-related CO2 emissions, as compared to other end-use sectors. Although the level of emissions within the sector were 10 percent lower than in 2019, reaching lows not seen since 2007, this was largely due to lockdowns, slowing of economies, difficulties households and businesses faced in maintaining and affording energy access, and a fall in construction activity. Efforts to decarbonize the sector played only a small role.

The full report can be read and downloaded at bit.ly/3DsROQu. 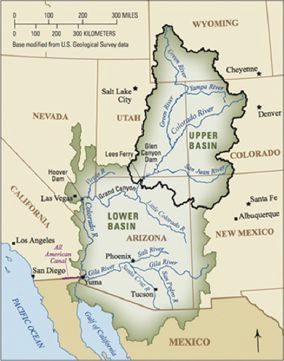 A new study (available at bit.ly/3FpuYtp) projects that a hot and dry future climate may lead to a 29-percent decline in Upper Colorado River Basin “baseflow” at the basin outlet by the 2050s, affecting both people and ecosystems.

Baseflow is the movement of groundwater into streams and, on average, accounts for more than 50 percent of annual streamflow in the Upper Colorado River Basin; it’s vital for sustaining flows in the Colorado River during dry periods. Scientists from the U.S. Geological Survey and the Bureau of Reclamation modeled temperature, precipitation and runoff data to understand more about how baseflow may change under three future climate scenarios.

Infrastructure on the Brink

The third national risk assessment from the nonprofit First Street Foundation, “Infrastructure on the Brink,” highlighted cities and counties across the continental United States whose residential properties, roads, commercial properties, critical infrastructure and social infrastructure face operational flood risk today, and how that risk is increasing during the next 30 years with a changing environment that will worsen the situation.

According to the report, about 2 million miles of road currently are at risk of becoming “impassable” due to flooding; nearly 1 million commercial properties, 17 percent of all social infrastructure facilities, and 12.4 million residential properties also have “operational risk”; and, during the next 30 years, about 1.2 million residential properties and 2,000 pieces of critical infrastructure (airports, hospitals, fire stations, hazardous waste sites and power plants) also will be at risk of becoming inoperable due to flooding from sea-level rise and/or heavy rainfall.