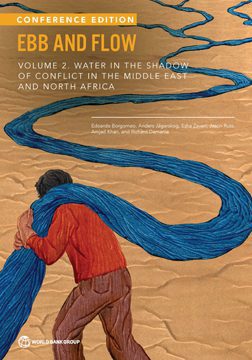 In Middle East and North Africa, the Region with the Highest Levels of Forced Displacement, Water Resilience is Key to Long-Term Growth

WASHINGTON— As climate change accelerates a global water crisis, rainfall variability is expected to be one of the contributing forces in migration, according to a new World Bank report released today. The report anticipates that the world’s cities, which receive migrants and are now home to 55% of the global population, will face a rising number of “day-zero” events – when taps run dry.

The report, Ebb and Flow, provides the first-ever global assessment of the impact of water on migration. It is based on analysis of the largest data set on internal migration ever assembled, covering nearly half a billion people from 189 population censuses in 64 countries, and several national and global data sets that have been combined for the first time. In the Middle East and North Africa (MENA), where 60 percent of the population lives in water-stressed areas, the report notes that water is already one of the main vulnerabilities faced by people living in the region, particularly those displaced by conflicts and their host communities.

The report finds that water deficits are linked to 10 percent of the increase in total migration within countries between 1970 and 2000. By the end of this century, worsening droughts are projected to affect about 700 million people. These climate shocks will have a disproportionate impact on the developing world, with more than 85 percent of people affected living in low- or middle-income countries. Yet it is often the poor who cannot afford to leave. The report finds that residents of poor countries are four times less likely to move than residents of wealthier countries.

Globally, water shocks affect not only the number of people who move, but also the skills they bring with them. Migrants who leave regions with lower rainfall and frequent drought usually possess lower educational levels and skills than other migrant workers, implying significantly lower wages and less access to basic services at their destination. This raises important policy implications for receiving cities.

“As the fight against the COVID-19 pandemic continues, climate change is fueling water challenges around the world, which will hit developing countries hardest”, said Mari Pangestu, the World Bank Managing Director for Development Policy and Partnerships. “In cities receiving migrants from rural areas due to rainfall variability, it pays to prevent such crises in an integrated way, to support green, resilient and inclusive development.”

Cities are also facing an increasing number of day-zero events, where they risk running out of water. Alongside recent acute water shortages in Cape Town, South Africa; Chennai, India; São Paolo, Brazil; and Basra, Iraq, dozens of smaller cities contend with similar events, but do not make international headlines. This underlines the need to preserve and sustainably manage water resources.

Policies and infrastructure needed to build water resilience are expensive, but a drought is far more costly, potentially reducing a city’s economic growth by up to 12 percent. The report highlights ways cities can tackle these challenges, such as reducing water demand, recycling wastewater, harvesting storm water, and redesigning urban areas to resemble sponges that soak up water and store it below ground.

Water security is key to post-conflict reconstruction in MENA

In the MENA region, war, conflict, and unemployment are more influential drivers of migration than events related to water, such as drought. As the effects of climate change intensify, however, these historical patterns may no longer hold. In areas that lack good governance, climate change could exacerbate vulnerabilities and create tensions over water resources, leading to a vicious cycle of water insecurity and fragility.

Water insecurity is felt most acutely by the millions of forcibly displaced and their host communities. The MENA region has the world’s highest levels of forced displacement, with an estimated 7.6 million refugees, of whom 2.7 million are hosted in the region, and 12.4 million internally displaced people fleeing protracted conflicts.

Water is more often a victim – rather than a primary source – of conflict. Using data from Duke University’s Targeting of Infrastructure in the Middle East (TIME) database, the report finds that, since 2011, there have been at least 180 instances in which water infrastructure was targeted in conflicts in Gaza, Yemen, Syria, and Libya, leaving hundreds of thousands without access to water.

According to the report findings, steps to build water security are urgently needed within the MENA region. The protracted displacement crisis and water scarcity underline the need to continue to build off of humanitarian interventions and improve policies that promote long-term water security and resilience to shocks.

“As the world’s most water-scarce region, access to water is a daily struggle for millions of people in the MENA region, particularly the most vulnerable. The region also faces the greatest expected economic losses from climate-related water scarcity – estimated at between 6 percent and 14 percent by 2050,” said Ferid Belhaj, World Bank Vice President for the Middle East and North Africa. “Ensuring that water is part of the broader humanitarian-development policy discussion and plans is vital for stabilizing economies, rebuilding livelihoods, and forging a green, resilient, and inclusive future for all.”

The report notes that policy makers will need to make trade-offs between short-term, uncoordinated measures to respond to immediate water needs, and long-term measures needed to address structural water issues. Recognizing and managing these trade-offs will help ensure that water risks do not undermine progress toward a sustainable recovery in the MENA region.

Note: The report was funded in part by the Global Water Security & Sanitation Partnership, a Multi-Donor Trust Fund based at the World Bank’s Water Global Practice.

Since the start of the COVID-19 pandemic, the World Bank Group has deployed over $157 billion to fight the health, economic, and social impacts of the pandemic, the fastest and largest crisis response in its history. The financing is helping more than 100 countries strengthen pandemic preparedness, protect the poor and jobs, and jump start a climate-friendly recovery. The Bank is also supporting over 50 low- and middle-income countries, more than half of which are in Africa, with the purchase and deployment of COVID-19 vaccines, and is making available $20 billion in financing for this purpose until the end of 2022