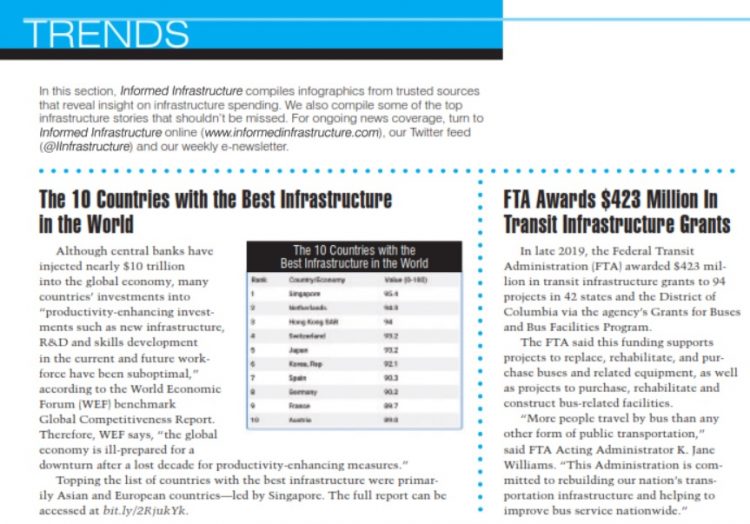 The 10 Countries with the Best Infrastructure in the World

Although central banks have injected nearly $10 trillion into the global economy, many countries’ investments into “productivity-enhancing investments such as new infrastructure, R&D and skills development in the current and future workforce have been suboptimal,” according to the World Economic Forum (WEF) benchmark Global Competitiveness Report. Therefore, WEF says, “the global economy is ill-prepared for a downturn after a lost decade for productivity-enhancing measures.”

Topping the list of countries with the best infrastructure were primarily Asian and European countries—led by Singapore. The full report can be accessed at bit.ly/2RjukYk. 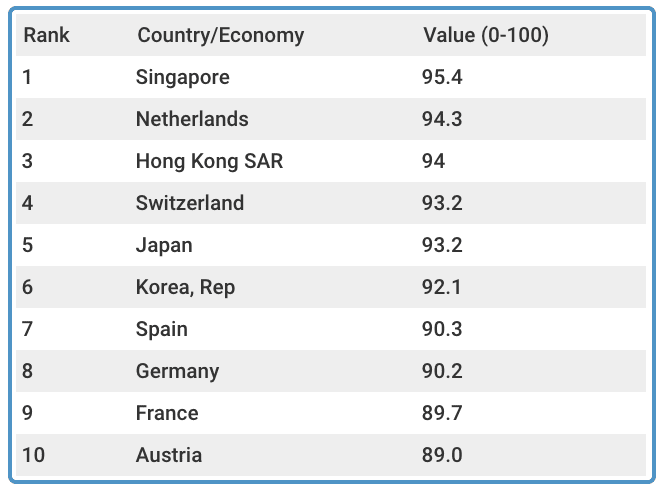 In late 2019, the Federal Transit Administration (FTA) awarded $423 million in transit infrastructure grants to 94 projects in 42 states and the District of Columbia via the agency’s Grants for Buses and Bus Facilities Program.

“More people travel by bus than any other form of public transportation,” said FTA Acting Administrator K. Jane Williams. “This Administration is committed to rebuilding our nation’s transportation infrastructure and helping to improve bus service nationwide.”

• Video: Secrets of the Parthenon

• Microbes for Hire: Snapshots of Bionetix Natural Wastewater Solutions Around the Globe

• Flexible, Adaptable, Strong, Easy to Work with, ACH Foam Technologies’ Molded Polystyrene Foam Is Unlike Anything Else

• Engineers Mull Cause of Bridge Collapse

A new year always brings a new crop of forecasts, reports and predictions for the coming year. This subsection summarizes a few of the reports that recently came out concerning the infrastructure markets.

The U.S. transportation infrastructure market is expected to grow at least 5 percent in 2020, according to the annual economic forecast released by the American Road & Transportation Builders Association (ARTBA).

“The real market growth for 2020 is being fueled by increased transportation investments from federal, state and local governments,” said ARTBA Chief Economist Dr. Alison Premo Black, who conducted the analysis.

Total domestic transportation construction and related-market activity in 2020 should reach $300.4 billion, up from 2019’s $286.5 billion, after adjusting for project costs and inflation.

The transportation construction market grew by 8 percent in 2019 compared to 2018, driven largely by gains in highway, street and pavement work, which grew by $9.6 billion to $73.1 billion.

ARTBA’s forecast is based on a series of proprietary econometric models for each mode as well as analysis of federal, state and local data and market intelligence. The full forecast can be purchased at www.artbastore.org.

Global Spending in Construction to Reach $17.5 Trillion by 2030

According to Frost & Sullivan’s recent analysis, “Future of Construction, Global, 2030,” the construction industry is in the middle of a transition toward new business models that are technology- and data-driven, better collaboration among stakeholders, and higher productivity. The increasingly aging workforce and digitization are prompting greater investments in workforce management and digital solutions.

By 2030, global spending in construction is expected to touch $17.5 trillion, with China, the United States and India leading the way and accounting for 57 percent of all global growth. More than 60 percent of the global infrastructure investment will be in emerging economies, particularly Asia, while the United States and Canada will contribute almost 20 percent.

“Technological advancements in Artificial Intelligence (AI), cloud software, drones, and pre-fab construction will be leveraged to reduce cost and improve quality and speed of construction,” said Chaitanya Habib, Visionary Innovation Research Consultant at Frost & Sullivan. “Smart infrastructure technologies embedded with telematics, too, will influence the future of the industry by creating an intelligent and on-demand system that reduces operational costs and augments productivity.”

Thunderbird School of Global Management released a new report projecting that the world can realize at least $1 trillion – $3 trillion in market opportunities and $3 trillion – $5 trillion in broader economic, social and environmental benefits per year by 2030.

Thunderbird’s Director-General and Dean, Dr. Sanjeev Khagram, authored the new report and shared it at a cross-sectoral gathering hosted by Thunderbird with the Foundation for Climate Restoration in Davos, Switzerland, during the World Economic Forum’s 2020 annual meeting.

“Together, we must rapidly deploy natural and technological solutions to remove gigatons of carbon dioxide from our air, restore ocean ecosystems, and preserve Arctic ice, while dramatically reducing emissions and adapting to climate change impacts,” said Dr. Khagram. “Climate restoration is the critical third pillar of climate action alongside climate mitigation and adaptation.”

Find the full report at bit.ly/36ebvKk.

Volume growth remains favorable for U.S. airports, ports and toll roads, and will remain largely tethered to U.S. GDP movement, which Fitch projects will fall below 2 percent for 2020. That said, “some softness in growth may take hold to the extent issuers are exposed to global economic markets and protectionist trade policies,” said Senior Director Scott Zuchorski.

Likely to pace volume growth will be U.S. airports, with Fitch projecting 2-3 percent thanks to continued healthy demand for travel. Passenger traffic also will remain healthy for both large- and small-hub airports following a spike in 2019.

The full report is available at www.fitchratings.com.

Comments are disabled
NEXT ARTICLE
ReEngineering the Engineer: Do You Have a ‘Plan B’ for the Totally Unexpected?
January 27, 2020
PREVIOUS ARTICLE
Trelleborg to showcase no-dig repair solutions at WWETT 2020
January 24, 2020