Engineers Mull Cause of Bridge Collapse 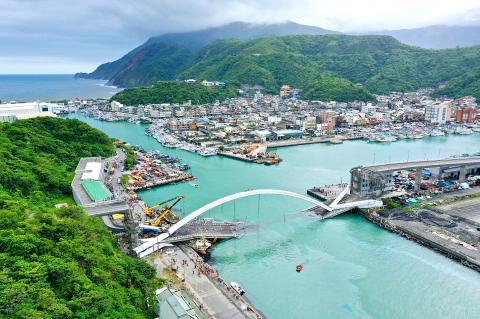 The Nanfangao Bridge in Yilan County’s Suao Township is pictured after the bridge collapsed yesterday morning.

Yesterday’s collapse of the Nanfangao Bridge (南方澳橋) in Yilan County might have been due to rusted anchoring points, Taipei Technology College of Engineering dean Sung Yu-chi (宋裕祺) said.

Video footage showed that the vertical cable at the center of the bridge’s steel arch was the first to snap, Sung said. However, the bridge is suspended by 10 or more steel cables and theoretically, the other cables should have been capable of evenly distributing the weight the broken cable had borne, he said.

However, it looks like the snapping of the vertical cable caused a domino effect, Sung said. The bridge was continuously exposed to salty air, which would have rusted the cables, reducing the amount of weight the span could support; long-term exposure to wind could have also loosened the anchor points, making them unable to sustain the bridge’s weight, he added.