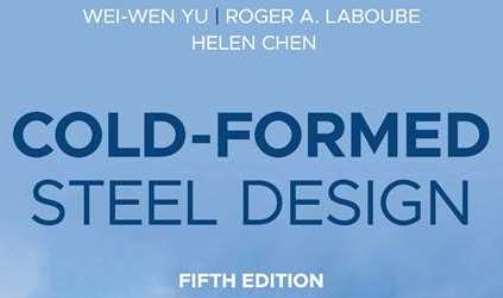 WASHINGTON, D.C. – The American Iron and Steel Institute (AISI) and the Wei-Wen Yu Center for Cold-Formed Steel Structures (CCFSS) at the Missouri University of Science and Technology announce the publication of “Cold-Formed Steel Design – Fifth Edition,” recognized by professionals around the world as the definitive text on cold-formed steel design. The book was updated by Wei-Wen Yu, Ph.D., P.E. and Roger A. LaBoube, Ph.D., P.E., from CCFSS and Helen Chen, Ph.D., P.E., from AISI. It includes the most important developments in cold-formed steel design theory and practice.

The Center for Cold-Formed Steel Structures was established at the University of Missouri-Rolla (now Missouri University of Science and Technology) in May 1990 under an initial grant received from the American Iron and Steel Institute. In 2000, the Center was renamed for its Founding Director, Dr. Wei-Wen Yu. The mission of the Center is to provide an integrated approach for handling research, teaching, engineering education, technical services, and professional activity. The Center brings together the technical resources of interested parties such as university researchers, steel producers, product manufacturers, consultants, building officials, government agencies, and others with a common goal of continued improvement of cold-formed steel design and construction. To learn more about CCFSS, visit http://ccfssonline.org/.

AISI serves as the voice of the North American steel industry in the public policy arena and advances the case for steel in the marketplace as the preferred material of choice. AISI also plays a lead role in the development and application of new steels and steelmaking technology. AISI is comprised of 18 member companies, including integrated and electric furnace steelmakers, and approximately 120 associate members who are suppliers to or customers of the steel industry. AISI’s codes and standards work is conducted under the Construction Market Council of AISI. For more news about steel and its applications, view AISI’s website at www.steel.org. Follow AISI on Facebook or Twitter (@AISISteel) or AISI Construction (@BuildUsingSteel).