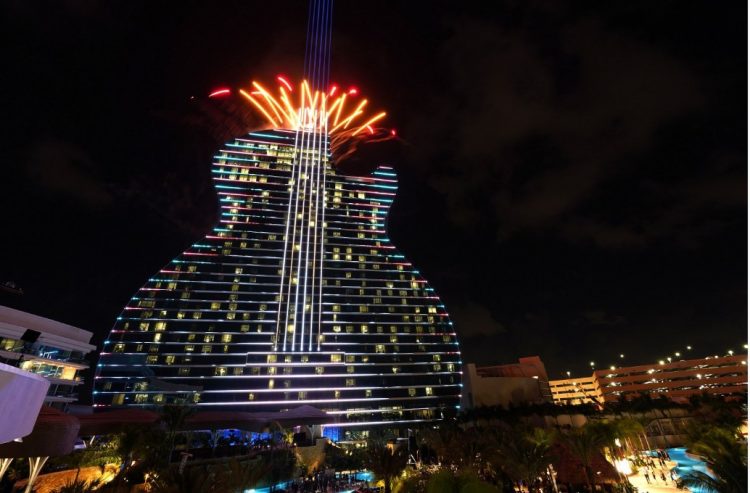 DeSimone Consulting Engineers is excited to announce that construction is now complete at The Seminole Hard Rock Hotel & Casino in Hollywood, Florida. Designed in collaboration with Klai Juba Wald Architects, the guitar-shaped building stands 35 stories above ground and includes 638 rooms and suites, in addition to a 41,000-square-foot spa and several restaurants. The neck of the guitar extends 75 feet above the roof with light cannons blazing through.

The hotel originally opened its doors in 2004 and quickly became one of South Florida’s premier resort and entertainment destinations. In 2013, the Seminole Tribe of Florida commissioned a 2.3-million-square-foot expansion valued at around $1.8 billion. This included the construction of the world’s only guitar-shaped hotel building which began foundations in May 2017 and was topped-out in July 2018.

The expansion also includes the construction of the Pool Tower, an 8-story concrete structure that contains a luxury, 168-key hotel set above a private cabana area. A new, three-story building sits adjacent to the casino and will contain dining areas and retail. The resort’s 10-acre, lagoon-style pool was envisioned as an oasis for hotel guests and visitors with designs inspired by Bora Bora. Private cabanas appear to float in the center of the pool and offer an experience unlike any other in Florida.

The guitar tower is constructed using nine-inch thick, post-tensioned slabs on levels four through 28. The post-tensioned system allowed for thinner floor plates which facilitated the curtain wall installation and the guitar-shaped design. Even with the thinner post-tensioned slabs, the connection between the curved curtain wall and the slab edges posed several challenges as the slabs were constructed. The curtain wall embeds had to be precisely located on the slab edge and any conflicts with the structure required time-consuming, often costly resolutions. If a reinforced concrete slab was used instead, the added thickness would have conflicted with the curve of the glass and the intended shape may not have been achievable.

DeSimone team had to uniquely design the slabs to resist the thrust forces produced by the slope of the extreme-most columns. Depending on the floor and the direction of the slope, the columns created either a tensile or compressive force in the slab. Additional reinforcing and shear studs were provided in the slabs to resist these forces. The slab was also reinforced as part of the lateral system. This allowed for thinner shear walls and a large shear wall opening at the lobby.

The most significant construction challenge involved the timing of the project. The guitar tower was topped-off just over a year after the foundations were poured, and each slab was constructed within a matter of days.

Simplicity was the key solution to mitigating the project’s accelerated timeline. At the floor plates, only the end bays varied floor-to-floor. The cables and the reinforcing did not vary significantly. The post-tensioned concrete slabs enabled rapid construction as the slabs achieved adequate, load-supporting strength quickly. The simplicity of the floor also proved to be a cost-effective solution. 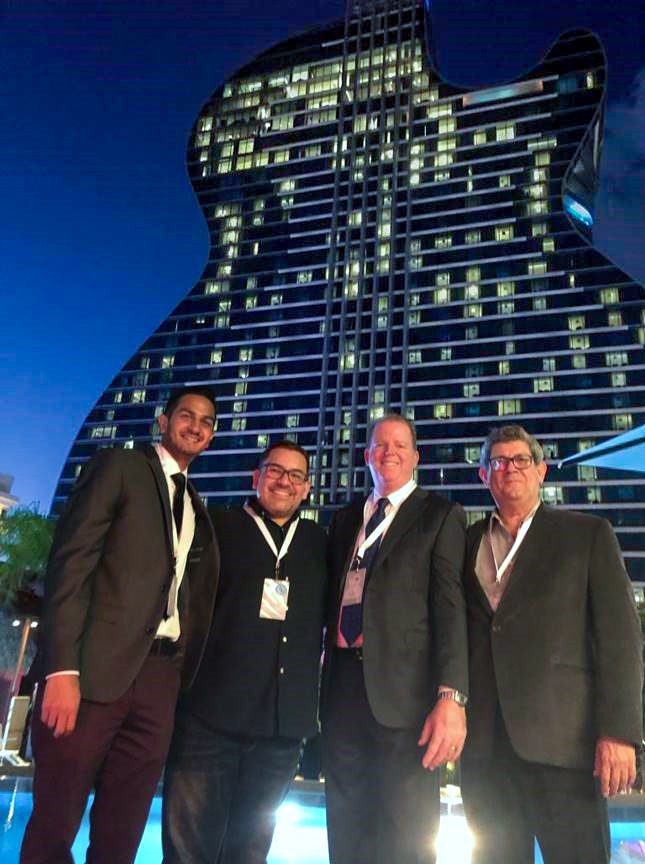 Founded in New York City in 1969, DeSimone Consulting Engineers provides high-quality structural engineering, facade consulting, forensic services, and risk management and construction claims consulting for all types of buildings. With offices in the United States, South America, and the Middle East, DeSimone is known for providing each client with personal, dedicated, and inspiring engineering solutions. To date, DeSimone has designed over 10,000 projects in 44 states and 54 countries.