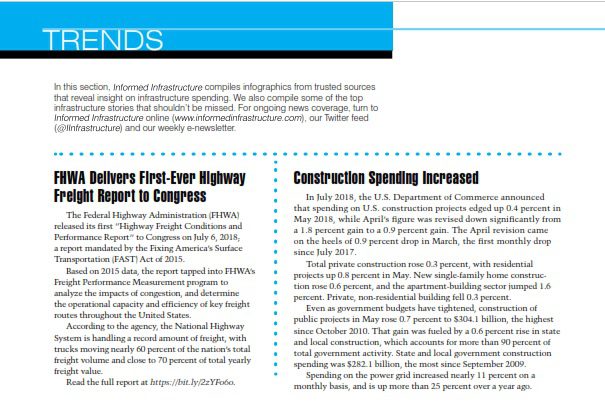 The Federal Highway Administration (FHWA) released its first “Highway Freight Conditions and Performance Report” to Congress on July 6, 2018; a report mandated by the Fixing America’s Surface Transportation (FAST) Act of 2015.

Based on 2015 data, the report tapped into FHWA’s Freight Performance Measurement program to analyze the impacts of congestion, and determine the operational capacity and efficiency of key freight routes throughout the United States.

According to the agency, the National Highway System is handling a record amount of freight, with trucks moving nearly 60 percent of the nation’s total freight volume and close to 70 percent of total yearly freight value.

Read the full report at https://bit.ly/2zYFo6o.

In July 2018, the U.S. Department of Commerce announced that spending on U.S. construction projects edged up 0.4 percent in May 2018, while April’s figure was revised down significantly from a 1.8 percent gain to a 0.9 percent gain. The April revision came on the heels of 0.9 percent drop in March, the first monthly drop since July 2017.

Spending on the power grid increased nearly 11 percent on a monthly basis, and is up more than 25 percent over a year ago.

• High-Strength Concrete Developed at MSU Could Save State Money, Time

• Nutrient Recovery Systems Market to Grow at 20% Until 2022

Comments are disabled
NEXT ARTICLE
ReEngineering the Engineer: To Fail or Not to Fail?
August 2, 2018
PREVIOUS ARTICLE
WSP to Acquire Louis Berger, a US-based International Professional Services Firm
August 2, 2018