High-strength Concrete Developed at MSU Could Save State Money, Time 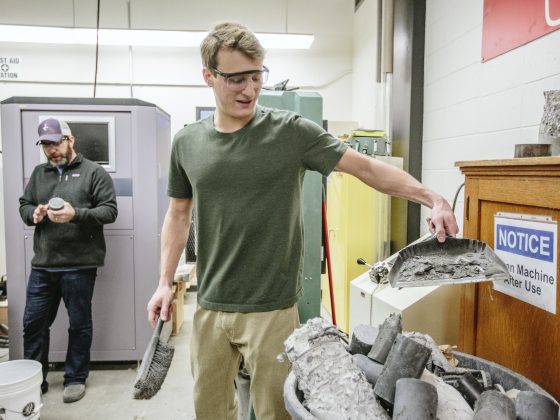 BOZEMAN – In a lab at Montana State University, researchers use massive hydraulic pistons to crush samples of concrete in order to determine the material’s strength. To test what’s called ultra-high performance concrete, they’ve had to ratchet up the force.

“One little square inch of this concrete will carry about 20,000 pounds,” said Michael Berry, a professor in the Department of Civil Engineering. That’s about five times stronger than regular concrete, he said.

During the past two years, Berry and his team have used the hydraulic crushers and a variety of other tools at MSU to fine-tune a recipe for the material, which could soon be widely used in Montana’s bridges and other roadway structures.

The material’s strength and rapid cure time — as little as a day, compared to upwards of a week for regular concrete — open up new construction possibilities that could save Montana Department of Transportation time and money, according to Matthew Needham, the department’s materials testing supervisor.

For instance, ultra-high performance concrete can be used to join together pre-fabricated panels of regular concrete to form the driving surface of bridges, reducing construction time, Needham said. In the long run, the material’s durability could significantly reduce maintenance costs, he added. 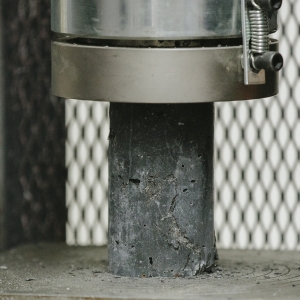 A sample of ultra-high performance concrete is crushed at MSU. MSU Photo by Adrian Sanchez-Gonzalez.

A few recent bridge projects in the state have incorporated proprietary mixtures of ultra-high performance concrete that Montana Department of Transportation has purchased, Needham said. But widespread use has been prohibited by the high cost — as much as 20 times that of regular concrete — that companies charge for the product, he said.

That’s why Montana Department of Transportation asked Berry if MSU’s Norm Asbjornson College of Engineering could help formulate a non-proprietary, affordable version of the material — akin to the generic or store-brand varieties of some products.

“There’s nothing really magic about it,” Berry said of the material, which derives its strength from fine particles of silica fume — a byproduct of making silicon for solar panels and other things — and fly ash, which is a byproduct of coal-fired power plants. The particles fill in tiny voids surrounding the larger particles in the concrete, creating a dense mixture. Polymers added to the mixture allow it to flow with less added water, while needle-like filaments of steel bond the otherwise brittle product together once it has cured.

“There are a handful of states that are looking into making this stuff themselves,” Berry said. “We’re up in front.” 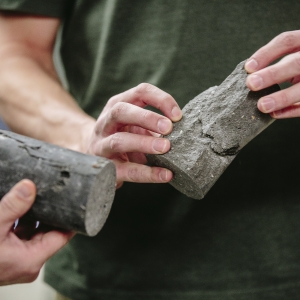 After experimenting with different mixtures using locally sourced materials, Berry’s team, in partnership with the Western Transportation Institute at MSU, published a report in December that recommended ways for the Montana Department of Transportation to formulate the special concrete.

Needham said he was pleased that the researchers found ways to make the material for less than half the cost of purchasing the proprietary product. “I was surprised,” he said.

Riley Scherr, a senior from Rapid City, South Dakota, who is majoring in civil engineering, will continue working in Berry’s lab to test the strength of the concrete samples up to a year after they are poured. He uses a device in the lab to bathe some samples in water and de-icing solution and then freeze and thaw them hundreds of times, simulating the wear and tear of the roadway environment.

Meanwhile, civil engineering master’s student Camylle Wood of Kalispell is helping with the next phase of the project, which will explore how to scale up the mixing process so that large quantities of the concrete can be produced for construction.

“That’s what matters at the end of the day,” she said.