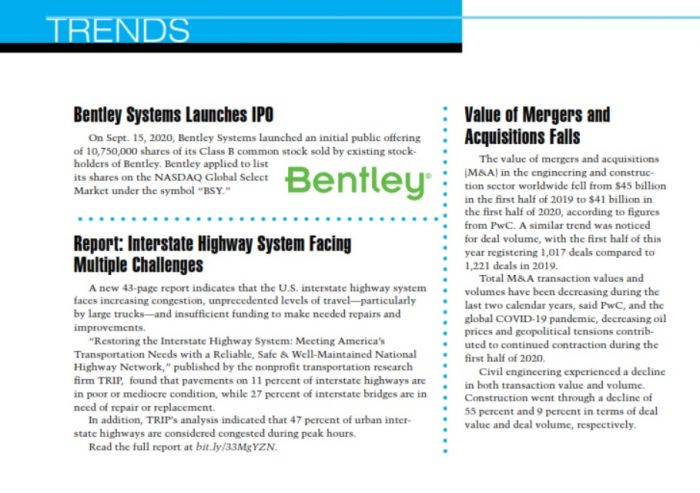 The FHWA issued $5 million in ER funds to the Oregon Department of Transportation to cope with damage caused by several large wildfires that started earlier in the month.

Meanwhile, the FHWA issued $1.3 million in ER funds to help the Bureau of Land Management and the U.S. Forest Service repair several bridges and a section of trail damaged by wildfires in California’s Lassen National Forest.

On Sept. 15, 2020, Bentley Systems launched an initial public offering of 10,750,000 shares of its Class B common stock sold by existing stockholders of Bentley. Bentley applied to list its shares on the NASDAQ Global Select Market under the symbol “BSY.”

“Restoring the Interstate Highway System: Meeting America’s Transportation Needs with a Reliable, Safe & Well-Maintained National Highway Network,” published by the nonprofit transportation research firm TRIP, found that pavements on 11 percent of interstate highways are in poor or mediocre condition, while 27 percent of interstate bridges are in need of repair or replacement.

Read the full report at bit.ly/33MgYZN.

Value of Mergers and Acquisitions Falls

Total M&A transaction values and volumes have been decreasing during the last two calendar years, said PwC, and the global COVID-19 pandemic, decreasing oil prices and geopolitical tensions contributed to continued contraction during the first half of 2020.

Civil engineering experienced a decline in both transaction value and volume. Construction went through a decline of 55 percent and 9 percent in terms of deal value and deal volume, respectively.