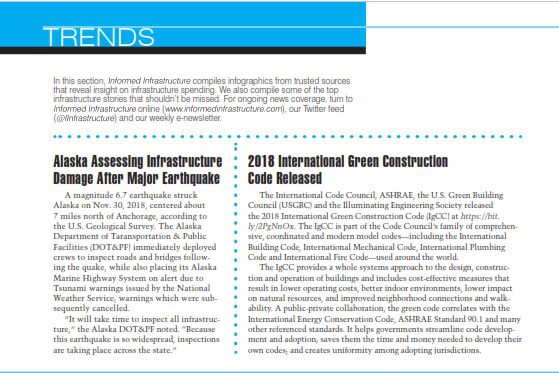 A magnitude 6.7 earthquake struck Alaska on Nov. 30, 2018, centered about 7 miles north of Anchorage, according to the U.S. Geological Survey. The Alaska Department of Taransportation & Public Facilities (DOT&PF) immediately deployed crews to inspect roads and bridges following the quake, while also placing its Alaska Marine Highway System on alert due to Tsunami warnings issued by the National Weather Service; warnings which were subsequently cancelled.

“It will take time to inspect all infrastructure,” the Alaska DOT&PF noted. “Because this earthquake is so widespread, inspections are taking place across the state.”

The IgCC provides a whole systems approach to the design, construction and operation of buildings and includes cost-effective measures that result in lower operating costs, better indoor environments, lower impact on natural resources, and improved neighborhood connections and walkability. A public-private collaboration, the green code correlates with the International Energy Conservation Code, ASHRAE Standard 90.1 and many other referenced standards. It helps governments streamline code development and adoption; saves them the time and money needed to develop their own codes; and creates uniformity among adopting jurisdictions.

Dodge Data & Analytics released its 2019 Dodge Construction Outlook, which predicts that total U.S. construction starts for 2019 will be $808 billion, staying essentially even with the $807 billion estimated for 2018.

“Over the past three years, the expansion for the U.S. construction industry has shown deceleration in its rate of growth, a pattern that typically takes place as an expansion matures,” stated Robert A. Murray, chief economist for Dodge Data & Analytics. “After advancing 11% to 14% each year from 2012 through 2015, total construction starts climbed 7% in both 2016 and 2017, and a 3% increase is estimated for 2018. There are, of course, mounting headwinds affecting construction, namely rising interest rates and higher material costs, but for now these have been balanced by the stronger growth for the U.S. economy, some easing of bank lending standards, still-healthy market fundamentals for commercial real estate, and greater state financing for school construction and enhanced federal funding for public works.”

According to the report, “an important question going into 2019 is whether deceleration is followed by a period of high-level stability or a period of decline. For 2019, it’s expected that growth for the U.S. economy won’t be quite as strong as what’s taking place in 2018, as the benefits of tax cuts begin to wane.”

New research from a CII/Pankow study shows that America’s design-build projects continue to deliver faster, and with greater reliability in cost and schedule performance, than other delivery methods. According to the report, projects using Design-Build (DB) cost 1.9% less per square foot, on average, when compared to Construction Manager at Risk (CMR) and 0.3% less when compared to Design-Bid-Build (DBB). DB projects also average 2.4% less cost growth than a comparably scoped project using CMR and 3.8% less cost growth than a project using DBB.

Renewable Energy in the United States

An infographic focuses on U.S. data for wind, solar and hydro, highlighting renewable energy production as well as the most-recent data for capacity growth. 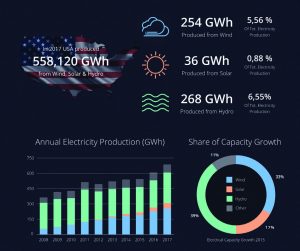 • A New Brick Could Eliminate Insulation

• Video: Large-Scale 3D Printing by a Team of Mobile Robots