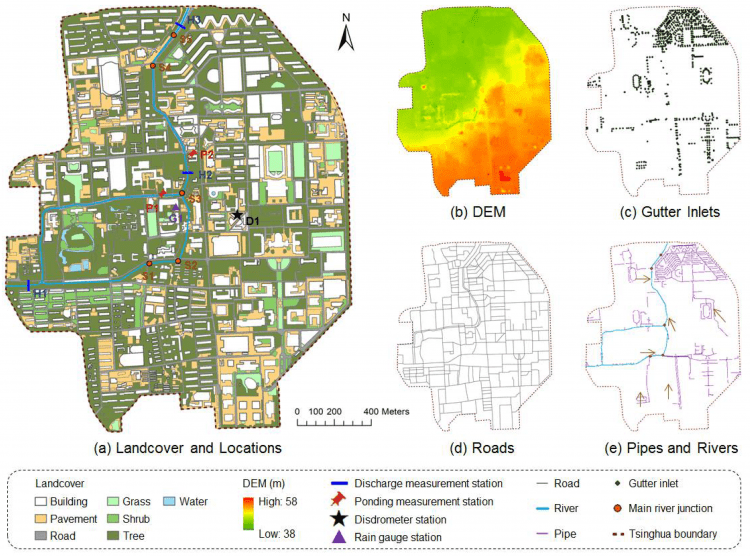 A Chinese study examines how variability in rainfall over time affects hydrological processes and what that means for urban flood control. Among other things, results indicate that peak flooding is affected by temporal resolution of rainfall, while volume typically remains unaffected.

Rainfall exhibits substantial variability, and its temporal resolution considerably affects simulation of hydrological processes. This study aims to investigate the effect of the temporal resolution of rainfall (TRR) on urban flood modeling and to explore how high TRR is required. A routing-enhanced detailed urban stormwater (REDUS) model, which has four layers and accounts for complex urban flow paths, was developed and then applied to the campus of Tsinghua University, Beijing, China. For 30 rainfall events at 1-min resolution, the rainfall accuracy index (RAI) was used to describe the discrepancy of rainfall patterns by upscaling. Through hydrodynamic modelling, the effect of TRR was quantified by the relative error of flood volume and peak in typical areas. The results show that (1) flood peak is sensitive to TRR while flood volume is generally not; (2) with lower TRR, discharge peak is underestimated, and a power function is proposed to express the relationship between the effect of TRR and the characteristics of rainfall and underlying surfaces; and (3) rainfall data of 5-min resolution for urban areas smaller than 1 km2, or at least 15-min resolution for larger areas, are required to constrain the relative biases of flood peak within 10%.