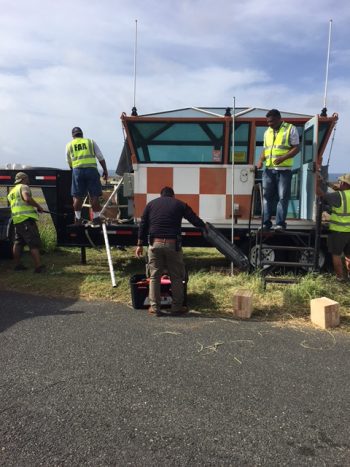 A great deal of news and information about the hurricanes that hit the United States in 2017 has been published in Informed Infrastructure and across countless other media outlets. The following is a very brief summary of a few of those stories:

Zekelman Industries, a steel pipe and tube manufacturer, is supporting the American Red Cross efforts for relief for those impacted by Hurricane Harvey and Irma. The company will match donations by its employees, suppliers and customers up to $250,000. Visit this website to donate: www.crowdrise.com/o/en/team/zekelman-industries-hurricane-harvey-relief-support. In the wake of Hurricane Irma’s destructive path through the Caribbean, the Federal Aviation Administration (FAA) is supporting storm-recovery efforts in the U.S. Virgin Islands with a fully staffed mobile air-traffic-control tower at Cyril E. King International Airport in St. Thomas. The existing tower was badly damaged by the storm, and controllers were managing air traffic from a tent on the airfield for several days before the mobile tower arrived.

A new HNTB survey finds higher taxes and tolls have powerful support when revenues are guaranteed for infrastructure. Public-private partnerships are seen as part of the solution. Trump had announced in a July 19, 2017, executive order that he would create the advisory group, saying the council would study the scope and effectiveness of federal infrastructure funding as well as the support and delivery of infrastructure projects. Its focus was to include transportation projects and extend to other sectors including renewable energy, electricity transmission, broadband and pipelines.

However, Bloomberg, which first reported news of its cancellation, also noted that Trump had not yet formally appointed anyone to serve on it.

• Video: Watch the Rise of 56 Leonard with EarthCam’s Time-Lapse

• USDOT Re-Solicits for Most 2017 FAST Act Grant Funds, Combines with 2018 Round

• Big Data, Sludge and Privatisation: Outlook for Water Until 2022