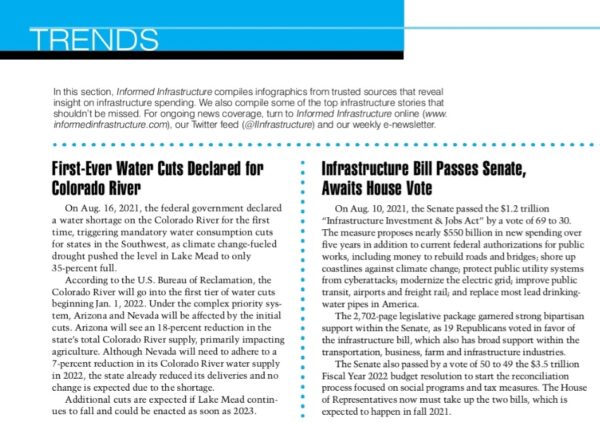 On Aug. 16, 2021, the federal government declared a water shortage on the Colorado River for the first time, triggering mandatory water consumption cuts for states in the Southwest, as climate change-fueled drought pushed the level in Lake Mead to only
35-percent full.

According to the U.S. Bureau of Reclamation, the Colorado River will go into the first tier of water cuts beginning Jan. 1, 2022. Under the complex priority system, Arizona and Nevada will be affected by the initial cuts. Arizona will see an 18-percent reduction in the state’s total Colorado River supply, primarily impacting agriculture. Although Nevada will need to adhere to a 7-percent reduction in its Colorado River water supply in 2022, the state already reduced its deliveries and no change is expected due to the shortage.

Additional cuts are expected if Lake Mead continues to fall and could be enacted as soon as 2023.

On Aug. 10, 2021, the Senate passed the $1.2 trillion “Infrastructure Investment & Jobs Act” by a vote of 69 to 30. The measure proposes nearly $550 billion in new spending over five years in addition to current federal authorizations for public works, including money to rebuild roads and bridges; shore up coastlines against climate change; protect public utility systems from cyberattacks; modernize the electric grid; improve public transit, airports and freight rail; and replace most lead drinking-water pipes in America.

The Senate also passed by a vote of 50 to 49 the $3.5 trillion Fiscal Year 2022 budget resolution to start the reconciliation process focused on social programs and tax measures. The House of Representatives now must take up the two bills, which is expected to happen in fall 2021.

TRB Calls to Include Resilience In Project Benefit-Cost Analysis

A new report issued by the Transportation Research Board (TRB) calls on the U.S. Department of Transportation to include resilience factors within the benefit-cost analysis for infrastructure project justifications.

“Investing in Transportation Resilience: A Framework for Informed Choices” (available at bit.ly/3B4f0CW) also recommends resilience be measured and assessed using an “analytic framework” that incorporates detailed inventories of existing and planned assets, such as roads, runways, bridges, docks and rail lines. It also seeks to include resilience within assessments of the characteristics and likelihood of future natural hazards, along with predictions of the vulnerability of the assets and their critical functions to those hazards.

“Storms, floods, droughts and other natural hazards are combining with sea-level rise and other effects of climate change to disrupt the functioning of the nation’s transportations systems,” said report author Joseph Schofer, professor of civil and environmental engineering and associate dean at Northwestern University, in a statement. “Investing in resilience will require us to make carefully considered choices about how we spend money today to generate benefits that may not be realized until long into the future.”

The Noble collective of energy companies agreed to pay $1 million and implement enhanced containment measures and electronic sensors at tank batteries operating in Colorado floodplains. The settlement requires installation of steel oil-spill containment berms and remote monitoring sensors as well as tank anchoring at all of Noble’s active tank batteries in Colorado floodplains. Noble Midstream also must implement and provide periodic reports on facility-response training, drills and exercises programs at its Wells Ranch facility. The $1 million penalty will be deposited into the Oil Spill Liability Trust Fund, which is used by federal agencies to respond to discharges of oil and hazardous substances.