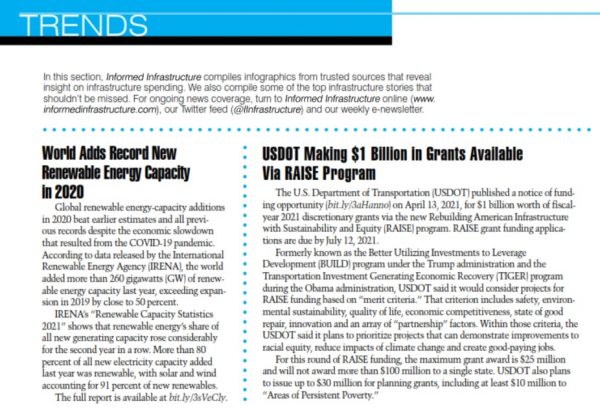 Global renewable energy-capacity additions in 2020 beat earlier estimates and all previous records despite the economic slowdown that resulted from the COVID-19 pandemic. According to data released by the International Renewable Energy Agency (IRENA), the world added more than 260 gigawatts (GW) of renewable energy capacity last year, exceeding expansion in 2019 by close to 50 percent.

IRENA’s “Renewable Capacity Statistics 2021” shows that renewable energy’s share of all new generating capacity rose considerably for the second year in a row. More than 80 percent of all new electricity capacity added last year was renewable, with solar and wind accounting for 91 percent of new renewables.

The full report is available at bit.ly/3sVeCly.

The U.S. Department of Transportation (USDOT) published a notice of funding opportunity (bit.ly/3aHanno) on April 13, 2021, for $1 billion worth of fiscal-year 2021 discretionary grants via the new Rebuilding American Infrastructure with Sustainability and Equity (RAISE) program. RAISE grant funding applications are due by July 12, 2021.

Formerly known as the Better Utilizing Investments to Leverage Development (BUILD) program under the Trump administration and the Transportation Investment Generating Economic Recovery (TIGER) program during the Obama administration, USDOT said it would consider projects for RAISE funding based on “merit criteria.” That criterion includes safety, environmental sustainability, quality of life, economic competitiveness, state of good repair, innovation and an array of “partnership” factors. Within those criteria, the USDOT said it plans to prioritize projects that can demonstrate improvements to racial equity, reduce impacts of climate change and create good-paying jobs.

For this round of RAISE funding, the maximum grant award is $25 million and will not award more than $100 million to a single state. USDOT also plans to issue up to $30 million for planning grants, including at least $10 million to “Areas of Persistent Poverty.”

A joint investigation by Consumer Reports (CR) and the Guardian US news organization of the nation’s drinking water found widespread contamination with PFAS (per- and polyfluoroalkyl substances also known as “forever chemicals”), lead and arsenic, including a significant number of samples that exceeded levels considered safe by CR and other health experts. The full report can be found at CR.org/watertest.

“CR’s research shows that the U.S. continues to face serious challenges to ensure everyone has access to clean drinking water,” said James E. Rogers, PhD, director of food safety research and testing at CR. “Far too many Americans are exposed to hazardous levels of PFAS and heavy metals in the drinking water they rely on every day. The technology exists to remove dangerous contaminants from water, but these filtration systems are not being used uniformly in communities across the country.”

CR and the Guardian set out to test tap water in the U.S. and determine the levels of PFAS and certain heavy metals from a representative mix of municipal water systems across the country. CR collected unfiltered tap-water samples from 120 volunteers around the U.S. and tested them for PFAS, arsenic, lead and other contaminants. It then compared measured levels to regulatory and health-based limits to assess the potential health risks for consumers.

Consumer Reports created an interactive tool at bit.ly/3exfBn9 that provides advice to help people find out whether their tap water has unsafe levels of PFAS and heavy metals as well as tips about filters they can use to cleanse tap water of contaminants. 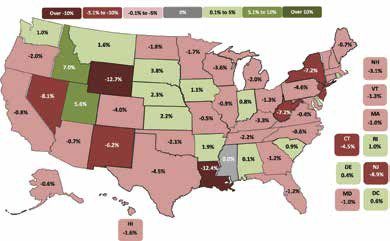 Construction employment in March 2021 remained below March 2020 levels in 35 states despite a sizzling homebuilding market and a strong recovery from severe winter weather, according to an analysis by the Associated General Contractors of America (AGC) of government employment data. AGC officials cautioned, however, that a host of challenges, including continued project cancellations, rising materials prices, and supply chain uncertainties are making business conditions for contractors difficult.

“Nonresidential contractors are coping with a depleted list of projects, extreme cost increases, and unprecedented supply chain problems,” said Ken Simonson, the association’s chief economist. “These headwinds are likely to keep industry employment in many states below pre-pandemic levels for months.”

Mercom Capital Group released its report on funding as well as merger and acquisition (M&A) activity for the global solar sector in the first quarter of 2021. Total corporate funding, including venture-capital funding, public market and debt financing, came to $8.1 billion in 36 deals, a 21 percent increase compared to $6.7 billion raised in 43 deals in Q4 2020. The increase in corporate funding was primarily due to higher debt and public market financing activity in the first quarter of 2021.

The full report can be accessed at bit.ly/3nmzhhz.

Comments are disabled
NEXT ARTICLE
ReEngineering the Engineer: Fostering Personal and Corporate ‘Sustainability’
May 10, 2021
PREVIOUS ARTICLE
Siemens Government Technologies Extends Smart Infrastructure and Energy Efficiency and Resiliency for Dyess Air Force Base
May 10, 2021