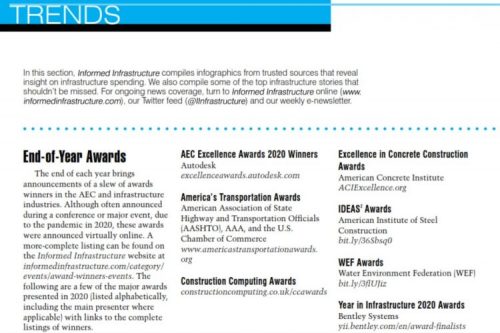 The end of each year brings announcements of a slew of awards winners in the AEC and infrastructure industries. Although often announced during a conference or major event, due to the pandemic in 2020, these awards were announced virtually online. A more-complete listing can be found on the Informed Infrastructure website at informedinfrastructure.com/category/events/award-winners-events. The following are a few of the major awards presented in 2020 (listed alphabetically, including the main presenter where applicable) with links to the complete listings of winners.

American Association of State Highway and Transportation Officials (AASHTO), AAA, and the U.S. Chamber of Commerce

The COVID-19 pandemic has had extreme consequences for the U.S. power industry, including a substantial reduction in energy demand and intensified supply side competition. Combined with the demand losses recorded in 2019, the industry will have shed the equivalent of a decade of growth. And although the industry may turn a corner in 2021, a contraction next year would be the first time in history the industry has recorded losses three years in a row, according to a new report from CoBank’s Knowledge Exchange.

Even under the most-aggressive recovery scenario, electricity demand will not return to pre-pandemic levels until 2024. The longer the road to recovery, the more likely the industry will confront outsized structural accommodation, fast-forwarding what would have otherwise been a decade-long cycle of energy transition in the U.S. dispatch stack.

The report notes that the pandemic and pressure from investors will likely accelerate the early retirement of coal and nuclear capacity while hastening the development of renewable energy generation. Read the full report at bit.ly/35LhgSR.

Current transportation system investment trends could produce dire consequences for the American people and economy, according to a preliminary report from the American Society of Civil Engineers (ASCE) accessible at bit.ly/2ITI2PK.

Through time, the effects of not keeping up with our infrastructure could cost households and industries $677 billion during the next decade and another $1.3 trillion between 2030 and 2039. In addition, with an inefficient surface transportation network, the United States could lose more than 540,000 jobs by 2040.

ASCE said the current backlog of transit investments amounts to about $176 billion and could grow to nearly $500 billion through 2039. For roads, the funding gap to rehabilitate pavement and make other operational condition improvement is $12 billion per year. According to ASCE, Congress should be spending 29 percent more than current spending levels to address the current backlog and anticipate future backlogs.

Renewable energy continues to bring socioeconomic benefits by creating numerous jobs worldwide, according to the latest figures released by the International Renewable Energy Agency (IRENA). The seventh edition of “Renewable Energy and Jobs—Annual Review” shows that jobs in the sector reached 11.5 million globally last year, led by solar PV with some 3.8 million jobs (one third of the total).

In 2019, 63 percent of all renewables jobs were recorded in Asia, confirming the region’s status as a market leader. Biofuels jobs followed closely behind solar PV, reaching 2.5 million. Many of these jobs are in the agricultural supply chain (particularly in countries such as Brazil, Colombia, Malaysia, the Philippines and Thailand) with labor-intensive operations. Other large employers in the renewables sector are hydropower and wind industries, with close to 2 million and 1.2 million jobs, respectively.

Renewables jobs have shown more inclusion and a better gender balance than fossil fuels. The report highlights that women held 32 percent of total renewables jobs as opposed to 21 percent in fossil fuels sectors. The full report is at bit.ly/35J22ha.

Despite the challenging economy, an increasing majority of U.S. engineering firm leaders (68 percent) say their firm’s finances have improved or at least remained the same since COVID-19 paralyzed the marketplace in March 2020—a significant increase over the 58 percent who affirmed the same in May 2020, according to the latest American Council of Engineering Companies (ACEC) Research Institute Business Impact Survey found at bit.ly/3nFOTLO.

Conducted from 411 engineering firm leaders nationwide between Sept. 15-17, 2020, Business Impact Survey 8 shows that a large percentage of leaders either expect declines or are uncertain regarding most engineering markets during the next 12 months. Leaders confirm that a vast majority of their offices (90 percent) are open for employees to work, but results show only 56 percent of employees are working in those offices. Three of four engineering firm leaders, however, say they are “very flexible” when accommodating remote work by staff for various reasons.