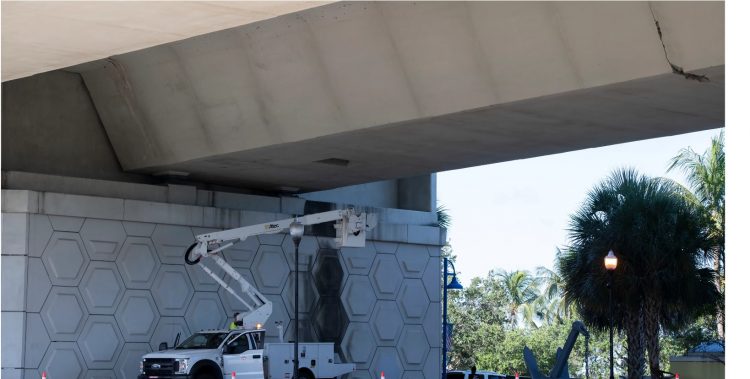 STUART — Motorists can expect at least an additional 30 minutes to be added to their commute as transportation officials attempt to repair the closed Roosevelt Bridge.

The Florida Department of Transportation Wednesday shut down the six-lane bridge after pieces of concrete fell off during the biannual routine inspection Tuesday.

Early Wednesday morning, the U.S. Coast Guard issued an alert the bridge was at “risk of imminent collapse.”

However, inspection later showed the 23-year-old fixed-span was in no danger of collapsing, officials said Wednesday afternoon at a news conference outside the office of state Rep. Toby Overdorf, R-Stuart.

“I think the statement from the Coast Guard was an overstatement made in the abundance of caution,” state senator Gayle Harrell, R-Stuart, said.

It is unclear the extent of the damage under the bridge or how long it would take to repair the structure, officials said.  FDOT also closed the old Roosevelt Bridge because it is near where the concrete fell.

No representative from the FDOT attended the news conference.

No further information was contained in the report.

Harrell said she, Overdorf and other officials will keep the project at the top of FDOT’s priority list.

“We will be working closely as a delegation to make sure that this becomes a priority for the Department of Transportation,” Harrell said. “A detailed, very in-depth, detailed inspection now is warranted, and we want to make sure that it is done at the highest level.”

In the coming days, county officials will meet to discuss how to handle traffic and the opening of hurricane shelters, should a storm approach, County Administrator Taryn Kryzda said after the news conference.

While drivers are asked to avoid the Roosevelt Bridge, Police Chief Joseph Tumminelli and Overdorf encouraged residents to continue patronizing downtown businesses. Many reopened after being closed for several weeks because of the novel coronavirus pandemic.

The bridge closing underscores the need for an alternative north/south route on the Treasure Coast.

Kryzda said it would be difficult to find a north/south route because most of the available land has been developed and the county doesn’t have the money to purchase the land needed.

“If the old bridge didn’t need to be closed, it would not be as difficult to get around,” Kryzda.

Denti was the project manager at FDOT when the $83.7 million bridge was constructed in 1997 and has been involved in every major one in Martin County since then. He was the engineer on the recently opened Crosstown Parkway Bridge in Port St. Lucie.

“I’m definitely surprised about what has happened. It’s a new bridge, and up to this point I haven’t heard of any problems with it,” Denti told TCPalm Wednesday.

Denti retired last year after a career that spanned more than 42 years working on roads and bridges.

“Generally,” he said, “when there is a failure, there is some sign like leaking, but none of that was mentioned in bridge reports.”

Height: 65 feet above the RIVER channel

Construction: Twin segmental box girder bridge. The twin spans stand on 74 piers, which, if laid end-to-end would stretch 11.7 miles and support 1,112 concrete segments weighing 80 tons each. Construction used more than 58,000 cubic yards of concrete; 1,015 miles of steel reinforcing bar; 650 miles of steel cable; and 8,500 feet of fiberglass pipe to drain 19,046 gallons of stormwater  per minute off the bridge. The bridge, with 560,000 square feet of deck for vehicles, was built to withstand winds of 200 mph.

Designer: LoBuono, Armstrong and Associates, an architectural and structural engineering firm in Tallahassee, for the Florida Department of Transportation. Others involved: Figg Engineering of Tallahassee; Reynolds, Smith & Hills of Jacksonville; Finley McNary Engineers of Tallahassee

Keona Gardner covers the cities of Port St. Lucie and Fort Pierce and St. Lucie County. Contact her at 772-221-4206 or keona.gardner@tcpalm.com with news tips.