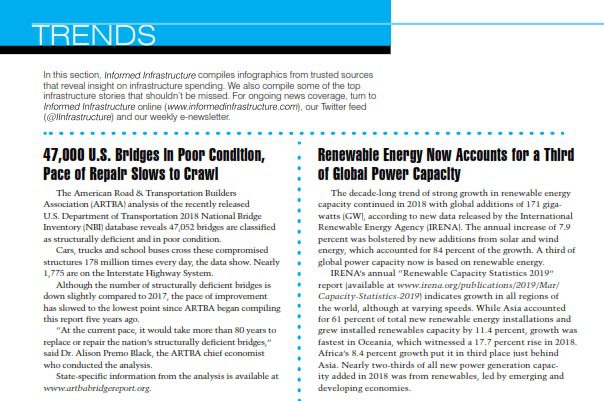 Cars, trucks and school buses cross these compromised structures 178 million times every day, the data show. Nearly 1,775 are on the Interstate Highway System.

Although the number of structurally deficient bridges is down slightly compared to 2017, the pace of improvement has slowed to the lowest point since ARTBA began compiling this report five years ago.

“At the current pace, it would take more than 80 years to replace or repair the nation’s structurally deficient bridges,” said Dr. Alison Premo Black, the ARTBA chief economist who conducted the analysis.

State-specific information from the analysis is available at www.artbabridgereport.org. 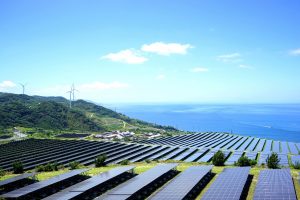 The decade-long trend of strong growth in renewable energy capacity continued in 2018 with global additions of 171 gigawatts (GW), according to new data released by the International Renewable Energy Agency (IRENA). The annual increase of 7.9 percent was bolstered by new additions from solar and wind energy, which accounted for 84 percent of the growth. A third of global power capacity now is based on renewable energy.

IRENA’s annual “Renewable Capacity Statistics 2019” report (available at www.irena.org/publications/2019/Mar/Capacity-Statistics-2019) indicates growth in all regions of the world, although at varying speeds. While Asia accounted for 61 percent of total new renewable energy installations and grew installed renewables capacity by 11.4 percent, growth was fastest in Oceania, which witnessed a 17.7 percent rise in 2018. Africa’s 8.4 percent growth put it in third place just behind Asia. Nearly two-thirds of all new power generation capacity added in 2018 was from renewables, led by emerging and developing economies.

The following are the top stories from the last few months (in terms of traffic) on the Informed Infrastructure website. This also reflects key coverage areas that are regularly refreshed online and via our weekly e-newsletter.

Comments are disabled
NEXT ARTICLE
ReEngineering the Engineer: To Change or Not to Change? The Answer Usually Is to Change
May 20, 2019
PREVIOUS ARTICLE
Letters from May 2019 Issue
May 20, 2019