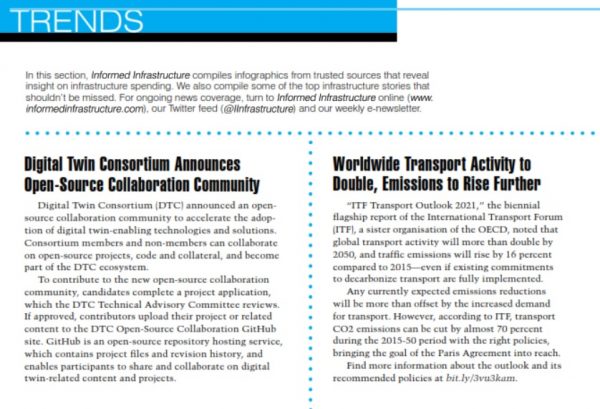 Digital Twin Consortium (DTC) announced an open-source collaboration community to accelerate the adoption of digital twin-enabling technologies and solutions. Consortium members and non-members can collaborate on open-source projects, code and collateral, and become part of the DTC ecosystem.

To contribute to the new open-source collaboration community, candidates complete a project application, which the DTC Technical Advisory Committee reviews. If approved, contributors upload their project or related content to the DTC Open-Source Collaboration GitHub site. GitHub is an open-source repository hosting service, which contains project files and revision history, and enables participants to share and collaborate on digital twin-related content and projects.

“ITF Transport Outlook 2021,” the biennial flagship report of the International Transport Forum (ITF), a sister organisation of the OECD, noted that global transport activity will more than double by 2050, and traffic emissions will rise by 16 percent compared to 2015—even if existing commitments to decarbonize transport are fully implemented.

Any currently expected emissions reductions will be more than offset by the increased demand for transport. However, according to ITF, transport CO2 emissions can be cut by almost 70 percent during the 2015-50 period with the right policies, bringing the goal of the Paris Agreement into reach.

Find more information about the outlook and its recommended policies at bit.ly/3vu3kam.

According to the latest “Quarterly Construction Metrics Index” from Viewpoint, several leading indicators suggest cautious optimism when looking at the Q1 2021 data.

In terms of project starts, backlogs are 20 percent below what they were in Q1 2020 but are slowly rebounding, and heavy highway and civil projects had 10 percent more pending projects in March 2021 than March 2020. Contract values have largely held steady since October 2020; however, they still saw a 52 percent decline as compared to Q1 2020. Hiring has been net positive in 2021, which means more employees were hired than fired, though hiring is still 12 percent below what it was a year ago.

The full report can be accessed at bit.ly/3yEg9Rb.

The Economic Costs of Freight Bottlenecks 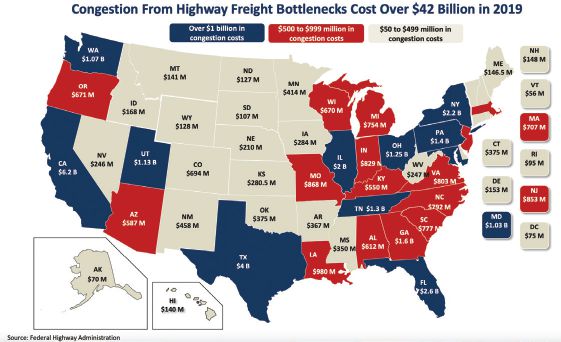 The U.S. economy lost more than $42 billion in 2019 as trucks packed with goods and products got snarled in traffic, a cost borne throughout the entire economy. Data released in late 2020 by the Federal Highway Administration (FHWA) and analyzed by the American Road & Transportation Builders Association (ARTBA) shows that congestion costs on the Interstate Highway System grew 25 percent during the last two years—from $12 billion in 2017 to more than $15 billion in 2019.

Highway freight shipments collectively experienced more than 27 million days of delay in 2019, the equivalent of nearly 75,000 years, with more than one-third of the lost time occurring on the Interstates. Nearly 73 percent of the value of domestic freight is shipped via truck, and the value of truck shipments is expected to more than double by 2045, according to ARTBA’s analysis of FHWA’s data.