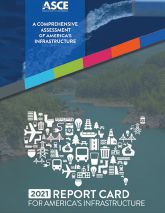 The American Society of Civil Engineers unveiled its 2021 Report Card for America’s Infrastructure on March 3, 2021. The nation earned a ‘C-’, which is up from 2017’s cumulative GPA of ‘D+’ and the first time since ASCE began issuing the report card that the nation’s infrastructure received a GPA above the D range. Between 2017 and 2021, five category grades increased while only one—bridges—decreased.

The highest grade was the ‘B’ in the rail category, while the lowest was the ‘D-’ for the nation’s transit systems. The report finds that 45 percent of Americans lack reliable access to transit services. The Report Card covers 17 categories of infrastructure pertinent to all Americans, including a new stormwater chapter and a spotlight on broadband. Eleven categories received grades in the ‘D’ range.

According to ASCE, the country’s total infrastructure needs during the next 10 years total nearly $6 trillion, but after considering various sources of committed funding, the gap to meet those needs is $2.59 trillion. If this is not addressed, America’s overdue infrastructure bill will cost each American household approximately $3,300 per year, or $63 per week.

To close this gap, ASCE calls for strong federal, state and local leadership as well as investment in infrastructure. Additionally, resilience must be a priority, as the ability to withstand or recover from extreme events is key to infrastructure survival.

To view the full report and additional data, visit InfrastructureReportCard.org.

Transportation Getting $100B From $1.9T COVID Package

The $1.9 trillion COVID-19 relief package, known as the American Rescue Plan (ARP) and signed into law on March 11, 2021, allocates $100 billion to transportation. The three main areas for transportation relief are in transit, aviation and rail (Amtrak).

“Transportation workers have been on the front lines delivering personal protective equipment (PPE), essential goods and services, and vaccines to help combat the pandemic,” said U.S. Transportation Secretary Pete Buttigieg. “The American Rescue Plan makes a historic investment in our transportation system, helping to keep workers on the job and get travelers to where they need to be. The benefits of this package are already being felt—with airline workers tearing up furlough notices, Amtrak announcing expanded routes, and critical assistance reaching those who are struggling during this pandemic.”

More than 220,000 U.S. bridges need major repair work or should be replaced, according to an American Road & Transportation Builders Association (ARTBA) analysis of the U.S. Department of Transportation’s 2020 National Bridge Inventory (NBI) database. That figure represents 36 percent, or more than one-third, of all U.S. bridges.

ARTBA finds that while the number of structurally deficient (SD) bridges declined 2.5 percent last year to 45,000, the number of bridges falling into fair condition grew more than 3,600 to almost 295,000. At the current pace, it would take 40 years to repair the current backlog of SD bridges.

The full ARTBA analysis can be accessed at bit.ly/31dBUHY, and state- and congressional-district-specific information is available at artbabridgereport.org.

The engineering and architectural industry is a significant driver of the U.S. economy, supporting $600 billion in GDP, according to a new study conducted by the American Council of Engineering Companies (ACEC) Research Institute. The engineering and architectural services sector’s 2019 revenue totaled $386 billion, adding in the indirect and induced contributions brings the total economic contribution to nearly $600 billion.

The Code Council Board of Directors, which consists of 18 government code officials elected by their peers, adopted the framework, “Leading the Way to Energy Efficiency: A Path Forward on Energy and Sustainability to Confront a Changing Climate.” This framework includes using the Code Council’s American National Standards Institute (ANSI) approved standards process to update the International Energy Conservation Code (IECC).

Future editions of the IECC will build on prior successes, including an increase of efficiency requirements by about 40 percent, or an average of 8 percent a cycle from 2006 to 2021, allowing the IECC to remain a strong avenue for communities to reach their energy-efficiency and sustainability goals globally.

The full framework is available at bit.ly/39dMtzj.

• ACI and ICRI Publish New “Guide to the Code for Assessment, Repair, and Rehabilitation of Existing Concrete Structures”