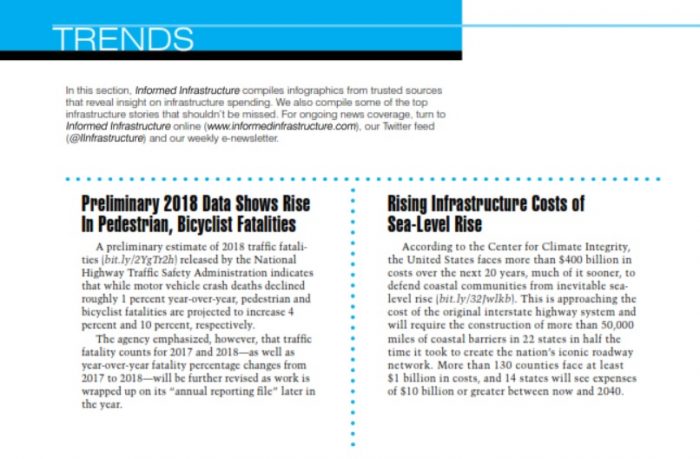 The agency emphasized, however, that traffic fatality counts for 2017 and 2018—as well as year-over-year fatality percentage changes from 2017 to 2018—will be further revised as work is wrapped up on its “annual reporting file” later in the year.

According to the Center for Climate Integrity, the United States faces more than $400 billion in costs over the next 20 years, much of it sooner, to defend coastal communities from inevitable sea-level rise (bit.ly/32Jwlkb). This is approaching the cost of the original interstate highway system and will require the construction of more than 50,000 miles of coastal barriers in 22 states in half the time it took to create the nation’s iconic roadway network. More than 130 counties face at least $1 billion in costs, and 14 states will see expenses of $10 billion or greater between now and 2040.

Increasingly, however, East and Southeast Asian countries have emerged alongside China as key exporters of solar photovoltaic panels. Countries including Malaysia, Thailand and Vietnam were responsible for a greater share of growth in renewables jobs last year, which allowed Asia to maintain a 60 percent share of renewable energy jobs worldwide. 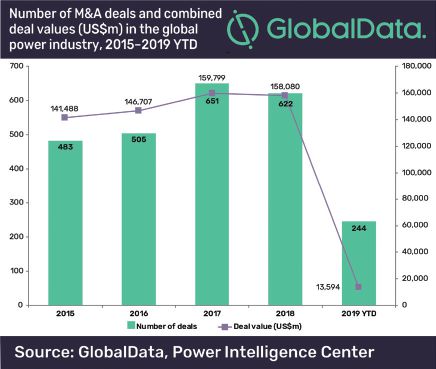 The global power mergers and acquisitions (M&A) market remained strong in 2018 with transaction volumes reaching $158 billion, the second highest in the last five years. However, the number of deals registered decreased to 622, compared to 651 deals in 2017, according to GlobalData, a data and analytics company.

A boom in U.S. freight activity is highlighting the need for transportation infrastructure investments, according to the 30th annual “State of Logistics” report compiled by consulting firm A.T. Kearney with the support of the Council of Supply Chain Management Professionals and Penske Logistics.

Michael Zimmerman, a partner with A.T. Kearney and principal author of the report, chaired a panel discussion at the National Press Club in Washington, D.C., on June 18, 2019, to discuss its findings. The report notes that U.S. business logistics costs increased 11.4 percent in 2018 to $1.64 trillion, representing 8 percent of the nation’s $20.5 trillion gross domestic product.

Dow and the U.S. Green Building Council (USGBC) announced a Carbon Challenge that looks to address increasing built environment growth by encouraging reductions in the operational carbon footprint of buildings. The Carbon Challenge award will recognize office buildings and shopping centers in North Asia (Japan, South Korea and Greater China) that have reduced carbon emissions and improved energy efficiency beyond “business as usual.”

Registration for the award will close Aug. 31, 2019. More details and the submission form can be found at www.carbon-challenge.com.

Comments are disabled
NEXT ARTICLE
Video: Dam Threatens Last Tribes of Ethiopia
August 8, 2019
PREVIOUS ARTICLE
ReEngineering the Engineer: What Am I Missing?
August 8, 2019