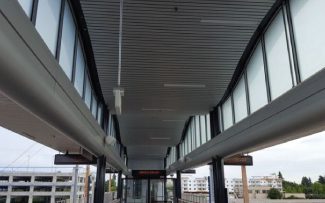 Project Information/Details: When Doug Bixel, partner and president of Forrest Sound, needed a specific ceiling solution for the newly opened Angle Lake Station in the Seattle area, he turned to Architectural Surfaces, Inc., a leading manufacturer of high-end acoustical wall and ceiling systems, and its Alumiline™ Linear Metal ceiling system. Architectural Surfaces came to the rescue for Bixel after the initial company that he was working with was unable to supply the originally specified ceiling. The Alumiline ceiling system was installed throughout the weather-exposed building, which provides frequent, reliable service to the airport, downtown Seattle and the University of Washington. “The engineering firm specified a particular ceiling to complete the aesthetic they were looking for at Angle Lake Station,” says Bixel. “When that was not possible with the original vendor, we contacted the team at Architectural Surfaces. We have worked with them for many years and knew they would be able to provide the right system for the job. The Alumiline ceiling is made from a robust material that will endure the climate in Washington for years to come.” Upon completion of the project, roughly 10,000 square feet of Alumiline was used. “The entire installation took our crew about 200 working days to complete,” says Bixel. “The installation went as expected and there were no surprises during the job. We also were able to set-up a jig to cut out exact dimensions for light fixtures that are staggered throughout the ceiling, which was a plus for us. Architectural Surfaces was also able to provide us with custom length, 13-foot planks to be used in the installation. The ceiling was designed as a sine wave and our crew provided a suspension-style ceiling and was able to manipulate the Alumiline system to meet the project needs.” Architectural Surfaces’ Alumiline Linear Metal ceiling system planks are available from stock in elegant eight-foot and 10-foot lengths, four-inch and six-inch modules, solid-color anodized finishes or wrapped in natural wood laminate replication. They can also be customized to meet the needs of any project. This industry-first in ceiling planks is made from extruded aluminum and is not pan rolled like traditional metal ceiling planks. Alumiline is an excellent choice for external applications, as the material resists high humidity applications such as soffits, car ports, swimming pools and any project that will be exposed to the elements. Acoustical control can be accomplished when Echo Eliminator™ or Quiet Liner™ is installed behind the system. 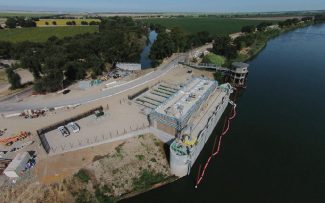 Project Information/Details: Thanks to a recently completed Joint Intake and Fish Screen Facility on California’s Sacramento River, salmon and endangered native fish are better protected, about 15,000 acres of crops are getting irrigation, and the cities of Davis and Woodland have a more reliable water supply. Located near Sacramento, CA, this project is a collaboration between Reclamation District 2035 (RD 2035) and Woodland-Davis Clean Water Agency (WDCWA), with support from state and federal water managers and resources management agencies. MWH Global, now part of Stantec, designed this important facility and performed the construction management for its completion. The $46 million project, in development for more 15 years, provides protection of smolts and juvenile fish out-migrating through the San Francisco Bay and on to the Pacific Ocean. The recently constructed intake was the largest unscreened diversion on the Sacramento River. The endangered fishery species are now protected from potential harm on more than 90 percent of the total water diverted from the river. Water flowing into the new intake flows through stainless steel slotted wedge wire screens (o.175 mm slots) designed to prevent the small out-migrating salmon, steelhead and other fish species (many listed as endangered or threatened) to remain in the Sacramento River on their journey to the ocean. The RD 2035/WDCWA Joint Intake and Fish Screen Facility is a combined 400 cubic-feet per-second diversion of river water and it replaces a pumping facility that is nearly 90 years old. The new facility allows RD 2035 to continue diverting water for 15,000 acres of farmland while allocating a portion of their historic diversion to the cities of Davis and Woodland, augmenting their current groundwater supplies and improving water quality for the communities. The new facility will allow for year-round diversions for the communities. 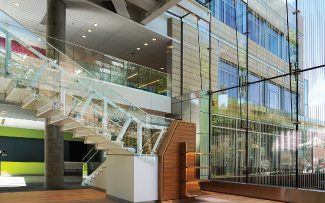 Project Information/Details: The 32,000-square-foot, terra cotta-clad structure with two large, protruding glass cubes was designed and built to meet LEED Silver standards. It houses four, fully accessible levels for library service, separate adult, teen and children’s library sections, an adult learner center on its own level, 24/7 book return, an early learning center with a play kitchen, a large international collection with materials in nine languages and an English language collection with 27,000 items for adults, 28,000 items for children and young adults and nearly 15,000 multimedia items. The new building replaces a 1906 Carnegie library that was half its size and previously stood on the site. The fireplace mantel from its children’s room was moved into the new children’s room and brickwork from its façade surround the foyer of the Broadway entrance. The structure features two green roofs, 13,000 square feet of outdoor space, and a Percent for Art art installation by the artist Allan McCollum comprised of 955 similar, yet distinct shapes cut from Grey Elm veneer plywood. In addition to Stalco and Marpillero Pollak, the project team included structural engineer Severud Associates, MEP engineer ads Engineers, lighting designer See/Arch, and landscape architect Wallace Roberts & Todd.