Project Information/Details: Project Summary Improving Citywide IT Infrastructure and Creating a Digital City With the current trend of urban development moving toward digital cities, the South Korea Ministry of Land, Infrastructure and Transportation is equipping their cities with infrastructure technology. In concert, the Ministry is implementing a citywide IT infrastructure at Hanam to advance the city’s administration and lifestyle. A digital transformation plan is also underway, considering various elements including existing city areas and innovative business zones. The project will decentralize urban housing in Seoul and contribute to the development of local communities. Pivoting from a Three-year Timeframe to a One-year Schedule The Ministry outsourced the design oversight to BasisSoft, a leading construction IT solution provider in South Korea. They were engaged to analyze and transform the existing 2D design into a 3D BIM to evaluate and improve design quality. With a project area of nearly 6.3 million square meters to build 34,000 houses, the BasisSoft team sought a software application robust enough to handle the BIM design of a very large site. Further, BasisSoft needed to pivot from the initial three-year timeframe to a one-year schedule mandated by the client. The truncated timeframe made it impossible to convert all 2D designs to 3D designs and meet delivery. As a result, they needed a software solution that was easy to use and could quickly perform the conversion. Robust Applications Help Meet Aggressive Schedule To meet the aggressive schedule, they deployed ContextCapture to process 20,000 drone-captured images of the site. They also deployed Leapfrog for 3D strata modeling and OpenRoads to handle the BIM design of the extremely large project site, which included calculating earthworks and road work, storm drains, sanitary sewers, and water supply lines. BasisSoft also used OpenBridge Modeler to facilitate structure design, as well as MicroStation for appurtenant works modeling and LumenRT for visualization. BIM Design Key to Identifying and Resolving Clashes Using the integrated BIM solution and Bentley software in their design enabled BasisSoft to uncover 50 interference instances, 30 drawing error instances, and 10 desi gn issues. Additionally, accurate visualization help them detect and resolve potential design errors that were critical in meeting the client’s aggressive schedule. 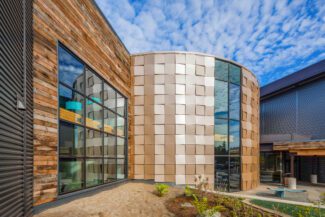 Project Information/Details: The Kenaitze Indian Tribe recently celebrated the grand opening of the Kahtnuht’ana Duhdeldiht Campus (Kenai River People’s Learning Place), its new education center in Kenai, Alaska. The center combines core educational components and programs in one state-of-the-art, central facility with a focus on the Tribal Council’s commitment to building a tribally owned, culturally appropriate education campus. The Anchorage office of integrated design firm Stantec provided architecture and interior design; surveying; and civil, structural, mechanical, and electrical engineering for the project. Stantec also completed an environmental assessment of the site. Blazy Construction was the general contractor. Spanning 67,259 square feet, the education center includes two wings connected by a central indoor plaza. The education wing has classrooms and meeting spaces to accommodate the Tribe’s Early Learning preschool, K-12 Yaghanen Youth Language and Culture Program, Community Education and Career Training, and the Dena’ina Language Institute. Supporting school and community activities, the second wing features a multipurpose room with a second-floor running track. This gathering space can house up to 300 people in banquet-style seating and is utilized for hosting tribal events, meetings, athletics, or other large events. There is also a cultural room for tribal demonstrations. “Collaborating with the Tribe and seeing the project develop from ideas and paper into its realization is inspirational,” said Giovanna Gambardella, Stantec’s principal architect based in Anchorage. “The education center is an investment in the community and the Tribe’s future. It was an honor to work with the Tribe, to weave cultural and historical elements into the design, yet provide a durable and easy-to-maintain facility. We are thrilled to see children, parents, educators, families, and elders enjoying the new center.” Cultural values central to design The Kahtnuht’ana Duhdeldiht Campus is designed as a safe place where children can achieve educational milestones while embracing the traditions of the Dena’ina culture. Every aspect of the design responds to local, cultural, and tribal values with each detail providing teaching opportunities beyond the classroom: • Reclaimed wood is repurposed from the community’s historic cannery, which emphasizes the Tribe’s longstanding fishing traditions. • A 16-foot diameter tribal seal is embedded in the lobby floor, while a 20-foot diameter rendering of the Tribe’s Traditional Values Wheel is embedded in the multipurpose room floor. • The building exterior features a custom copper color aluminum panel pattern that simulates salmon skin, a resource central to the Tribe’s identity, and the curved design references a circular sense of community. • Landscape and playground areas were designed to teach children about the natural environment. To create a warm and nurturing environment, the design emphasized a palette of natural materials throughout the light-filled space. Since overstimulation can result from the use of a strong color scheme, particular attention was paid to selecting a balanced combination of accents and natural finishes and textures. “The Tribe’s vision is ‘To assure Kahtnuht’ana Dena’ina thrive forever,’ and I can’t think of a more important way of doing that than sharing language, culture, and traditional knowledge,” said Bernadine Atchison, Tribal Council chair. The Kenaitze Indian Tribe was federally recognized as a sovereign, independent nation in 1971 under the Indian Reorganization Act as amended for Alaska. Today, the tribe has more than 1,800 tribal members who live across the Kenai Peninsula and beyond; it employs about 350 full-time and part-time employees. Stantec is ranked among the nation’s leading design firms for education projects. With 50 years of history in Alaska, Stantec has designed award-winning educational facilities throughout the state, including in many rural communities. To learn more, visit: www.stantec.com/en/markets/education. About Stantec Communities are fundamental. Whether around the corner or across the globe, they provide a foundation, a sense of place and of belonging. That’s why at Stantec, we always design with community in mind. We care about the communities we serve—because they’re our communities too. This allows us to assess what’s needed and connect our expertise, to appreciate nuances and envision what’s never been considered, to bring together diverse perspectives so we can collaborate toward a shared success. We’re designers, engineers, scientists, and project managers, innovating together at the intersection of community, creativity, and client relationships. Balancing these priorities results in projects that advance the quality of life in communities across the globe. 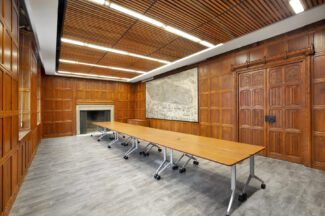