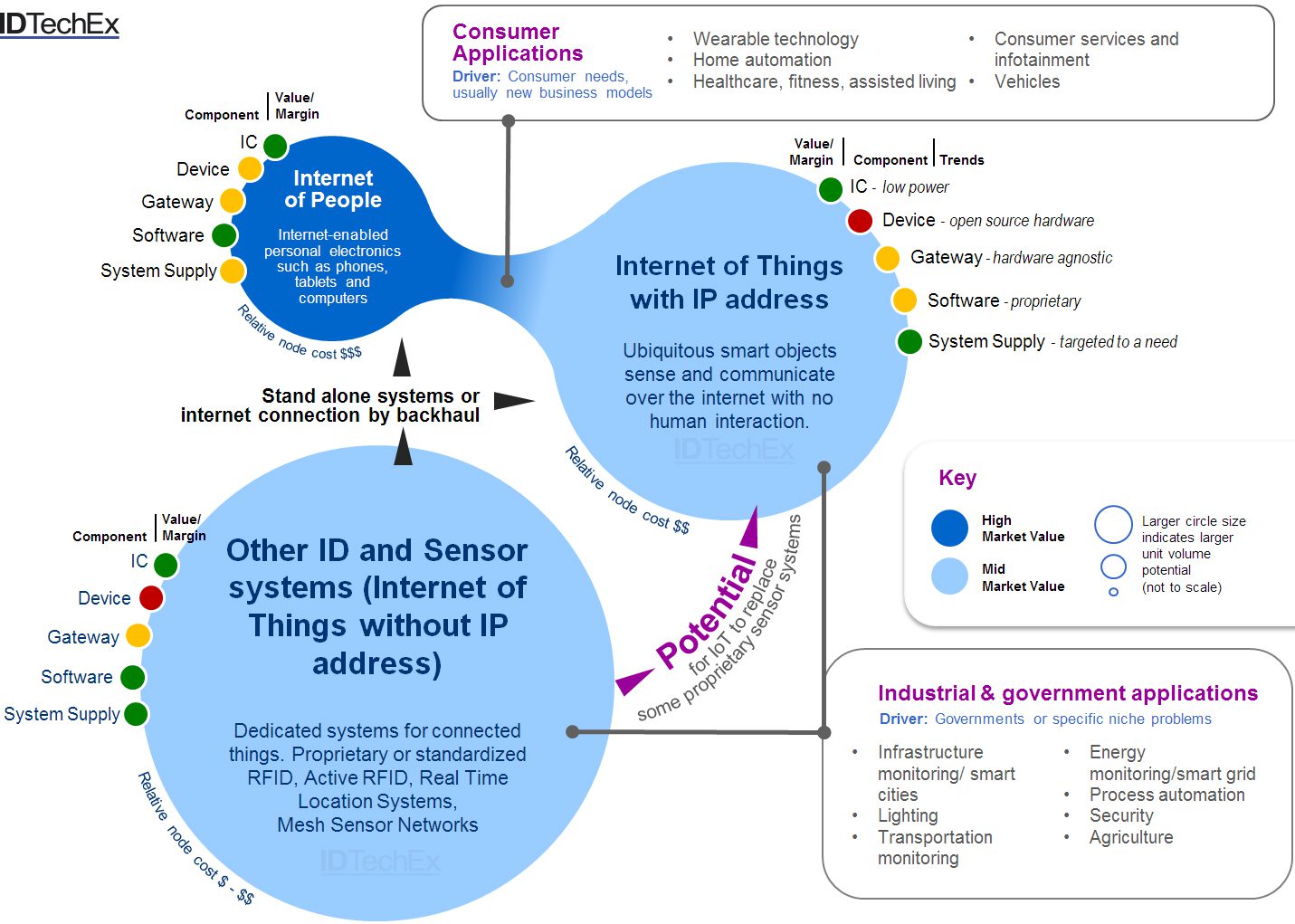 As discussed by Cymbet, a developer of solid state energy storage solution, in a white paper published (and available from the company’s website), in 2008, the number of smart devices connected to the internet exceeded the number of people on the earth. By 2020 it is estimated that this number could reach over 50 billion, although one needs to bear in mind that this number wildly varies depending on how the IoT is defined, as the concept of the IoT is still very fluid and flexible in terms of what it describes/incorporates. Regardless of definitions, many of these devices will report to central servers and databases, while other devices may communicate directly with each other and develop their own intelligence. A lot of these are devices are familiar to most, such as smartphones and tablets but most of these IoT devices will be extraordinarily small and in many cased unseen: wireless sensors, tags, beacons, each of them characterized by enormous variety of operational environments, form factors and dimensions.

Find out more as IDTechEx hosts ‘Energy Harvesting & Storage’ and the ‘Internet of Things Applications’ in Santa Clara on Nov 19-20.

But for this growth to happen, new power solutions will be required: power solutions that are small, thin, self-recharging, never need replacement are just some of the attributes that are assumed to be needed. Conventional batteries simply won’t meet the requirements for most of these new products and in addition, no one wants to be “drowned in mountains of battery waste”. An efficient, greener and effective alternative paradigm exists and that is the combination of energy harvesting solutions alongside rechargeable solid state batteries combined or wireless charging.

It is important to point out though that it is not just the devices that need to be made that need to change or evolve. A good example comes from the world of RFID, which many consider to be the first incarnation of what is today the Internet of Things, the “IoT without all the frills” if you wish.

What is changing is the increasing pressure to not use etching due to the hazardous chemicals involved. For example, many countries have stopped etching due to high government enforced prices for waste disposal. They have therefore outsourced etching to other countries but even in China now the government has started restricting the use of etching in some major cities. Stamped antennas are limited to simple antenna designs.

In parallel, new inks for printed antennas are becoming available – such as copper based inks, in addition to curing processes to allow the ink to be dried quickly and effectively. Copper, being cheaper than silver, can result in antennas being lower cost than etching and foil stamped antennas. However, it requires new capital investment vs depreciated existing equipment so the payback depends on volume of antennas produced. The passive UHF RFID market will be around 4 billion tags this year, up from 3 billion last year (IDTechEx data), so volumes are growing quickly which helps justify the new equipment cost. Early this year, Muhlbauer and NovaCentrix announced a copper printed antenna RFID equipment line, which will be available from next year, if not earlier. IDTechEx believe that printed antennas can therefore become more than 50% of the passive UHF market ten years from now, but it is dependent on the base price of copper – if it becomes too high alternatives may be more cost favourable, but either way it will come to be a larger part of the way RFID antennas are made, particularly at UHF.

In addition, IDTechEx has observed increased effort into:

–    printing other components and not just the antennas, such as printed sensors, memory and logic, storage devices (making batteries thin, flexible and laminar, there’s worldwide effort in this space both for primary and rechargeable cells)

–    Integration of components into complete solutions, allowing for devices to incorporate some or all of the components to be chosen from a range of features a wireless beacon might need:  sensing, ICs, batteries or supercapacitors, the relevant energy harvesters when necessary or when the operational environment is favourable along with power management, it is becoming clear that the marriage of all these technologies that might look too diverse at a first glance is enabling wider proliferation of sensors, tags, NFC components, all things that are in essence “IoT”.